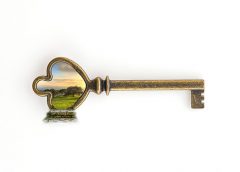 Despite being undemanding to perform, the Prayer is the key to bliss in this life and in the next.

“The Fourth Word” from the Risale-i Nur Corpus

In the Name of Allah, the Merciful, the Compassionate

Prayer is the mainstay of religion1

If you wish to grasp, by the same certainty that tells you that two and two is four, how sublime is the worth of the Prayer2 and how great its importance, how easy and undemanding it is to perform, and how it is the case that a person who does not do the Prayer is insane and in loss, then direct your attention to this short allegory, and contemplate its meanings.

A great ruler once sent two of his servants to reside in his beautiful private farm, lying a distance of two month’s journey away. They had each been given twenty-four golden coins, and the ruler had ordered them to spend the money on tickets, and on the expenses of travel on the road, as well as the purchase of certain things necessary for their stay. A day’s travel away lay a station. There they would find a car, a ship, a train and an aeroplane – each of which could be boarded, according to one’s financial capacity.

After they have been given these instructions, the two servants set off. One of the two was fortunate in spending only a very little money before his arrival at the station. What is more, on the basis of that expenditure alone, he would end up obtaining a successful business, winning him the admiration of his master, and increasing his capital from one to one thousand.

The other servant was, however, both wretched and reckless. Before he had even arrived at the station, he had already spent twenty-three of his gold coins. He had thrown it all away on gambling and amusement, and had lost it all. He was left with only one golden coin, at which point his companion said to him:

‘Oh you! Spend this coin of yours on a ticket for travel, so that you won’t have to stay on this long road, starving, and on foot! Our master is generous, perhaps he will have mercy on you and pardon your incompetence, and put you on a plane that lands us, in a single day, in the place we are going to stay. Otherwise you will have to go off by yourself, on foot, and starving, through a desert which will take you two months to cross!’

Would not even the very stupidest of people be able to perceive that this man would have to be surpassingly unintelligent, unfortunate, and a loser, if he were to be so obstinate, and refuse to spend his single gold coin on a ticket that would be equivalent to the key to a treasure, spending it rather on debauchery for the sake of a fleeing pleasure?

O you, then, who abandons prayer, and O my own lower self, that does not like to pray!

[The meaning of the allegory]

That ruler is our Lord and Creator. One of these two servants represents a truly religious person performing his prayer with deep yearning. The other represents the type of heedless person who does not perform the Prayer.

The twenty-four golden coins are the twenty-four hours that make up each day of one’s life. The private farm is Paradise. The station is the grave. The travelling represents the journeying of humankind, which moves from the grave to the Day of Resurrection3 – and on into eternity.

[The degree of a man’s godfearingness determines the speed with which, after death, he will traverse the road to his final destination]

All will traverse that long road, at a speed that varies according to the actions and the degree of godfearingness4of each individual. A group of the people of godfearingnesstraverse, like lightning, the one thousand years march in one day. Another group pass over, like inventions of the imagination, the distance of fifty thousand years in one day. The Sublimely Glorious Qur’an indicates this reality in two of its verses.5

As for that ticket: it is the Prayer. After all, a single hour is sufficient time to perform the five prayers, including their ablutions.6

How much this person loses, and how much he wrongs himself, who spends twenty-three hours for this worldly life of such extreme brevity, and cannot bring himself to spend a single hour for the sake of Eternal Life!  How contrary is his conduct to all principles of intellect!

Let us suppose that the intelligence assents to one’s spending half of one’s wealth, gambling in a lottery in which a thousand other people are participating, despite the likelihood of winning being only one in a thousand.

How contrary would the conduct of such a person be, then, to common sense and any notion of wisdom, if he were not to spend a mere twenty-fourth of his wealth for the sake of a treasury that is eternal, when the prospect of winning has been verified as being ninety-nine out of a hundred? How far from intelligence would such a person be! Would not a man who considers himself to be a person of discernment be able to discern this?

Indeed, a great comfort to the spirit, the heart, and the mind lies in the Prayer. It is, moreover, hardly heavy work for the body. The permissible,7 mundane actions of a person who performs the Prayer with a sound intention are counted as worship. Such a person can thus turn his entire lifetime’s capital into gain for the Hereafter – making his transient life, in one way, eternal.

2. (al-salāh) ‘the Prayer’ in Islam is a cycle of rhythmic standing, bowing, prostration and sitting accompanied by invocations and recitation from the Qur’an. The particular form of the Prayer was transmitted to the Prophet, upon whom be blessings and peace, by the Angel Gabriel. Although one may engage in supererogatory Prayers at almost any time, the obligatory Prayers take place within five specific times throughout the day.

3. (al-hashr) the Resurrection – the day on which the dead will rise from their graves to face Allah’s final Judgement

6. (wudū’) Ablutions – a cycle of ritual washing with water of the face, arms, head and feet the performance of which is a necessary condition for the validity of the Prayer. See Qur’an al-Ma’ida 5/6.