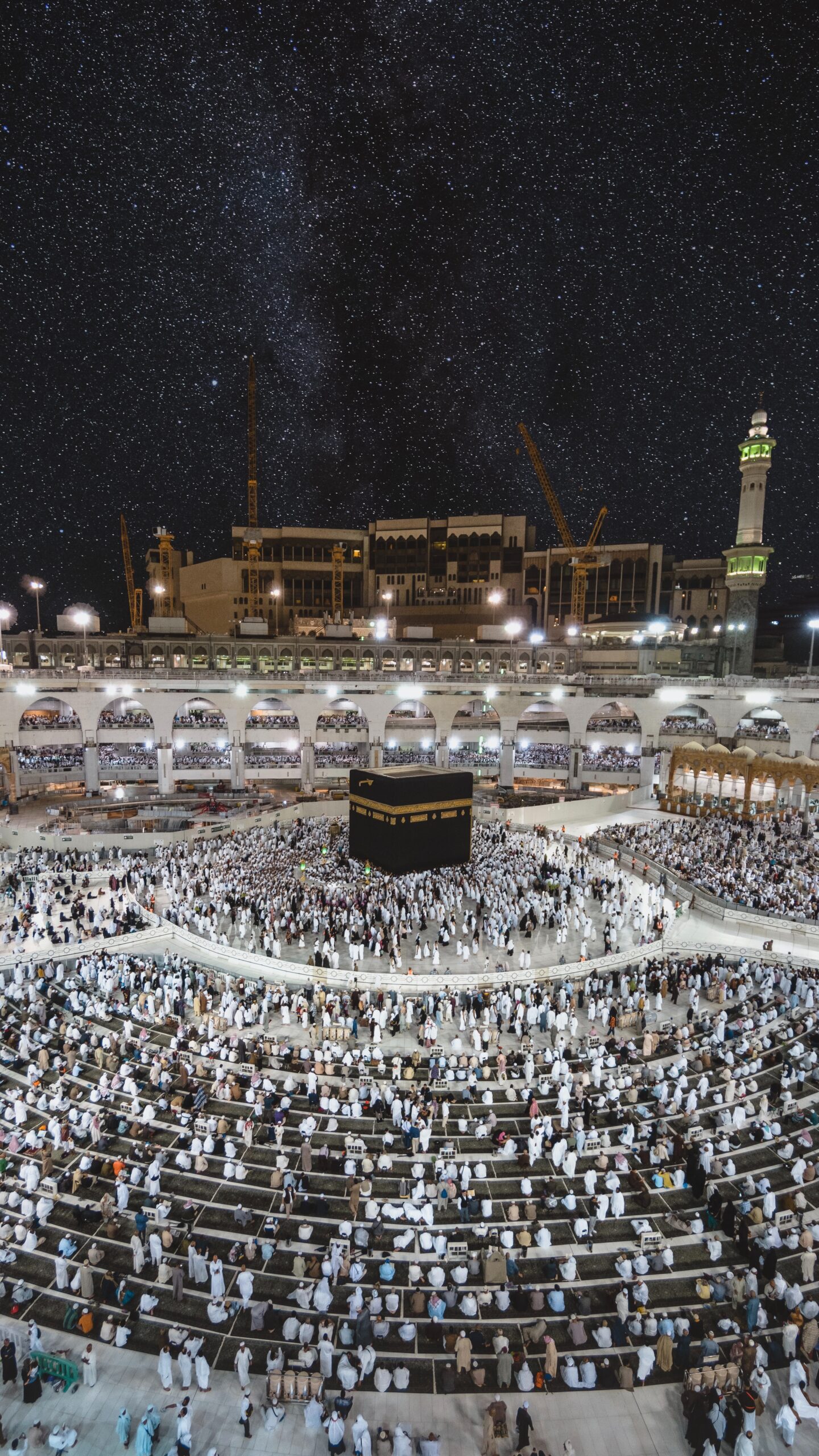 As an Islamic term Hajj means the worship done in the Hijri month of Dhul-Hijjah by accomplishing some religious duties in accordance with their conditions and methods properly in Ka’ba, Arafat, Muzdalifa and Mina.

“Wherein are plain memorials (of Allah’s guidance); the place where Abraham stood up to pray; and whosoever entereth it is safe. And pilgrimage to the House is a duty unto Allah for mankind, for him who can find a way thither. As for him who disbelieveth, (let him know that) lo! Allah is Independent of (all) creatures.” (Surah Al ‘Imran, 3:97)

Hajj is one of the five pillars of Islam

Hajj (pilgrimage) is one of the pillars of Islam. So, it’s an order of Allah (swt) that is fardh like prayer and fasting.

It is narrated on the authority of ‘Abdullah son of ‘Umar (ra) that the Messenger of Allah (pbuh) said: “(The superstructure of) Islam is raised on five (pillars), testifying (the fact) that there is no god but Allah, that Muhammad is His bondsman and messenger, and the establishment of prayer, payment of Zakat, Pilgrimage to the House (Ka’ba) and the fast of Ramadan.”  (Sahih Muslim, Book 1, Hadith 20)

Visit to Ka’ba is peculiar to Muslims. In Christianity and Judaism there is not an obligatory duty of Hajj in accordance with the Islamic doctrine.

“He who possess enough food for the trip, a means of transportation to reach to Makka, and yet does not perform Hajj, then he dies, he would then die as a Jew or a Christian” (At-Tirmidhi, Al-Bazzaar)

Hajj is one of the most superior deeds

Hajj is expiation for sins

Narrated Abu Huraira: Allah’s Messenger said, “Whoever performs Hajj to this House (Ka’ba) and does not approach his wife for sexual relations nor commits sins (while performing Hajj), he will come out as sinless as a newly-born child (just delivered by his mother).”  (Bukhari, Book 28, Hadith 45)

The reward of Hajj is nothing except “jannah”

Hadrat Abu Huraira (ra) reported that Allah’s Messenger (pbuh) said: “(The performance of) ‘Umra is expiation for the sins committed (between it and the previous one). And the reward of Hajj Mabrur (the one accepted by Allah) is nothing except Paradise.” (Bukhari; Umra; 1) (Muslim, Tirmidhi, Nasai, Ibn Maja)

If a woman succeeds in performing her Hajj in sincerity without committing sins, she is regarded to have achieved her best jihad.

Narrated Hadrat ‘Aisha (ra) (the mother of the faithful believers): I said, “O Allah’s Messenger! We consider jihad as the best deed.” The Prophet said, “The best jihad (for women) is Hajj Mabrur.” (Bukhari; Hajj; 595)

Narrated Hadrat ‘Aisha (ra) (mother of the faithful believers): I said, “O Allah’s Messenger! Shouldn’t we participate in Holy battles and jihad along with you?” He replied, “The best and the most superior jihad (for women) is Hajj which is accepted by Allah.” Hadrat ‘Aisha added: Ever since I heard that from Allah’s Messenger I have determined not to miss Hajj. (Bukhari; 29;84)

‘Aisha (May Allah be pleased with her) reported Allah’s Messenger (may peace and blessings be upon him) as saying: “There is no day when Allah sets free more servants from Hell than the Day of ‘Arafa. He draws near, then praises them to the angels, saying: What do these want?” (Muslim; Book 7, Hadith: 3126)

The day of ‘Arafa is a quite important day for Hajj. Waqoof which is the essential pillar of Hajj is performed on the Day of ‘Arafa in the afternoon till sunset. Hajj duty of a Muslim who misses waqoof is not valid.

Millions of Muslims from all over the world supplicate, pray and worship Allah (swt) on the same day, at the same place, ‘Arafat, and Allah (swt) bestows His pardon upon so many servants on the blessed day of ‘Arafa.

Hajj is a worship which even the babies are rewarded

Narrated Ibn ‘ Abbas: “Dhul-Majaz and ‘Ukaz were the markets of the people during the pre-Islamic period of ignorance. When the people embraced Islam, they disliked to do bargaining there till the following Holy Verses were revealed: There is no harm for you if you seek of the bounty of your Lord (during Hajj by trading, etc.)” (2.198)  (Bukhari, Haj, 822)

As mentioned in the ayah, Muslims are allowed to engage in trade and business during the holy days of Hajj. However, surely it shouldn’t prevent pilgrims from fulfilling the obligations of Hajj.  The prohibition of trade is peculiar to the Jumua hour.

Hajj is getting to know the Prophet and His Companions closely

Hajj is a worship that inspires deep contemplations to Muslims since it is performed in holy places where the beloved Prophet (asw) and his blessed companions (ra) fulfilled their honourable duty.

The worship of Hajj is to know the “collective personality of the Messenger of Allah (pbuh)” with a certain knowledge that is the source of the bliss and the intercession of this ummah.

What we should understand from the expression of “the collective personality of the Prophet” is his dawa (mission) and his being the prophet of the past and the future.

The world is like a masjid (mosque) of which the imam is the Blessed Prophet Muhammad (pbuh).

Mecca is its mihrab (altar) where Islam has arisen and that’s the place where the Prophet led the mankind to learn the tenets of faith.

Madina is a minbar (pulpit) where Islam started to be implemented and where Islamic social ethics were taught and founded in social life.

Visiting these holy places with such deep contemplations surely help Muslims gain a sincere and certain knowledge of the Prophet (pbuh) and his Beloved companions.

Hajj reminds the Day of Judgement

Hajj is like a rehearsal of the Grand Assembly on the Day of Judgement. Rituals in Hajj are like symbols reminding the Judgement Day. The holy house Ka’ba in the season of Hajj reminds the “mahshar” (the great field of gathering).

Journey to Hajj reminds the journey of man from this world to the hereafter. “Ihram,” the hajj dress, resembles the shroud.  “Waqoof” in Arafat and Muzdalifa are reminders of the qiyamah (doomsday) and mahshar. “Talbiyah” [the prayer starting like Labbayka Allāhumma Labbayk] is an expression of submission to Allah (swt). “Tawaf” (circumambulation of Ka’ba) is like an example of angels circumambulating the Arsh; touching, kissing or pointing at Hajar al Aswad (The Black Stone) stand for our loyalty to our promise; “Sa’i” between Safa and Marwa stands for the merits (thawabs) and sins, and the heart’s shuttling between nafs (lower-self) and spirit. Sacrificing an animal represents the sacrificing the nafs by attaching to worship and salvation of our organs from hell in return for the organs of the sacrificed animal.

During Hajj, all pilgrims, whatever their nations, languages, colours, ranks or social statues are, wear in the same dress “ihram” that resembles the grave cloth. The Hajj field full of people in ihram manifests the fact mentioned in the ayah “Every soul will taste of death.” (Surah Al ‘Imran, 3:185) Such a deep and practical reflection of death is a great and effective means of sincerity, devotion, submission that lead to a strong belief.

Through Hajj, a Muslim gets to comprehend the real meaning of “Allahu akbar”

“The frequent declaring of Allahu akbar, ‘Allah is Greater’ during the Hajj is for the above reason. For the blessed Hajj is worship at a universal level for everyone. Just as on a special day like a festival a soldier goes to the king’s celebrations like a General in the sphere of General, and receives his favours; in the same way, a Hajji, no matter how lowly, is turned towards his Sustainer under the title Mighty Sustainer of every region of the earth, like a saint who has traversed all the degrees. He is honoured with universal worship. For sure, the universal degrees of dominicality opened with the key of the Hajj, and the horizons of the tremendousness of Godhead which are visible to his eye through its telescope, and the spheres of worship which gradually unfold to his heart and imagination through its observances, and the heat, wonder, awe, and dread of dominicality caused by the levels of sublimity and last stage of manifestation, can only be quietened by ‘Allahu akbar! Allahu akbar!’, and those observed or imagined unfolded degrees can only be proclaimed by it. After the Hajj, this meaning is found in various exalted and universal degrees in the ‘eid (festival) prayers, the prayers for rain, and those recited at solar and lunar eclipses, and in prayers performed as a congregation. Thus, the importance of the marks and observances of Islam, also even if of the category of Sunna, lies in this reason.” (Bediuzzaman Said Nursi, The 16th Word)

Hajj is a way of character education

Hajj, as well as being an obligatory duty, is a way of education as well. Hajj establishes good morals and produces numerous social benefits that bring about a great deal of good to Muslim individuals and society.

A pilgrim faces many difficulties, hardships and tough situations during the preparation period, journey and rituals during Hajj which teaches him to be patient and submissive, gentle and permissive, and how to control his temper and keep calm.

Hajj is like an international conference with millions of Muslims gathered from quiet different cultures and habits. In Hajj, pilgrims learn to focus on the common points and keep the unity, real brotherhood and harmony despite the differences, and see that there are actually no real differences between them, and every human is same and equal before Allah. Hajj is also a great opportunity to meet Muslims from different countries and share their ideas, feelings, learn more about other Muslim countries.

Hajj removes all kinds of differences and provides the unity of Muslims. Two million people from hundreds of different countries and different nations, different colours and different cultures gather at the same place for the same purpose; they wear the same dress and turn to the same Qibla [Ka’ba]. They share the same feelings and same actions. They call the same unique Lord and follow the steps of same Prophet (pbuh). No matter they are rich or poor they are equal in duties and rights. All of these make Muslims realize that they are actually nothing but brothers to each other in Islam. So, Hajj establishes a sincere brotherhood among the Muslims and obviously manifests that Islam is a religion of unity and solidarity.