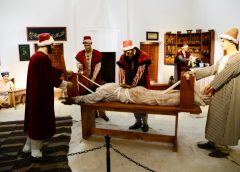 Dar al Shifa , as it is used in the Ottoman, can be described in the simplest term as the place that offers health service to public. “Darussifa” is also named “Shifakhane,” “Mâristan,” “Bîmaristan,” “Dârüssıhha,” “Dârülâfiya,” “Me’menülistirahe” and “Dârüttıb” in Anatolia.

Having gathered under the name of Dar al Shifa , these institutions became reliable healthcare organizations that had trusted and reassuring staff. These healthcare organizations offered health service without any discrimination of religion, language and race. It was always a condition for the doctors to work here that they must be knowledgeable about medical science and skilled in surgery. Music, water sound and scent therapies were used to treat psychological patients; and this was mentioned even in their waqfiyya (legal document setting up a waqf or endowment charter). Another important duty of these healthcare organizations was to produce medicines for treatments in their own places. These medicines were given to patients within the conditions decided by the waqf.

One of the main objectives of “Dar al Shifa” was to give medical science education. Although the educational method was based on master-apprentice relationship at the time- and this was institutionalized- the mudarris (professor) had to have ijazah (diploma), a condition for being able to teach there.

It is known that the “Dar al Shifa” built in Anatolia in Seljuk and Ottoman times continued their function as equally good as the Nizamiyya madrasas’ scientific hierarchy.

It is known that the Ottomans ensured Dar al Shifa institutions taken over from the Seljuks to continue their function and carry out the medical education and health services with the understanding of social relief to the end.

We see that one of the common characteristics mentioned in the wakfiyyas is that they charged no money for the recovery of the patients in the Ottoman darussifas which ran with waqf incomes and without any state subsidy. On the one hand, treatment of in patients continued; on the other hand, outpatient polyclinics went on in certain days that the patients were given necessary medicines for free as paste, syrup, pill or sugar-coated pill. Daily medicine and kitchen costs were set aside in proportion to the incomes of the waqf of these Dar al Shifas.

In this kulliya the main construction is darussifa. In order to train doctors in darussifa a medicine Dar al Shifa, Medrese-i Etıbbâ, to teach basic sciences of the time, was founded. The equivalent of these two units, which completed each other as theory and application, is medical faculty today. The students studying at the madrasa were trained by the specialist physicians in Dar al Shifa.

The architect of this collection of buildings, which attract attention with multiple domes, is Architect Khair al Din.

Sultan Bayezid II Kulliya is one of the most important healthcare, education, social and religious institutions. The kulliya included hospital, medical science madrasa, mosque, guest house, public kitchen, public bath and bridge. Planned as a multipurpose kulliya, it reflects the understanding of social state at the time. Patients were treated in its hospital; students were trained in its madrasa; prayers were performed in its mosque; guests were hosted in its guest house; the poor were fed in its kitchen. Dar al Shifa , which was a central hospital aiming at providing much service with few staff- and its needs were considered and planned in detail in this area, is a first in the world. Similar facilities started to be built in the West 200 years later.

Soothing tones of music and water sound echo at the stone walls and become a healing in this hospital. A deep-rooted understanding of musical therapy, which traces from Ibn Sina to Farabi, from the Seljuks to the Ottomans, is successfully applied for the treatment of physical and psychological illnesses. This hospital, which Awliya Chalabi described as “There is such a Dar al Shifa [in Edirne] that it cannot be described by tongue and cannot be written about by pen,” continuously healed patients for 400 years.

Edirne Dar al Shifa was a multipurpose hospital from the beginning. There was one head doctor, two doctors, two surgeons, two eye doctors and two pharmacists among the staff. Head doctors were paid 30 coins; other doctors were paid 15 coins per day. There were 21 staffs in total. The hospital had 32 beds for patients. This practice resembles to the training and operative hospitals of today.

Students having education in medical science madrasa also completed their education in darussifa with master-apprentice relationship.

Awliya Chalabi  writes in his book, “There are students of the medical school in the kulliya that every one of them are mature physicians who always discuss works of scholars such as Plato, Socrates, Philip of Opus, Aristotle, Galen and Pythagoras. The physicians, each being a specialist in a different field, try to find out the best treatment by studying valuable scientific literature on medical science.”

The madrasa of the kulliya was one of the most important medical schools and trained doctors for the hospital. In terms of significance level it was among “the sixties”- a high level in the Ottoman. Madrasa professor was paid 50 coins, and his deputies 7 coins per day. There are three deputy staffs apart from educational staff. And the students were given two coins per day.

This home of remedy, which gave healing to the patients for long years, turned into a centre where only mentally ill and psychopathic patients were treated.  The most significant feature of this hospital is that music, water sound and scent therapies were also used along with the medical knowledge of the time.

A group of ten singers and musicians gave concerts three days of the week to patients and the mentally ill to cure them. They sang and played differently according to the types of illnesses. For instance, Rast for convulsion and paralysis, Irak for angry patients, Rahawi for headache, Zangula for heart diseases, Isfahan for intelligence.  The medicine books studied in this madrasa, many of which were donated by Sultan Bayezid II, reached the present day. 37 books that tell about the medicine of the time are today in the Selimiye Manuscripts Library.

Today it is used as a “Health Museum” under Trakya University.

* Kulliya: a collection of buildings of an institution usually composed of schools, a mosque, lunatic asylum, hospital, kitchen, etc.