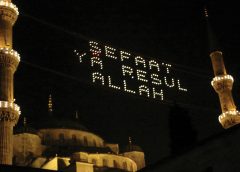 Sayyid Sharif Jurjani defines intercession in Tarifaat as follows: “Shafā’t (Intercession) is to ask forgiveness of sins which are serious crimes.” Tahanawi defines as “To ask through supplication that someone, other than one’s own self, is freed from harm or is bestowed with a blessed state.” (Keşşafu Istılahatu’l-Fünun, V. 1, p. 1034)

The translator of Qamus-ul Muhit, Asım Efendi says, “According to the statement of the writer in Basair, “شفاع” (shafā’) means “شفع” (shaf’) which means being an assistant and a helper to a person, or being associated with him as an asker and a wisher; afterwards it is used in the meaning of “making a wish about a sinner or someone who is needy.”

In short, intercession means “helping, making a wish about someone, and mediating.”

Today, shafā’t (intercession) mainly means “our Prophet’s wishing and praying to Allah for his ummah (community) to be forgiven on the Day of Gathering.”

Those who deny intercession

As far as it is known in Islamic history, the only group who denied “the intercession of our Prophet (or other Prophets) for his community on the Day of Gathering” is the Muʿtazila. Scholars of the people of Sunnah disproved this idea of Muʿtazila with much evidence of reason and narration, and they silenced this deviant group. However, today we come across some people who are influenced by Muʿtazila and deny the intercession like that group and often ask the question “Is intercession a reality?” Let’s throw light on this subject with the help of verses of the Qur’an and hadiths of the Prophet (pbuh) which reveal the reality of intercession.

Intercession at the Place of Gathering

We can group the people at the Place of Gathering into three: the disbelievers, those who sin frequently and deserve Hell (temporarily though), and those who have lots of good deeds and deserve Paradise.

The disbelievers do not deserve to be forgiven because of their disbelief. They will not be forgiven, and nobody will intercede for them. There are some verses which deny intercession. These verses are for the people of disbelief. For example: “So there will not benefit them the intercession of [any] intercessors.” (Muddaththir, 74:48)

As to those who have lots of good deeds and deserve Paradise, they do not need intercession as a matter of fact.

About those who have lots of sins and deserve Hell, there are many verses and hadiths which tell that some of those people will be interceded to be forgiven through the intercession of our Prophet (pbuh) or other Prophets.

First, let’s mention the verses which are evidence of intercession:

Our Prophet and intercession

It is said in the 64th verse of Surah Nisa: “And if, when they wronged themselves, they had come to you, [O Muhammad], and asked forgiveness of Allah and the Messenger had asked forgiveness for them, they would have found Allah Accepting of repentance and Merciful.”

In the 19th verse of Surah Muhammad (pbuh) it is said: “So know, [O Muhammad], that there is no deity except Allah and ask forgiveness for your sin and for the believing men and believing women.”

The command of “ask forgiveness” to our Prophet indicates that his prayer is going to be accepted. This is because Allah would not say “ask forgiveness” and then reject that prayer. It doesn’t matter whether this “asking forgiveness” is in the world or the Hereafter. Saying that it is “only a prayer in the world” is a baseless claim and wrong.

What is meant by the intercession of the prophets in the Place of Gathering is that they intercede and pray for their followers. We have already mentioned that the word intercession means praying and mediating. Saying that “Prophets cannot pray at the Place of Gathering” is baseless. Additionally, this claim is dangerous, because it is contrary to the Qur’an and hadiths.

It is mentioned at the end of Surah Ma’idah that Prophet Isa (Jesus) (as) will say the following at the Place of Gathering: “If You should punish them – indeed they are Your servants; but if You forgive them – indeed it is You who is the Exalted in Might, the Wise.” (Ma’idah, 5:118)

These are words of prayer. If the Prophet Isa (as) prays, Prophet Muhammad (asw) who was sent as mercy to the worlds will of course pray, in a wider and more general way, for his ummah to be forgiven. And it should not be denied that this prayer will be accepted.

As a matter of fact, scholars have interpreted the verse “And from [part of] the night, pray with it as additional [worship] for you; it is expected that your Lord will resurrect you to a praised station” (Isra, 17:79) as intercession. Imam Suyuti mentioned twenty hadiths in his “Ad-Durrul Mansur” that explains ‘Maqam al-Mahmud’ as the greatest intercession. (ibid. V 5, p. 324)

Many hadiths scholars, Bukhari and Muslim being in the first place, narrated hadiths about the intercession of our Prophet (pbuh) on the Day of Judgement. Kanz al-Ummal, which is accepted as the biggest hadith collection in the Muslim world, has many hadiths about intercession in the 14th volume from page 390 to 415 and 628 to 640. There are 86 hadiths in total. These eighty six hadiths can convince everyone who has faith and conscience.

Kattani, in his hadith book “Nazmu’l-Mutanasir Fi’l-Ahadisi’l-Mutawatir,” says that the hadith “Every prophet has an accepted prayer in the presence of Allah. Every prophet made their prayers in this world. However, I kept my prayer for the Hereafter to intercede for my ummah in the day of judgement,” is narrated as a sound hadith by Abu Hurayra, Anas, Jabir, Abdullah ibn Amr, Ubada ibn Samit, Abi Said Al-Hudri, Abdurrahman ibn Abi Ukayl (radiallahu anhum ajmain).

Moreover, in the frightening atmosphere of the Place of Fathering, the well-known hadith that mentions “people will come to the prophets and ask for help, and then finally they will come to our Prophet (pbuh) and ask for intercession” is a muttawatir hadith which has been narrated by twelve companions. For more on this subject, the aforementioned book of Kattani can be consulted.

It is an accepted method by all the scholars that the Qur’an is interpreted first with the Qur’an itself, then with the Hadith, and then with the words of the companions. Interpreting the verses of the Qur’an without consulting the sound hadiths or by opposing these hadiths is heresy.

In short, the verses and the hadiths we have mentioned until here clearly show that those whom Allah is pleased with and allows are going to intercede at the Place of Gathering in the Hereafter.

Generality and Particularity in the Qur’an

There are some statements of the Qur’an that although they seemingly express generality, they in fact have exceptions or particular situations. A general ruling is sometimes restricted by another verse or hadiths and thus the ruling is made particular (but without evidence this is not done). Those who who are unaware of this produce wrong rulings and go astray through those verses. Moreover, they accuse people who do not accept their ideas with going astray as it is the case with the subject of the intercession.

For instance, there are many verses which say “give Zakat.” Although the order of zakat is seemingly a general command to all Muslims, it is actually a particular command only to the rich. Similarly, the 97th verse of Surah Ali Imran is as follows: “And [due] to Allah from the people is a pilgrimage to the House – for whoever is able to find thereto a way.” The word “people” is general in this verse. However, children and mad people are exceptions to the rule although they are “people” as well.

In the 38th verse of Surah al-Ma’idah it is said “[As for] the thief, the male and the female, amputate their hands in recompense for what they committed as a deterrent [punishment] from Allah.” This verse is general. Apparently, even the hand of a person who has stolen an egg needs to be amputated. However, this ruling has been made particular to “certain amounts of theft” by the hadiths.

In the 173rd verse of Surah al-Baqarah it is said that “the flesh of dead animal” (maytah) is forbidden to be eaten. According to this verse, fish should have been forbidden because they are not slaughtered. However, hadiths say that the fish can be eaten, thus making the extent of the verse particular.

There are many similar examples in the books of usul al-fiqh that the Qur’an mentions a generality and then in another verse it narrows down this generality.

Those who deny intercession will present the following verse as their evidence: “O you who have believed, spend [in the way of Allah] from that which We have provided for you before there comes a Day in which there is no exchange and no friendship and no intercession. And the disbelievers – they are the wrongdoers.” (Baqarah, 2:254)

However, this verse is narrowed down in the following verse: “Who is it that can intercede with Him except by His permission?” This means that there is no intercession without the permission of Allah.

We should evaluate these kinds of verses according to the principles we have mentioned above.