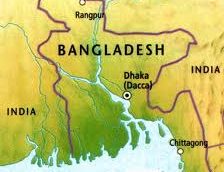 By grace of Allah, I had the opportunity to visit Bangladesh for the Eid-ul Adha between 13-19 November to attend a qurban organization conducted by the Social Agency for Welfare and Advancement in Bangladesh (SAWAB) all over Bangladesh. I would like to mention about some facts regarding Bangladesh as well as my impressions and views that I acquired during my journey.

In the past, East Bengal was part of British India since 16th century until mid 20th century. It gained its independence in 1947 along with West Pakistan and it was later renamed East Pakistan. As a result of territorial separation by 1.600 km from the West unit, the country was marginalized and eventually seceded from its union with West Pakistan in 1971 being renamed Bangladesh.

Today, Bangladesh has an estimated population of 156 million, which makes it seventh in world ranking and third among Muslim countries after Indonesia and Pakistan. Almost ninety percent of the country is Muslim. Despite its big population, Bangladesh’s land area is 144.000 sq km and it is the most densely populated country in the world regardless of very small countries and city-states. Bangladesh is located in the South Asia and bordered by India on its north, east and west, by Myanmar (Burma) to the far southeast and by Bay of Bengal to the south. Bangladesh remains a poor and inefficiently governed nation.

The picture above can be seen clearly, when you walk in the streets, where you can see hundreds of people around you working – actually striving – to earn their livelihood. Numberless people are riding three wheeled bicycles carrying two or more people exhausting themselves. Several beggars appear at every light stop in the traffic. Even one dollar suffices for one’s daily basic needs; however, it is hard to earn for many.

We stayed in Dhaka for three days during which time we had contacts with some academicians, writers and NGO leaders and exchanged ideas regarding the current situation of the country and the ways of reforming the country in terms of the NGO works and education.

We went sightseeing in Dhaka. We visited the biggest mosque in Bangladesh, Bait-ul Mukarram. I was amazed when they told me that that mosque could hold one hundred thousand people. We also visited the largest shopping centre in the country. It was merely illustrating the capitalist structure of the contemporary world obvious even in such a poor country widening the gap between rich and poor.

On the eve of the Eid-ul Adha, we got on the car along with the SAWAB staff to attend the implementation of the qurban program in a few spots out of hundreds. We headed for Dinajpur located in northwest Bangladesh. On the way, we came across people travelling on top of buses and trains from one district to another.

In Eid morning, we took wuduu (ablution) and left the hotel for Eid Prayer. This time, I was amazed at seeing about forty thousand people who gathered for eid prayer in a field. We had good moments after the prayer with local people who became so happy to see us for we were coming from Turkey.

That day, we attended Qurban implementation and meat distribution at two spots meeting with local people and enjoying the cooked qurbani meat they offered us. In one of the spots, the Land Minister of Bangladesh visited us.

On second day of the Eid, we moved to another district called Kushtia, where we carried out a similar program. Following day, we came back to Dhaka and took our flight back to our homeland, Turkey.

SAWAB is one of the council members of the Union of NGOs of the Islamic World (UNIW). It was founded in 1995 and S.M. Rasheduzzaman is the Chairman of the organization. The organization is working actively in numerous fields of humanitarian aid having over one hundred partner organizations within the country to cooperate on various events and activities. For example, SAWAB realized its Qurban project by means of cooperation with these local partner organizations. These organizations find the neediest people, many of whom eat meat once a year just in the Eid-ul Adha, in their local areas and give them tickets for them to come at the Eid day to collect their two-kilo meat package. With this system, SAWAB distributed meat to 9270 families in 40 districts, 62 sub-districts and 262 villages in entire Bangladesh. If we assume every family consisted of five people, then around 50.000 people received meat through this auspicious organization. May Allah be pleased with all the workers and administrators of this organization a thousand fold.

Because it is a poorly managed country, Bangladesh depends on NGO works and there are nearly fifty thousand NGOs in the country. Unfortunately, some of them are Christian or Jewish organizations that help poor people in order to convert them to their religions. We should not forget our brothers in other parts of the world such as Bangladesh and should do our best to give a helping hand at every occasion before others do this for their evil intentions.