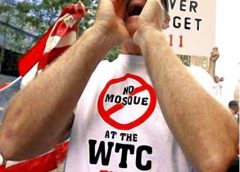 Islamophobia means an unnecessary and groundless culture of fear against Muslims and Islam. Namely, “Islamophobia term may be defined sociologically as the fear that the Western society has against Muslims”. Even though the roots of that pathology, which especially escalated after 11th of September 2001, terminologically came out in late 80s,  that fear and conflict has deep roots in the history of the West.

The confrontation of the West and Islam dates back to the emergence of Islam. In the course of time, the relationship between two civilizations which came up as conflicting with each other during peace and wars intensified in particular areas called as “frontier”. The relationships in these areas make up the foundation of perspectives that two civilizations have towards each other. Today, the Islamophobia and anti-Islamism, which are growing fast in the West, are subconsciously inherent in Westerners and along with abuse and aggression of some political, religious, radical Western groups and some Muslim groups’ murdering innocents people,  that subconscious fear comes out and become a serious threat for Muslims.

That fear which subconsciously ingrained in Westerners was formed first time in the areas in Asia Minor called as “frontier” where Muslim and European Christian armies confront during the Crusades. Then in Andalusia Umayyads, some kind of infighting took place between Christian inhabitants and Muslim administration based on phobia. With the recession and collapse of Andalusian Muslims and colonization of Muslim lands with the support of industrialization the Capitalism produced a new kind of “ biased white man”, that is, the Americans and Europeans who were othering, controlling and  externalizing the Eastern and Muslim culture and people. Especially in the second half of the twentieth century that attitude turned into some kind of a racism and xenophobia under the guise of Islamophobia with the immigration of large number of Easterners and Muslims from East countries to the West. The fact that the understanding that “although every Muslim is not a terrorist, every terrorist is a Muslim” develops in the mind of Westerners makes clear the subconscious fear of the Westerners.

During the Crusades which were formed especially with the efforts of Byzantine Empire and Roman Church using religious sentiments against the progression of Turks in purpose of taking their holy lands and al-Quds, killings of thousands of innocent Muslims shows clearly that anti-Islamism was effective in their action even at that time. It has been recorded by the historians that 70 thousand Muslims and Jews had been slain just in Quds during these campaigns.

Beginning from 711 in the first years of advent of Muslims into Spain the local authors did not have a reliable knowledge about Islam. Within the centuries, the Muslims progressed in art, architect, literature and science and made serious development in agriculture. In the travel books which had been written in those years, it was stressed that the area progressed in many fields. From 1200s, the unity in Andalusia was corrupted and during the recession years the Christian kings applied heavy taxation on the local Muslims residents in the lands that they took back in the framework of “reconquesta”. In that way, they aimed to suppress the Muslim public and force them to become Christian. Later it was targeted to forge a reaction and prejudice against Islam by compulsory assimilation and clergymen’s provocations. After collapse of Granada State the oppression on Muslim population increased. They were deported into North Africa, forced to be Christian, and their freedoms were restrained. Through these practices they tried to change and obliterate all traces of the Islamic civilization that contributed a lot to the Enlightenment of Europe. “III Philip, king of Spain, deported 300.000 Andalusian Muslims between 1610 and 1614 with a decree that he issued in 22nd of September in 1609. Nearly, 300.000 Muslims left their homeland. In that way, the traces of Muslims civilization in Spain were obliterated mostly.” It can be concluded from those events what Muslims faced was a clear anti-Islamism.

“The Orientalism”, another perspective towards East and Muslims, in a different dimension, new yet deeper and with long standing implications, a transfiguring, othering perspective which became widespread among Westerner thinkers and political figures of development period of industrial capitalism of 18th and 20th century, started to emerge.

“The liberal economists like James Mill, who had an intellectual background defending the aims of France and England to control the communities tighter in their colonies, despised the Eastern countries claiming that their civilization is static and corrupt. Even Karl Marx mentioned the changelessness of “Asian model production”. The Christian evangelists considered the traditions of the Eastern religions as superstition and they slandered them. Edward Said depicts the understanding of the orientalists as follows: “The Orient exists for the Westerner and it is produced within the relationship with the West and by the West. It is a mirror which reflects the Other which is foreign to West and inferior to West.” Since the concept of superior West or racism, which was formed by intellectual background of imperialist West in 19th century, has existed in the West that remains liberal, the Westerners easily attach the events and evil samples to the nature of the East and Islam with that prejudice. The attacks and blasts in New York and London had a substantial effect in this phenomenon. “Especially the concept of Islam, which the Muslim-origin academicians, immigrants and the ones representing Islam put forward in the West, unfortunately, feeds and empowers the Islamophobia.”

As a conclusion, through all these events what we witness as a reason of anti-Islamism is that the masses provoked by religious authorities to save their sacred values go further to commit atrocious crimes. As an Islamophobic reason, othering, transfiguring and excluding Muslims because of an orientalist perspective and categorizing each Muslim individual as a potential terrorist categorically seriously endangers the lives and future of Muslims in the West. That prejudiced and biased attitude prevents the masses from getting true information about Islam. What we offer Muslims to retaliate and respond Islamophobic and anti-Islamic actions and movements is to adopt the following approaches: “Civilized people are overcome by persuasion,” and “If we show the perfections of Islamic morality and the truths of belief through our actions, followers of other religions will certainly enter Islam in large groups, and even continents and countries of the earth will join Islam.” We should follow meticulously these two principles so that non-Muslim will have a chance to see the true Islam and get rid of this dreadful disease of phobia.

One thought on “History of Islamophobia and Anti-Islamism”