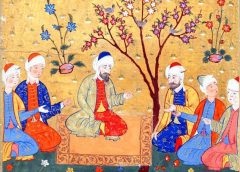 Imam Ghazali, who has been a prominent and legendary scholar champion of Islam, was born in Ghazal town of Tus city of Iran in 1058 (H. 450). His name is Muhammad bin Muhammad bin Ahmad. His identity is Abu Hamid, and his titles are Hujjat al-Islam and Zauniddin. Because of his profound knowledge he was called “Hujjat al-Islam” and “Zauniddin” which mean the evidence of Islam’s being truth.

His sincere and poor father was a devout man who earned his life by spinning wool. He used to love the scholars and frequent their seminars. He would help and serve them as best as he could do. He used to weep while listening to the advice of the scholars and he besought Allah (SWT) to grant him a son to be a scholar.

Allah (SWT) accepted his sincere wish by granting him a son, Imam Ghazali, who is one of the most distinguished figures of the Muslim World.

Imam Ghazali, who is an uwaysi disciple of Imam Ali (may Allah be pleased with him) set out his education by learning the law of Shafii School through Sheik Ahmad al-Razikani in his homeland Tus. Then, he learned knowledge from Imam Abu Nasr Ismaili in Gorgan. Afterwards, he went to Neishabour which was a science and knowledge centre of the time, and he became a student of Imam al-Haramayn Abul Maali al-Juwayni, one of the greatest scholars of that time. His master, who realised his intelligence and diligence, treated him with close interest. He studied the disciplines such as hadith methodology, Islamic law methodology, Qalam, Logic, Law and Debate there. He came to the fore in a short while among his four hundred friends and he became his famous master’s assistant.

Imam Ghazali who had an extensive and deep knowledge of Islamic sciences gave lectures according to Ash’ari School of Creed in Nizamiya Madrasa while he was still 28; and a while later he became the president of that madrasa. Administering that university Imam Ghazali taught all necessary knowledge to three hundred distinguished students. Abu Mansur Muhammad, Muhammad bin Asad al-Tusi, Abul Hasan al-Balansi and Abu Abdullah Jumard al-Hussaini are some of his famous students.

Authoring valuable books on the one hand, Imam Ghazali received a remarkable respect and love from the scholars, statesmen and public. The Caliph of his time had him write rejectionist books against Batiniyya (esotericism) movements, and this raised his fame. He was so famous that the viziers, kings and ameers envied of him; all his demands would be put in force. In spite of all his popularity, he secluded himself giving up the society to train his evil-commanding soul when he peaked in fame and glory. At that time, he left the life of academy for ten years; and he had been in Syria, Hijaz and al-Quds and devoted himself to worship. Yet, he authored some books even during that period of his life.

Imam Ghazali wrote many books through all his life. A European researcher has determined 404 books of Imam Ghazali in his book titled al-Ghazali.

One can find information on every field of religion and morality of Islam in Ghazali’s books having a style which everybody can understand. Four German professors inspected Ghazali’s books and adored the religion of Islam and became Muslim translating his books into German.

Imam Ghazali is the mujaddid of fifth century of Islamic calendar. There was a chaos in political and intellectual life of Muslim countries during his lifetime. Because of that political chaos and leadership vacuum, the unity of creed among the Muslims had been devastated and some divisions had occurred in thought and belief.

For example at that time, the ancient Greek Philosophy had begun to affect most of the Muslim world, and every smart and curious young Muslim begun to have a respect and adoration to Greek philosophy. Most of the books related to ancient Greek philosophy, especially the books of Aristotle, were translated from Syriac, Greek and Persian into Arabic.

In addition, a clandestine organization named Ihkwan al Safa (Brethren of Purity), which made the Greek philosophy its basic, had been formed in Baghdad. That organization argued the following idea: “The Islamic law has been marred by ignorance and perversion. There is no way other than to restore it with philosophy.”

On the other hand, the Muslim scholars such as Ya’qub Kindi (Alkindus), Farabi (Alpharabius) and Ibn Sina (Avicenna) advocated the Greek philosophy and canonized Aristotle. Bediuzzaman mentions about these philosophers in the thirtieth word as follows: “Since some geniuses of Muslim scholars such as Ibn Sina and Farabi were captivated by the splendid image of philosophy and deceived by its attraction and put their enthusiasm into philosophy, they barely got the rank of just an ordinary believer. A great scholar Imam Ghazali, who is the Hujjat (evidence) of the Islam, did not see them fit to that rank.

Their un-Islamic thoughts which put them such a lower ranking were as follows:

They rejected the bodily resurrection; enjoying the pleasures of the paradise materially; feeling the torture in the hell materially, and the description of the hell and heaven as in the Qur’an. Besides, they considered the material as pre-eternal (without beginning) and attached power and creativity to the causes. They defended that it is possible to reach real truth and the wisdom of Wajib al Wujud (existence by essence) just by reason and thought. According to them everything is understood by the principle of pure reason, and everything is dealt with by pure logic. Anything which is unfit to the principles of pure reason is unacceptable.

A new sedition had emerged with effect of philosophy. That sedition was Batiniya (Esotericism), which interprets the verses of the Qur’an in a distorted way, and it was more dangerous than philosophy.

An authority that is a mujaddid, who knew the religious and empirical sciences well; and understood the subtlest points of these sciences, was needed to eliminate the destructive effects of philosophy and Esotericism on Islam.

Allah (SWT) sent Imam Ghazali as a mujaddid because of His compassion to help Muslims and to disperse the darkness of that time. Imam Ghazali prevented all invalid dangerous thoughts, philosophy being in the first place, from spreading all around the Muslim World and blocked all beliefs and thoughts which are against the Qur’an with thousands of books that he wrote and thousands of students that he trained.

He inspected four important movements of Islamic World at that time thoroughly; the Kalam scholars, al Batiniya (the esotericism), the philosophers, and the Sufis. Concluding that the scholars of Kalam were shallow and insufficient, and al Batiniya went astray, and the philosophers’ thought was against Islamic law in many religious issues, he fought against them intellectually during his life. Yet, he declared that Sufism was true, and he appreciated the followers of Sufism and pledged allegiance to Abu Ali Farmadi (may Allah be pleased with him), the Qutb of the chain of greats.

Spending his fifty-year life efficiently, Imam Ghazali refreshed his ablution and prayed on the morning of the night of Jamazial Awwal 14th, 1111, on Monday. Then he demanded a shroud from his relatives. He kissed the shroud and put it on his hand and said: “O my lord, my Owner! Your order is more than welcome for me.” He went into his room. He stayed more than usual and did not come out. Upon this, when people went into the room, they saw that Imam Ghazali put on the shroud and turned his face towards qibla and passed away.

4 thoughts on “Hujjat al-Islam Imam Ghazali: The Sun of the Fifth Century”