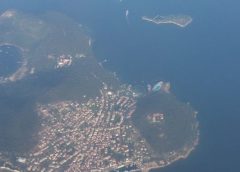 Man was first in Paradise. But when Adam (peace be upon him) was expelled from it, his children had to live in the world, which brought two crucial consequences: eternal bliss or eternal misery.

Why is that man had to come to the world, take the test of this life and in the end goes to Paradise or Hell? Is not it something bad that many people go to Hell? Everyone could enjoy the life in Paradise and nobody would have to go to fire if Adam (PUH) was not expelled from Paradise. What is the wisdom behind this?
First of all, man is a vicegerent on earth. He is mentioned as khalifa in the following verse: Behold, your Lord said to the angels: “I will create a vicegerent on earth.” They said: “Will You place therein one who will make mischief therein and shed blood, while we do celebrate Your praises and glorify Your holy Name?” He said: “I know what you know not.” (Baqara 2:30)

And the wisdom is entrusting man with a duty, which is basically to remember, to contemplate, and to thank; in other words, to worship Allah SWT. “I have only created jinns and humans that they may worship me.” (Dhariyat 51:56)

Divine Names require a mirror on which the divine attributes of the Creator are manifested. This mirror must have a comprehensive nature, endless potentialities, and capacity for spiritual progress. Man’s nature, unlike other living creatures, is a comprehensive mirror to all the Divine Names, which appear on the body, spirit, soul, mind, heart, and many emotions. That is why man was created having the potential to unfold spiritual progress, to reveal the potential to be the most comprehensive mirror to all the Divine Names.

If man had remained in Paradise, his rank would have been fixed like that of the angels. His potentialities would not have unfolded. The angels, who perform many sorts of worships, are numerous, and there is no need for man to perform those worships of angels. In other words, it would be unwise if man had stayed in Paradise and had a fixed rank. What is more, the creation of him would be even unnecessary.

Angels do not commit sin. They cannot progress or decline. On the other hand, man has a free will which is a great advantage. Unlike other creatures man can choose the right or the wrong. He has an evil commanding soul as well. So, he struggles against the challenges during his life. And this is the way to be a mirror to the Divine Names.

There are infinite degrees of progress and decline for man with his free-will from the Nimrod’s and Pharaoh’s as far as the truthful saints and prophets. This, however, is not possible in Paradise. So Divine wisdom required a world of responsibility where man would move through infinite degrees, which is appropriate to his potentialities. For this reason he was expelled from Paradise and sent to the World. That is to say, it was pure wisdom that Adam (PUH) was expelled from Paradise.

Man is responsible of his actions. Progress makes him a beloved servant. Decline causes man to go to Hell. These two are the result of man’s own free-will. Although nobody would say he chose to be sent to Hell, and some may even deny that they have the will of choice, we know that this is not true. Anyone can feel in himself that he has free-will. It is so obvious that it can even be observed people buy better things for themselves while they do shopping. Free-will is a simple but an undeniable truth.

Man goes to Hell as a result of his deeds. He could choose to be an obedient servant of the Creator or deny that and spend his life as he wishes, which results in a misery at the end. So it is just and right that the sinners and the unbelievers go to Hell. However, we know that Allah SWT bestow us the Paradise even we are among those who have good deeds. This is from his mercy. And we also know that He may forgive the sins of those wrongdoers and send them to Paradise. But the unbelievers are not to be forgiven and they are sent to Hell forever.

Although this seems to be very harsh, “this is pure right and justice,” Imam Bediuzzaman says, “for an infinite crime demands infinite punishment.” Unbelievers only commit one sin, which is denying the existence of the Creator, in a short life. But within this sin there is infinite wrongdoing. Unbelief is an insult to the entire universe, first of all. It also reduces the value of all beings which are the obedient servants of a Magnificent Ruler. Although all creatures testify that there is a Creator and He is the One, unbeliever denies this. “Therefore, in order to avenge the rights of beings on the unbeliever, the beings’ monarch, the All-Compelling One of Glory, casts the unbelievers into Hell,” Imam Bediuzzaman concludes in his treatise named The Letters.