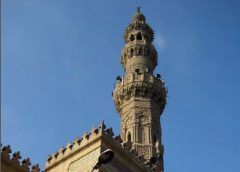 A short life story of Imam Shafii, the scholar who ‘filled the earth with knowledge’

Imam Shafii, born in Gaza, Palestine, in 150 AH/ 760 AD was the imam and founder of the Shafii School of Islamic law, one of the four schools of Islamic law of Ahl Al Sunnah wal Jama’ah, which is the great path of the Qur’an, and he was the mujaddid of the second century. The year that he was born was also the year in which Imam Al-A’zam Abu Hanifa passed away. His given name was Muhammad Bin Idris and he was known as Abu Abdullah. Through both his parents, his descent intersects with that of the Prophet at Abdi Manaf. Imam Shafii was known by the name Shafii which is a reference to one of his ancestors, Shafi’ al Saib.

Imam Shafii lost his father while he was still a little boy. His poor mother took him to Mecca, their original hometown, and she raised him there, overcoming difficult conditions without anyone to protect her.

Imam Shafii began his academic life while he was very young, and he frequented the lectures of the famous scholars of that time. He learned hadith and Islamic law from Sufyan ibn Uyayna who had memorized the Qur’an by the age of four, and he discoursed on Islamic law when he was ten.

Imam Shafii memorized the Qur’an by the age of seven and Al Muwatta of Imam Malik by the age of ten. When he was fifteen he was considered competent to give opinions on Islamic jurisprudence.

Imam Shafii, who said, “I guarantee the livelihood of sincere students of the Islamic disciplines (on behalf of Allah)”, tells of the first days of his academic life as follows: “After I memorized the Qur’an, I used to go to Masjid Al Haram (the Ka’bah) to benefit from scholars of hadith and Islamic law. Yet, we were very poor and I was not able to buy a single sheet of paper, thus I could not write down the lectures that I learned.”

After the first few years of his education in Mecca, he went to the desert to live together with the Huzail tribe to learn eloquence and the subtle points of the Arabic language. He learned to use a bow

and arrow along with the finer points of language during that ten year period of desert life. He relates as follows: “I went out of Mecca to the desert to learn the life-style and language of the Huzail tribe. That tribe was the best of the Arabs in terms of the Arabic language. I travelled with them and learned how to use a bow and arrow. When I returned to Mecca, I had learned a lot about both tradition and literature”.

The most significant era in the academic life of Imam Shafii began with his being a student of Imam Malik, the imam of the Maliki school of Ahl Al Sunnah and a great mujtahid. When he first went to Imam Malik, he was twenty years old, and he studied with Malik for nine years.

When Imam Malik passed away, Imam Shafii thought that he had enough knowledge and now it was time to find a job, since he had lived as a poor student until that time. Mus’ab b. Abdillah Al-Qurayshi, a judge in Yemen, who happened to be in Mecca at that time, took him to Yemen to find him some employment.

During his time in an official post there, a brutal governor was appointed to Yemen. When the governor began to oppress those under his reign, Imam Shafii attempted to warn him. But this stance of Shafii’s caused the governor to turn against him. The governor bore a grudge against him and fabricated slanders that he was propagating the ideas of the Shiites. He sent letters to the Caliph Harun Rashid to provoke him to take action against Imam Shafii. Harun Rashid was afraid of a Shiite insurgency. Thus Imam Shafii was handcuffed and taken to Madina before the caliph. When it was understood that he was innocent, the caliph freed him and supported him financially.

After this incident, Imam Shafii turned towards academic life again, giving up the official business in Yemen. He went to Baghdad in 183AH and began to take lessons with Imam Muhammad, who was Imam Al-A’zam’s student and also Imam Shafii’s stepfather. Imam Muhammad took him under his protection and taught him his books. In this way, he provided him with knowledge of the traditions of Islamic law in Iraq. Imam Shafii had tremendous benefit from both Imam Muhammad’s books and his knowledge.

He states this reality in the following way: “I wrote a lot of books with the knowledge that I learned from Imam Muhammad. If it were not for him, I would still be at the threshold of the door of knowledge. All people are the children of the scholars of Iraq with regard to knowledge, and the Iraqi scholars are children of the scholars of Kufa, who are Abu Hanifa’s children. Just as a father earns money and feeds his children, and provides them with a good future, Abu Hanifa has fed the people coming after him with knowledge.”

Imam Shafii learned from famous scholars such as Imam Malik, Imam Muhammad, Sufyan b. Uyayna, Fudail b. Iyadh and Muslim b. Khalid Zendjy and he gained a much higher competence than other scholars of his time. When he was thirteen, he announced to the scholars in the Haram Al-Sharif, “Ask me whatever you want”. He issued opinions on religious issues when he was fifteen. Ahmad b. Hanbal, the founder of the Hanbali School and memorizer of one million hadithes came to learn from Imam Shafii. Many people asked him: “Why are you kneeling down before him, since you are also a great scholar?” He answered: “He knows the meaning of what I memorized. If it were not for him, I would stay at the threshold of knowledge. He is a sun that has illuminated the world, and he is nourishment for the hearts.”

Ahmad b. Hanbal also said of him: “He was the most competent in interpreting the Book of Allah and His messenger’s Sunnah”; and “There is nobody who has written anything without benefitting from Imam Shafii”.

Imam Shafii who was referred to by the hadith, “Do not swear on Quraysh, because a man from Quraysh will spread the knowledge to all of the earth”, earned a high level in spiritual ranks, as well as being an outstanding scholar. To support this point, a man called Abdullah Ansari said the following: “I love Imam Shafii very much, because I see him as being before everybody else in spiritual ranks.”

Imam Shafii travelled for years between the Hejaz and Baghdad, and he learned from the great scholars of his time. Then employing his acute mind, he created a new school of Islamic law, incorporating the laws of both the Hejaz and Iraq. Thus, he showed the Muslims a new method to implement in their prayers and their transactions. The method which the Imam established based on Sharia principles using his methodology is called the Shafii School. Those Ahl Al Sunnah Muslims who follow the teachings of that school in their day to day lives are called Shafiis.

The great Imam left behind hundreds of students and valuable books. He died in 204AH (820 CE) in Egypt due to an illness. His death was a great loss to all the Muslims and it was met with sorrow and tears. When his grave was being dug a beautiful smell spread all around affecting those attending. He was buried in Qurafa cemetery on the outskirts of Al-Muqattam Mountain in Cairo. Salah Al-Din Ayyubi built a madrasa and a shrine on the site of his tomb. Salah Al-Din’s brother Afdal built a mausoleum for him in 1211 after the defeat of the Fatimids.