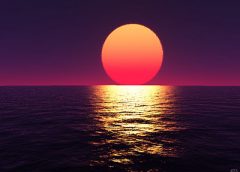 The history has many interesting subject, characters, events ex… Although the writing invented around 3500 BC, “the established, known history of humanity stretches back approximately four thousand years. This deficient, short view of history cannot give accurate knowledge about the times before the Prophet Abraham, upon him be peace. It either gives superstitious information, or denies some facts, or can provide only very brief knowledge.”[1] Because of lack of enough information.”

According to verses in the Qur’an, Dhul-Qarnayn was a monotheist, believed in one god and he was inviting people to the monotheistic religion, and he judged people by the religion’s rules we can understand these from the following verses from Qur’an;

“18:86- Till, when he (Dhu’l-Qarneyn) reached the setting-place of the sun, he found it setting in a muddy spring, and found a people thereabout. We said: “O Dhu’l-Qarneyn! Either punish or show them kindness.”

18:87- He said: “As for him who doeth wrong, we shall punish him, and then he will be brought back unto his Lord, Who will punish him with awful punishment!”

18:88- “But as for him who believeth and doeth right, good will be his reward, and we shall speak unto him a mild command.”[2]

“According to verifying scholars, the very name of Dhul-Qarnayn, which has the affix Dhu, meaning having or possessing, shows that he was not Alexander the Great. Such titles were used by the kings of Yemen, so he might have been one of the kings of Yemen who lived at the time of Prophet Abraham, and who was taught by Khadr.[3] Alexander the Macedonian, however, lived approximately three centuries before Christ, and was taught by Aristotle.”[4]

“The reason Dhul-Qarnayn became known from early times in Qur’anic commentaries by the name of Alexander was either because he was also known as Alexander, so he was the Alexander of ancient times, or because the particular events mentioned in the Qur’an are the tips of universal facts, and several powerful kings and conquerors lived who were like Alexander the Macedonian and who acted like Dhul-Qarnayn.”[5]

Before indicating another difference between them, I want to explain one of the special futures of Qur’an. That is consideration of common people and usages of metaphors, similes, allegories, and parables to tell the subjects, and truths understandably in their eyes. In deed the majority of the society is consist of ordinary people.

Therefore Nursi expounded the verse 18:86[6] in a very clearly way by explaining the feature. In wives of the verse Dhul-Qarnayn’s travel first trough the vest, “he reached the setting-place of the sun; he found it setting in a muddy spring.”[7] Spectacularly some who misunderstood it or willfully misleading people by giving it wrong explanations. Since “Over time and misunderstanding, many similes and parables have assumed the form of physical facts.”[8] By expressing that Dhul-Qarnayn saw the sun setting in the shores of the Atlantic Ocean, which appeared as if it were a boiling, muddy spring from where he was standing, or he saw it setting in the fiery, smoking crater of a volcano. That is to say, Dhul-Qarnayn advanced to such a point from where he saw a swamp along the shore of the Atlantic Ocean aphorizing in the intense heat of summer, and he witnessed the apparent setting of the sun in the ocean, which seemed to him to be a large pool behind that swamp. Or he saw the sun, the eye of the sky, hiding in a new, fiery crater at the peak of a volcano, which was spewing out rocks, earth, and lava. With this sentence, the miraculously eloquent expression of the wise Qur’an teaches us many matters. First of all, it tells us that Dhul-Qarnayn advanced in northern Africa towards the Atlantic Ocean during an extremely hot summer and then he saw that the ocean was like a boiling pool. During his advance, he also witnessed the eruption of a volcano. It is well known that the sun’s movement is apparent and indicates the movement of the earth. So its setting is also apparent but this is not what the verse above is speaking of. The word spring is a metaphor. A vast sea appears like a small pool from afar. A sea which appears beyond swamps and from which mist and vapours rise because of the heat can be likened to a hot, muddy spring. The use of ‘any for the spring, which in Arabic also means the sun or an eye, is highly meaningful and apt regarding eloquence.50 This is the description of what appeared to the eyes of Dhul-Qarnayn from afar, and it is fitting for the grandeur and exaltedness of the heavenly address of the Qur’an, which comes from the Supreme Divine Throne and commands the heavenly bodies, that it states that the subjugated sun, which performs the duty of a lamp in the guesthouse of the All-Merciful One, is hidden in a spring of the Lord like the Atlantic Ocean. With its miraculous style, the Qur’an presents the sea as a hot spring and a steaming eye. And that is how the sea appears to heavenly eyes. In short, Dhul-Qarnayn saw the vast Atlantic Ocean as a muddy spring from afar. However, the Qur’an’s eyes are very close to everything and, therefore, do not see it as Dhul-Qarnayn saw it, which was affected by the distance. While it tells us how the ocean appeared to the eyes of Dhul-Qarnayn, the Qur’an also suggests that it belongs to, and has come from, the “heavens,” and this is why it sees the earth sometimes as a palace, sometimes as a cradle, and sometimes as a page. Thus, calling the vast, vaporizing Atlantic Ocean a spring shows the grandeur and exaltedness of the Qur’an.”[9]

The explanations certainly shows that the story of Dhul-Qarnayn was not telling about Alexander the Great however there are some other kings who acted like Dhul-Qarnayn and Alexander was one of them. The clear statements on the name of Dhul-Qarnayn, his region, his period, his first travel to the west and the place that he arrived are the clear evidences of difference.

One thought on “Dhul-Qarnayn”