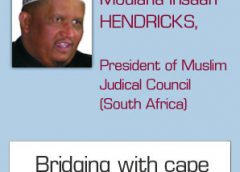 Muslim Judicial Council (S.A.) is one of the most representative and influential non-profit organizations (NPO) or faith-based organizations (FBO).  MJC strives to promote and protect the value systems of Islam and to give guidance to the community, based on the Shari’ah of Islam in accordance with the Holy Quran, Sunnah, Ijmaa’ and Qiyaas, and with due reference to the Four Schools of Jurisprudence which are recognized by the Ahli Sunnah Wal Jama’ah. Striving for the unity of all Muslims being one of its aims, The Muslim Judicial Council (S.A.) [MJC] is a Muslim Judiciary whose main functions relate to religious guidance, spiritual and moral rejuvenation, education, Fatawa (Religious Decrees), Da’wah (Islamic Outreach), Halaal Dietary Provisions and Certifier.

1. How and when did Islam get in South Africa?

According to records Islam reached South Africa in 1652. But historical records show that only a few Muslims came in 1652. Since they were slaves they did not find much opportunity to really move. But in 1659 approximately seven years after that date more Muslims arrived. But the correct date is 1952 regarding the arrival of first Muslims to Cape Town, the South Africa.

2. What is the rate of Muslim population in all South Africa?

The rate of Muslim population remains small minority. You may wonder why Muslim community did not grow much for three hundred years. That was precisely to do with the Apartheid system that segregated the people and never allowed the various races to mix in South Africa. Because of that fact the activities even for Da’wa was limited. But in some areas the Muslims did grow. For example in Cape Town more than fifty per cent of Muslim community takes back the origin to Christian families. So the growth is not at the level that we expect it to have been for three hundred years for political reasons which I have just indicated. Now there are good signs in new democracy particularly among the indigenous black people in South Africa even among the white people there are increasing numbers of people who choose Islam. And of course, last a few years some international events, whether 9/11 or Danish cartoons, had negative effects on Islam. Yet of course even in this process some people searched about Islam because of curiosity.

3. What about the ethnic origins of Muslims living in South Africa.

4. Are there Muslims among white population of South Africa?

Yes there are. But they are in very, very minority.

5. What about the political and economical situation of Muslim community? Are they efficient?

Politically and economically the Muslim community plays a very effective role in South Africa. Many Muslims were prominently in the struggle for freedom and liberation. Therefore, after emergence of democracy the Muslims were rewarded with positions because of their contribution to that struggle and that is also because Muslims are very much integrated into general public and they are indigenous in South African society and therefore with the formation of our democracy and our freedom and our institutions and constitution Muslims benefit and took up roles as South Africans.

6. I think that there is not totally Islamic party in South Africa.

No. With the emergence of our democracy there have been attempts to establish some and they did manage to establish one or two African Muslim parties. Then there was Islamic Party (IP). And recently in our presidential elections 2008 there was a party known al Jama’a. I must honestly admit that the establishment of Muslim party in South Africa did not really make an impact. There are various reasons for that. I am not against the establishment of an Islamic party but I think that it is a program that we need to work very hard because I believe an Islamic party with Islamic values can offer a lot to South African society. Perhaps the South Africa should study the examples of the other countries like Malaysia with very successful Islamic parties. From the political perspective the Muslim community is still fairly much better in the ruling party South Africa and South Africa National Congress. Therefore there has always been that unwritten policy in Muslim community that it is best for Muslims to put the vote to political parties that come out of the historical liberation struggle for freedom in South Africa and therefore the Africa National Congress and the PAC (Pan-African Congress) and these liberation movements we looked upon as the political parties that can be trusted you know by the Muslim community and by other communities.

7. How is the situation of Muslim scholars and intellectuals in South Africa. Are they traditional scholars or western type intellectuals and what is their effect on community?

As far as the traditional Muslim scholars are concerned they enjoyed a space in South Africa through three hundred years history. It goes back to arrival of early Muslim scholars such as Twang Yusuf and Twang Gouru who arrived in 1700s. There has been a steady growth in that particular regard the Muslim traditional Imam and so on. We should mention about the early arrival of great scholar Abu Bakir Efendi who cannot be excluded from the list of the Muslim scholars who existed in South Africa. In last a few years we have seen a good growth in number of Muslim academics in South Africa. But still I think we can do much better because it is an area that requires good attention from Muslim society.

8. How do Muslims educate their children and transfer Muslim culture to next generation?

9. Do South African Muslims have relationships with the other Muslims all around the world and are they integrated with them?

Of course what has been happening over the years of the apartheid regime Muslims were very much secluded from the world because the apartheid regime did not allow much interaction between not only Muslims and other Muslims because of apartheid regime many people preferred not to come South Africa. The only contact of South African Muslims with outside world was the opportunity for Hajj. But again over the last fifteen years there has been emergence of international relations with other communities whether it be from the Middle East whether it be from Far East whether it be from some of the African countries exchange of visits through business interests through educational interests people have come. For the last few years we have been interacting the other countries such as Turkey, Saudi Arabia because of international conferences. I think in the last fifteen years there have been good opportunities like we visited Politics Foundation tonight. It was good indication of what we, both sides can do in the future. Coming to Turkey and seeing and learning the experience of Turkish brothers was good and you can come to South Africa and see and learn, as well.