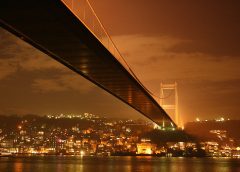 Dreams that are not for nothing…

There was a man, a man who loves Allah and whom Allah loves…

A man that was

A man who struggled along with hardships and made his ways through all the difficulties and He succeeded it and brought victory and fulfilled his duty.

When he was 12 he read the hadith:

“Verily you shall conquer Constantinople. What a wonderful leader will he be, and what a wonderful army will that army be!” (Ahmad) and he wanted to be that person. He had the opportunity and the skill. He persisted and Allah gave him success. He persisted in this even though there are so many obstacles. Even his contemporaries and best friends opposed him. He said: “Nothing is impossible before Allah and the time will come for us, Allah is Just.” He struggled along the difficulties. No success is attained with your hands in your pockets. He knew that, he was determined and that’s why he was patient and progressed through the hardships.

He became Sultan, (Mehmed II) at the age of 19 and when he was 21 he managed what he intended to accomplish. After many trials by previous Muslim leaders and Ottoman Sultans, Fatih Sultan Muhammad conquered Constantinople in 1453 by a wise and successful preparation and changed its name to Islambul.

He completed the conquest of the Byzantine Empire by successfully storming (1453) Constantinople after a 50-day siege, for which he constructed the largest cannons the world had yet known. They said: “Siege of Constantinople is hard.” He said: “We will try and see.” They said: “You need explosives.” He said: “Who says we don’t have any, we will produce our own.” They said “it is impossible to conquer Constantinople.” He said “Nothing is impossible before Allah, if our Prophet gave the glad tidings of the conquest, then it is Allah’s will.” This reference is made to the prospective conquest of Constantinople in this authentic hadith: “Verily you shall conquer Constantinople. What a wonderful leader will he be, and what a wonderful army will that army be!”

Yes, he conquered Constantinople and changed its name into Islambul which is changed to Istanbul later. What he accomplished in 1453 by conquering Constantinople was with the knowledge and wisdom he enquired and taught by Allah, he knew that. That’s why he respected all the history that was recorded during the Byzantine time and never touched the existing churches and religion and history of the people there. He was a genius of his time and he was considering “knowledge, information, wisdom” at the highest importance.

I have a sneaking suspicion that how different might be the concept of “information” according to Muhammad al-Fatih if he were to live this day. Probably, it will be way too much different from what today’s popular post-modernist pop cultural youth consider it to be. I don’t want to be assertive or critical but we must consider a fact that we, as the new young generation, don’t consider information of the importance. What I mean is the more desperately we are in need of true information the more we drift apart from it by some distractions. While we think we are getting equipped with information, the information takes us hostage. We become slaves of the information pollution. To make a self-criticism, all today’s pop cultural youth knows about “information” is name of some rockers, bands, their albums, series on TV, paparazzi programmes etc. It will be so unjust to generalize but as witnessed today does our youth carry the same or even the familiar qualifications needed to open a new era? Let alone opening a new era, are we ready to open the cover of a book to read or all we do is wasting our precious time surfing on the internet in some friendship sites? Let’s leave this aside and let’s see it on the other side.

On the other side of the coin, there is a generation which is fully loaded with the quality and true information and reads a lot in spite of the distractions of our time. There is a determined, steadfast, hard-working generation which takes time on studying on the true information and not wasting even a second on unnecessary pursuit of information or what is called “paparazzi”. It takes courage to be like Muhammad al-Fatih. He had so many opposition and hardships but he never surrendered. He had the opposition of even his close friends and famous scholars of his time. But he didn’t give in and kept on trying and working hard for his mission. Yes, it takes courage to be like him. But we are ready to give whatever it takes to serve for our mission. We will give whatever it takes to conquer… We will give whatever it takes to conquer hearts, minds and souls. He was brilliant and courageous, so we are. He was humble and sincere, so we will try to be. He was a man of Justice, sacrificed his life trying to spread justice, so we will sacrifice anything even ourselves to spread justice. He lived about forty-nine years and in every breath of his life, he had only one thought “to please his Lord and see him in Jannah.” In his book there was no place for despair. In his there was no place for sadness. In his book there was no problem that doesn’t have any solution. And he said his opponents “Our hands reach where their dreams cannot even imagine.” In his book there was no place for despair for he knew the ayah: “…..Despair not of the mercy of Allah…” (Surah Zumar, 53) Because he knew “if there is despair, there is no success and forgiveness.”

O youth! Find the despair and kill it no matter what happens. Find your mission which is spreading the word of Allah and run in the way of it as long as Allah allows you, for Allah bestowed you this “youthfulness” as a blessing. So evaluate it by adorning it with the most virtuous manners. You will have opponents, no matter what carry on your duty and go on your service. Trust the One who created you in the first place and sent you in this world.And never despair for despair kills the delicate senses.

O Allah! Forgive us, conceal our mistakes and honor us with the best manner you consent.