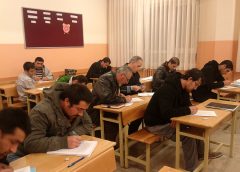 Language, which is the most important means of people’s communicating with each other, is the common treasury of national memory, national emotions and thoughts, all material and moral values, the appearance of the world of thought and the cornerstone of culture. Communication of “the common emotions and thoughts of a nation’s individuals” is done through language. When the subject is culture, the first thing that comes to mind is language. For this reason, language is also a cultural transmitter and transporter. The history, geography, values, knowledge, folklore, literature, music, and every kind of common values are filtered through of centuries, symbolized with the words, poured into the treasury of language, and are kept there. Individuals, apart from learning the mother tongue of the society they live in today, should also retain the language that is characterized by their past culture. This is because the language is the spirit, essence and memory of a nation. To have this background adds a unique value to the individuals who maintain the language of their culture. Moreover, to keep this spirit alive, to protect the national memory must be the primary duty of the individuals of that nation. For this reason, learning Ottoman Turkish gains importance – it is actually essential – in order not to be alienated from our cultural values; not to cut our ties with our history.

It is apparent that as a Turkish nation we are attached to our cultural values and sensitive about the matter of being national. From this aspect, Ottoman Turkish, which the Turkish people developed as a unique language for centuries, is of vital importance to understand the cultural heritage, to transmit it to future generations and to make it live. Ottoman Turkish, which we can also call “Ottoman Period Turkish,” is the Turkish language written with the Arabic alphabet during the period of Ottoman Empire which ruled the world for seven centuries with its lands on three continents. It is not a foreign language of the past. It has a key position in the healthy development of historical thought, culture and the civilization of the generations of today and the future.

It is not an exaggeration to say that to build a strong bridge between the past and future and look confidently to the future is possible by reading and understanding Ottoman Turkish. Are not nearly all of the countless, distinguished works which our ancestors gave us as gifts taken from the honourable, glorious history of a thousand years which formed the bases of our national culture, written in Ottoman Turkish?

“Nothing is respected more than the state among the people,

There is no state [happiness] as a breath of health in the world.”

Written by the Sultan of World, Kanuni Sultan Suleyman, with the pseudonym ‘Muhibbi,’ you need to know Ottoman Turkish to really understand and interpret this couplet which refers to “(the) state” as important for the people as the breathing in of our life. Moreover, to be able to build the future you need to be able to understand the past and explain it. To learn Ottoman Turkish is important to understand the profound content of the works written in the Ottoman Period. It is the key to our thousands of years old past, ancient civilization and great, cultural heritage.

I believe that as the cultural inheritors of a glorious thousands-years-old history our kids’ and youth’s ability to read and understand a book or a document from their ancestors, an inscription on a historical water fountain, a prayer written on a mosque dome or a text on a historical building, will contribute to their knowing the world of knowledge and thought of the past, to their feeling the pleasure of profoundness and aesthetic, to transmitting the religious and national values to future generations, and sustaining and protecting those values.

There are also educational activities of NGOs in respect to Ottoman Turkish, either with the permission of the Ministry of National Education or with cooperation protocols. For instance, with the protocol signed between the Ministry of National Education and Hayrat Foundation in 2012, there has been great interest and attendance to the Ottoman Turkish courses opened across Turkey. This situation is pleasing. In 2015, for example, 6.466 classes were opened and 175.743 students took education. Our citizens show great interest and attend these courses which are opened among the programs of non-formal educational activities.

As education institutions and educators, we have a historical responsibility for this matter which will be a benefit for the future of our children and our country. Our efforts will increase in order to popularize and ensure continuity of this course by developing the current programs which have been started to learn and teach Ottoman Turkish, a bridge to meet our one-thousand-year-old past, for a generation who will know and understand its history, internalize its culture, be equipped with national and spiritual values and build its future with hope.

Will Ottoman Turkish be a common course one day? Why not? We will continue to inform, tell, and teach until it is.