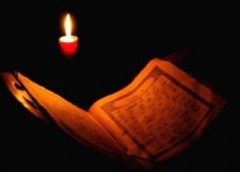 The notion of unseen is considered as a fundamental subject in Islam. All six pillars of faith (iman) are mainly based on this fact. There are numerous verses in the Holy Qur’an mentioning about the belief in the unseen (ghaib) such as ”Those who believe in the Unseen, establish prayer, and spend out of what We have provided for them. (Surah al-Baqarah, 2:3).

On the other hand, positive science and some philosophical views consider religions as dogmatic belief systems. They claim that there is no way one can find a logical proof for the existence of a supernatural being. According to them, something can only be considered existing only if we perceive it through our five senses.

However, as believers we do not base our argument on our dogmatic believes. Well, we believe in the existence of a creator through his revealed scripts and his messengers, but we also discuss and prove the existence of this unseen Creator. We do not act like “Well, presently we are unable to prove that there is a God, but we still believe in that.”

There are numberless proofs for the existence of the unseen, that’s all pillars of faith. Yet, those whose minds are constrained in their eyes cannot comprehend this fact. Some of the innumerable logical proofs are as follows:

As a matter of fact, we don’t necessarily perceive the existence of everything through our five senses. For example, we cannot show our mind contained in our brain. After all, animals also have brains but they don’t have mind. But we are aware of our mind through our actions.

In the same way, we understand the existence of a supernatural creator by means of the characteristics of the created beings. One of the numberless signs of the supernatural creator is that the whole universe is in order. Imagine that one galaxy crashes with another one. That would be the end of the universe. But since the beginning of the existence of the universe there has been a great order and harmony in the universe among all creatures from micro to macro cosmos.

So, this huge and comprehensive order in the universe can also be likened to a factory, where numberless machines are working in a systematic and productive way thereby producing the desired products.

We all know that there is no factory on earth which comes into existence and operates without any engineer and an owner. Although we may not see the engineer or the owner of the factory present in the factory during its operation, it doesn’t indicate the engineer/owner’s inexistence.

Through this logical analogy it becomes evident that the whole universe was created and is being operated by one ‘engineer’ and ‘owner’. The fact that we don’t see its creator and owner cannot be a reason for the inexistense of the creator and owner of this colossal universe, and there are numberless signs proving the existence of Allah (swt).

Absence of sight does not attest to the absence of existence. Failure to see can in no way be a proof for inexistence. (Risale-i Nur Collection, Words, 29th Word)

One thought on “Belief in the Unseen”