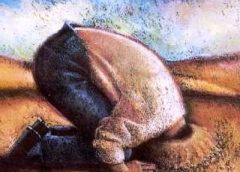 The first step through the weakness, division and disagreement is “Restricting endeavour to what is personally beneficial.” When this self centred character and illness spread throughout in a society, then it gradually destroy the unity and division spreads. The rivalry in material benefits, flattering the ego and giving a lofty position to the evil-commanding soul by pursuing public attention and acceptance in the name of fame, renown, or status in people’s, fear which is a most basic human emotion, are  some of the causes of this illness.

The greatest cure for the self-centred and egoist characters is Muslims model society. The companions of the prophet (pbuh) regarded their friend as superior. Qur’an mentioned their behaviours to their brothers as fallows, “And those who before them, had homes (in Medina) and had adopted the Faith- show their affection to such as came to them for refuge, and entertain no desire in their hearts for things given to the (latter), but give them preference over themselves even though poverty was their (own lot). And those saved from the covetousness of their own souls, they are the ones that achieve prosperity.”[1]

It is sad that we have lost our most valuable possessions, our elevated morals, fine character and the generosity to others especially to our Muslim brothers and sisters. Instead of high morals of Islam, we have taken self-centred; dissipate morals and characters from West. Because of the obscene and bad character that infiltrated us from foreigners, a selfish man from among us says: ‘If I die of thirst, let it not rain again anywhere in the world. If I do not experience happiness, let the world go to rack and ruin as it wishes.’ These ridiculous words arise from lack of religion and from not recognizing the hereafter.

If a person’s endeavour is his nation, that person forms a miniature nation on his own. Because of the heedlessness of some of us and the foreigners’ damaging characteristics that we have acquired, and, despite our strong and sacred Islamic nationhood, through everyone and considering personal benefits and not the nation’s benefits, a thousand men have become like one man. If a man’s endeavour is limited to himself, he is not a human being, for human beings are by nature civilized. Man is compelled to consider his fellow humans. His personal life continues through social life.

Indeed, “Islamic society, at this time, is in the form of a factory containing many machines. Should any components of the machines fall behind or encroach on another, which is its fellow, the machines cease to function. The exact time for Islamic unity is therefore beginning.” [2] It necessitates not to Restricting endeavour to what is personally beneficial.

All in all, one of the most effective ways to achieve the Islamic union and get rid of this illness is sincerity which means to pursue God’s good pleasure in someone’s actions. “Therefore, we need and are compelled to realize true solidarity and unity, which can only be attained through sincerity and which can gain for four people the power of one thousand one hundred and eleven. If three 1’s do not unite or come together, they will have only the value of 3. But if they unite or come together, they will gain the value of 111. History records numerous events which bear witness to the fact that 16 self-sacrificing people in true brotherhood have obtained the moral strength of more than 4000 people. This is because each individual in a true, sincere union can also see with the eyes of the others, and hear with their ears. It is as if each of the ten persons in true solidarity and unity has the value and power of seeing with twenty eyes, thinking with ten intellects, hearing with twenty ears, and working with twenty hands.”[3]