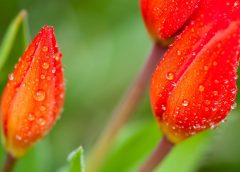 We have lived the lengthy and gloomy days of cold winter season for a long time. Dark clouds, rains, long nights and storms have seemed that it will never come to an end. The delicate flowers have faded away leaving behind tearful eyes. The strong huge trees have lost their strength. Songs of little birds we were so used to hear have been silenced.

Some have got used to this dark season. They have thought the spring will no way arrive, and organized a way of living accordingly. However, since we knew that the spring would certainly come, our eyes have been on the future days which will be the times of a new revival.

Thousands of years the same scene have been played for the man in order that he sees, ponders and reflects, and finally comprehends that there is a power which revives every living being in every spring every year. For the last a few weeks a wave of revival movement has passed across the northern hemisphere: yes, a new spring has arrived once again.

The flowers, plants, insects and some animals vanish in the winter. They cease to exist. Those living creatures which make people happy with their being there in the outside leave us alone. Winter surrounds the environment with its harsh conditions. It rains and snows for nights. Most of the living beings are gone. However, they are all revived in spring with an absolute similarity. This is just a sign of mercy restoring life after its death.

Some do not want to realize this reality despite the things they see; but it is the power over all things, which realizes the things all the people suppose impossible.

Yes, a new spring has arrived! And it will be the season of a long summer and full of light.