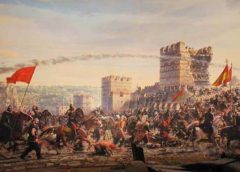 “The greatest obligatory duty in this time is to work for the Islamic unity. The aim and objective of the unity are to vibrate such a long luminous (blessed) chain that connects the Islamic centres and mosques/masjids and milieus which are branched out in subdivisions and thereby to awake those who are tied to that chain and to lead them towards the path of development with desire and command of conscience.” (Bediuzzaman, Damascus Sermon, 90)

Louis Pasteur, the famous French chemist and microbiologist, used to give his students the following advice:

“Work and never give up the business that you have your heart in. If a man gets accustomed to working, he can’t live without it. Everything in the world is dependent on working. Whichever occupation you choose, always set a high goal. Love great people and great works. Take them as examples for yourself.”

The School of Suffa

The establishment of the Suffa School within the Masjid al Nabawi was important in terms of recording and determining the Sunnah as a precaution that Prophet Muhammad (PBUH) himself had taken. The Ahl as-Suffa, most of whom were single and poor immigrant companions, used to stay there for days and nights, listening

to the Prophet, learning the Qur’an and literacy, and engaging in knowledge and dhikr at all times.

It is enough to see that Abu Hurairah (ra), Abdullah Ibn Umar (ra) and Abu Said al Khudri (ra) were among the companions who narrated the most hadiths to understand how this institution played a very important role in preserving the Sunnah.

Laws of war in Islam

Before the battle of Mu’tah many Muslims had come to the hill of Thaniyyah together with the Prophet Muhammad (PBUH). The Prophet stopped there and addressed instructions the fighters with the following instructions:

I advise you to carry out the commandments of Allah (SWT), to stay away from what He prohibits, to be good to Muslims who are with you and treat them well.

Fight in the name of Allah in His path! Be just about the spoils of war! Keep your loyalty and promises! Do not kill children! Do not kill women and old men! Do not cut and burn trees! Do not destroy houses! You will find some men who are secluded in the churches of Christians and have devoted themselves to worship. Never touch them!” (Ibn Majah)

I wish for your intercession, O Apostle of Allah!

It has been narrated that after decease of the Prophet Muhammad (PBUH), a Bedouin came and threw himself on the grave of the Prophet, so that his body became soiled and muddy. He said, “O Messenger of Allah! You have said, and we have heard and believed in the verse that was revealed to you, which is “If, when they wronged themselves (by committing a sin), they but came to you and implored God to forgive them – with the Messenger praying to God for their forgiveness – they would find that God is One Who returns the repentance of His servants with liberal forgiveness and additional reward, and All-Compassionate.” (Nisa’, 4: 64)

Now, I have wronged myself! I have come to you! I wish for your intercession, O Apostle of Allah! I pray for forgiveness from Allah (SWT) because of my sins! You also wish for forgiveness for me from my Lord!” Ultimately, it was called out to him from the Messenger’s grave: “O man! You have been forgiven!” (Nasafi)