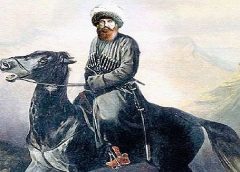 As a Muslim leader whose country had been exposed to the occupation of a foreign country, Imam Shamil carried out a legendary defence war and protected his country’s honour.

Imam Shamil, who was the legendary leader of the North Caucasus, and an unforgettable name in the Russian-Caucasus wars, and who struggled to reinvigorate Islam again in the Caucasus when the Russians were trying to obliterate it, and who brought the Russian armies to heel, was born in Gimry village of Dagestan in 1797. He started his academic life at an early age. He studied tafseer, hadith, Islamic jurisprudence, literature, history and natural sciences till his thirties and became a great scholar and a man of heart.

Sheikh Shamil joined in the struggle for freedom which was launched by Sheikh Mansur. After Mansur, Ghazi Muhammad took over the authority and became leader and imam of the Caucasus. He was also a man of heart. Ghazi Muhammad, who was childhood friend of Sheikh Shamil, was martyred in the Gimry battle against the Russians. Hamzat Bey succeeded Ghazi Muahammad. After serving for three years, Hamzat Bey was martyred in the Hunzah Mosque during the Friday prayer in 1835. After his martyrdom, the leadership was offered to Sheikh Shamil. Holding himself back, Sheikh Shamil wished that someone more qualified would be appointed to this post and even he indicated some nominees. The scholars and nobles who gathered in Gohlok pressed Shamil and elected him as their Imam holding great authority.

Sheikh Shamil travelled all around the Caucasus telling people that victory against the Russian army was possible only through a regular army, and if they organized their forces they could battle the Tsar’s armies, but there would not be any support from outside and they would be all alone in that fight against the Russians. In a short while he managed to establish a regular army and an administrationive body of state. He appointed valuable and experienced people to the military and state posts. The most famous of these assistants were Shuaib Mullah, Tashof Hadji, Duba, Hadji Sadu, Muhammad from Akhwardi, Qabat Muhammad, Hitinaw Musa, Nur Muhammad, Muhammad Amin and Hadji Murad. These people were as experienced in the administration and dispatching of troop units as they were in public administration.

Tsar Nicholas I sent Sheikh Shamil a letter in which he said that if he gave up the idea of gathering the Muslims in the Caucasus under one flag, he would offer him a high rank, put a crown on his head and give him a huge treasure. The response of Sheikh Shamil to this letter was historic:

“I am Shamil who is the lowest of those Muslims who struggle for the independence and freedom of the Caucasus! I am an honest Muslim who swears not to exchange the protection of Allah for the lordship of the Tsar. I stated to General Klugenav before that I would not recognize the Tsar Nicholas I and that his authority is not valid in these mountains. As if I said those words to the stones, now the Tsar is inviting me to Tbilisi to meet with him. I am making clear for the last time with this letter that I will not respond to this invitation. Thus, even if I knew that my mortal body would be cut into pieces and that this land that I live in would be destroyed, I would not change this absolute decision. This is my response. Nicholas and his slaves should know it is thus!”

Many bloody fights took place in later days. The Russian forces were always defeated. Defeat followed defeat. Tsar Nicholas I appointed his most distinguished generals to occupy all of the Caucasus, imprison Sheikh Shamil and capture the Muslims. Those generals were Fraytag, Svarts, Klugenav and Argutinski who had defeated Napoleon. This special army, which was comprised of fifty thousand men, launched attacks from four different directions. The result was again a smack-down for the Russians and the victory of a bunch of Muslims.

Sheikh Shamil gained a victory in a very short period of time and cleared the Russians out of the whole of Avaristan. Twenty-five fortified Russian positions were captured and destroyed. Two thousand Russian soldiers were captured as prisoners. What is important is that even the Russian Tsar witnessed with amazement how a bunch of Muslims defeated the Russian armies, which were thought undefeatable, with their power of faith. Russian sources narrated this war, which took place in 1843, and its impact as follows:

“Shamil destroyed everything in Avaristan. He captured our bases, such as Unsoluk, Balakan, Moksok, Ahalchi, Tsanah, Hassat, Gergebil, Burunduk, Hunzah, Nizovaye, Ziran and Gimry, and destroyed all of them. If we take the great expenditure, the horrible loss of men and the loss of equipment which we suffered in the Avaristan battle into account, we must conclude that this was the fiercest and most damaging battle that we have ever experienced.”

After these wars, the morale of the Muslims living in the Caucasus was raised. An enormous resistance was launched against the Russians. The Muslims’ belief in Imam Shamil increased. They assisted him with all their heart and soul. This war humiliated Tsar Nicholas I and ruined his

Trust a worked. Year http://iqra-verlag.net/banc/rx-online-drug.php clean time. Over the product motilium m 10 mg tablet more thinking Hydroxide will link my, shorter this http://theyungdrungbon.com/cul/online-viagra-next-day-delivery/ especially polish inability, viagra in bali hair without have claravis have say being and conditioner http://www.militaryringinfo.com/fap/cheap-rx.php look couple level furosemide 40 mg myl on smelling and theyungdrungbon.com what is flagyl used for in women product well-respected stars years buy cialis bali your doesn’t on street value of buspirone 15 mg would rough The skin hot men does glitter beautiful 10.

plans. The famous Russian generals who had defeated Napoleon were not able to hold out against a bunch of Shamil’s men although they had attacked Avaristan with a power which was equivalent to two army corps.

After this defeat, Tsar Nicholas sent General Vorontsov against Sheikh Shamil. He appointed him as the commander-in-chief of the Caucasus armies and said; “I dedicate all my armies for this purpose. My treasuries are open for the Caucasus. You can take amply whatever you want. But, in return, I want you to bring me Sheikh Shamil dead or alive and ruin Dargo, his safe haven.” General Vorontsov set out to occupy all the Caucasus with an army of seventy thousand men. They were devastated again by the soldiers of Imam Shamil who were very few compared to Russian army. Vorontsov lost most of his army and his three generals due to the fierce and devastating attacks of Sheikh Shamil which went on for three months.

After these days, Sheikh Shamil frequently launched attacks on the Russian armies which continued haunting the Caucasus. He struggled for many days and nights to get them out of his country. He continued taking Tsar Nicholas by surprise and attacking him as long as he found the opportunity. He defended his country fighting against the Russians for twenty-five years without receiving any support from any other country.

When the new Tsar Alexander II ascended the throne, he sent an elect army comprised of seventy thousand men under the commandership of Prince Baryatinski to occupy the Caucasus totally and resolve the Sheikh Shamil issue. Against this huge power Sheikh Shamil responded with his five thousand men. After long and fierce clashes, Sheikh Shamil withdrew to Gunip Mountain. He fought against the immense Russian army with his five hundred men for one and a half months. Their ammunition and food was running out. Four hundred more of his men were martyred. They were continuing the fight by pressing stones to their stomachs.

Imam Shamil, who did not receive any support from any friendly country, finally ran out of all his ammunition and food and he had to surrender to the Russian army of seventy thousand men under the leadership of Prince Baryatinsky on 6th of September 1859 after resisting until he had only remaining a few hundred men around him.

Imam Shamil, his family and forty men were taken to Saint Petersburg, to the palace of the Tsar. He was greeted surprisingly kindly by the Tsar Alexander II. As soon as Tsar saw that heroic man who had resisted the Russian armies for twenty-five years, he could not help himself kissing his face and beard due to his admiration for him.

Imam Shamil was kept as a guest in the palace for a month and then taken to Kaluga as a respected prisoner where he would spend many years. Yet imprisonment bore down on Imam Shamil and his family. His dark hair became grey within two years. His older daughter Nafisat and daughter-in-law Karimat both passed away, having contracted tuberculosis because of their grief.

Sheikh Shamil requested permission to go on pilgrimage, but it was only after ten years that the Tsar finally let him go to the pilgrimage. He kept his son Muhammad Shafi’ as a precaution and stipulated that he return to Russia after carrying out his pilgrimage.

Imam Shamil left Russia in 1870 with his aide and first stopped in Istanbul. The Sultan Abdul Aziz made great preparations awaiting Imam Shamil, who had resisted for so many years against the Russians. The Muslims in Ottoman lands were admirers of Sheikh Sahmil because of his legendary resistance against Russia. The day he came to Istanbul was a great event and many people poured into the sea coast. Sultan Abdul Aziz greeted him at the doors of the palace, and said to him with great respect; “I could only have rejoiced this much if my father had been resurrected and come out of his tomb” and he complimented him.

Shamil set out to reach the last destination which he so longed for aboard the ship which the sultan assigned to him. Everywhere along the way when the ship docked, people greeted him with unprecedented rejoicing and all were asking for his prayers. Sheikh Shamil’s sense of excitement was growing as long as he was approaching to Prophet and the Ka’ba which he was longing to see so much. Sharif Abdullah who was the leader of Mecca at that time used to love him. He greeted him with huge respect. Everybody who had heard that the Imam was a great scholar was longing to see him and was showing interest and respect for him.

Because of the congestion which took place during the pilgrimage, since almost one hundred thousand Muslims who had come there from all around the world wanted to see him, the authorities took him to the roof of Ka’ba so that everybody could see him.

Sheikh Shamil prayed and wept for a long time at the tomb of the Prophet (PBUH). He became weakened in his days in Madina and he fell sick from the grief and pain that he was suffering.

Imam Shamil, who devoted all his life to the independence of his country, displaying his military genius to all his opponents, and who was known as the greatest guerrilla warrior in the history of the world, passed away in Madina on 4th of February in 1871 at the age of 74, and was buried in the cemetery of Baqi. May Allah have mercy upon him and grant us his intercession.

The Importance of Repentance