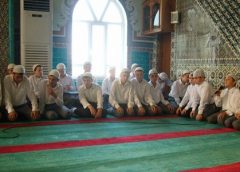 Before Qur’an’s great transformation, the life in the Arab peninsula was harsh and hard in terms of not only geographical or physical but also moral and spiritual conditions. The religion of prophet Ibrahim, once was illuminating and guiding, had been distorted and there were a few people who are following it. Paganism was widespread all around the peninsula and the Ka’ba, the house of Allah, was full of them. This plenitude in belief was reflected to social life as well and people behaved however they wanted in their relations with other people regardless of any straightforward principle. There was no a unique belief of god which would guide them to the right path.  Among many incomprehensible traditions and customs of them, burying daughters was the most blood-tingling one.

The basic motivation behind that evil custom was the feeling of the shame for having daughters. They would consider that having a daughter degraded their honour in community. The story of a man who told how he buried his daughter before being a Muslim in the presence of prophet is famous. It is told in the books that even though the prophet (PBUH) was crying because of the heart-wrenching event that the man was telling he did not let the other companions to prevent the man to tell the event, that is his horrible murder. The man was telling to the prophet (PBUH) that the child’s mother had dressed her up and he had said to her that he would take her to her uncle. At the end, when they reached to the pit which the man had excavated as cemetery for the girl he pushed her to the pit and began to cover her up with the soil. The little child was imploring to her father and asking what he was trying to do however the man was trying to end his work as if he did not hear anything. Then, suddenly the little child said to her father with a true compassion and mercy, “O father, your clothes got dirty with soil” and she was trying to whisk her father’s clothes while her father was burying her alive. Of course, the man did not act without feeling any mercy, pain or hurt in his heart. Indeed, he completed his work hardly and it was very difficult for him to do this. However, that was a mission which he would be charged by society which was in the grip of the devil.

In my opinion the reason why the prophet did not let his companions to prevent man from telling that story which was an agony to listen it is to show how Qur’an transformed that society. A man acting like a monster may turn into a repentant and regrets for his atrocious murder by the effect of Qur’an.

That evil custom was the horrific murder of history. Unfortunately, the same tradition goes on under a different guise today. Our sons and daughters are killed spiritually and morally and they are away of the enlivening effect of the Qur’an. “When the female (infant), buried alive, is questioned. For what crime she was killed” (al Takwir, 8-9). Of course the crime of female (infant) will be nothing in hereafter. However we cannot say the same thing for males and females of today who are murdered by system of debauchery. Debauchery is the last phase of system and all game is played for purpose of engaging youth by using distracting subjects. That is the system of manipulating society and youth for evil benefits of lords of system.

I believe that if the teachings of Qur’an are reached to youth they will find real peace and sobriety. With a sound, spiritually healthy youth, the humanity may turn this world and next world into a heaven.

One thought on “Youth and the Qur’an”