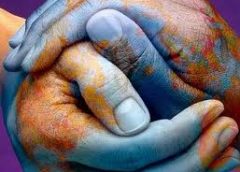 Deep awareness of the suffering of another coupled with the wish to relieve it, that is shortly kindness and compassion, corner stones of civilization and humanity.

Civilization, this term and definition supposed to have a positive meaning. Indeed it has. But what kind of a civilization is that? A civilization where people doesn’t care about each other and just individualize more day by day? Or a kind of civilization when some people are losing their life as a result of unhealthy and poor life standards while some others are getting fatter and fatter?

Or are we talking about a civilization that all the people care the rights of others even animals? There is a perfect example of this; Allah’s Apostle forbade his Companions to keep the dumb creatures hungry or thirsty, or to disturb or overburden them intentionally and he called those doing the reverse as tyrants. He commanded kindness to animals and putting them at ease as meritorious acts tending to bring men nearer to Allah.

Caring about other people and other living things… Caring about them… This is the starting point of civilization. Everything starts in the smallest circles.

There is one strong power in Islam, which makes people to think about others who are in need. This is fasting. And Bediuzzaman gives us a good lesson of civilization as following;

“One of the many instances of wisdom in fasting from the point of view of man’s social life is as follows:  Human beings have been created differently with regard to their livelihoods. As a consequence of the difference, Allah Almighty invites the rich to assist the poor, so that through the hunger experienced in fasting, the rich can truly understand the pains and hunger which the poor suffer. If there was no fasting, there would be many self-indulgent rich unable to perceive just how grievous is hunger and poverty and how needy of compassion are those who suffer them.” (from the Risale-i Nur Collection/The Letters/29th Letter-Ramadan Treatise-Third Point)

There is no that kind of a help or support system in any other civilizations but Islam. This perfectness truly and deeply makes us understand the definition of humanity.  So, should we start questioning ourselves and the civilization thing which is imposed on our minds?