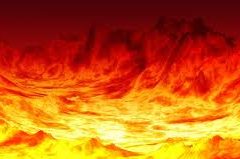 There are many people in the society who have difficulty in understanding the reality that the heaven and the hell are eternal and unfortunately many deny this truth. However, as stated in the verses such as: “Certainly, those who believe, do righteous deeds, and whole-heartedly submit to their Master, such are they who are the people of Paradise. Therein, they are forever residents.” (Hûd, 23) and “As for the deniers of the truth who belied Our verses, such are they who are the companions of the fire. Therein they are the eternal residents.” (Baqara, 39), it is evident that there is an everlasting life in the hereafter both in the heaven and the hell. Of these two eternal places of residence, people are more inclined to raise objection against the eternity of the hell, which is the eternal place of torture. In this context, sticking to their ill-willed minds and interests instead of the clear verses of the Qur’an, people go astray coming up with statements like: “Allah is most Merciful and most Just, so how come can he put people into an eternal hell.”

When we look at the roots of the problem, first it seems that a non-believer commits limited number of sins in all of his/her life. Even if one’s life is completely filled up with bad deeds, because this world’s life takes no more than nearly a hundred years for every person, it cannot demand an eternal punishment. However, this kind of a superficial approach basically falls short of encompassing the details of such a profound matter. Now we will try to point out some of the major reasons behind the eternal punishment of non-believers in order to understand how a limited worldly life may entail eternal punishment in the hell.

First of all, the meaning of disbelief (kufr) is to deny the existence of Allah, in the first place, and the other pillars of belief such as belief in the prophets, angels, hereafter and others. This denial seems to be a mere utterance of “There is no God”, but in essence, it means denying the God, who has created everything out of nothing, who is still preserving and maintaining everything, who fulfils the needs of every creature from the tiniest particle to the biggest one, and so on. That’s to say, non-believer denies that His being God with all His names and attributes, which are pre-eternal and post-eternal. So, because he denies all those names and their numberless manifestations in the universe, he commits an absolute crime attributing them to the nature or reasons or regarding everything as happening on their own. As a result, this profound denial requires a never-ending punishment in return for denying them all.

For example, imagine a marvellous picture drawn by the famous artist Picasso. It apparently reflects Picasso’s great talent, knowledge, artistic taste and some other artistic attributes. If someone comes and says: “This picture is very ordinary and simple and it came into existence on its own”. You clearly understand that he is downgrading the talents of Picasso and insulting him. In the same way, Almighty Allah (swt) created the flowers, birds, trees and all the creatures manifesting his endless knowledge, power and wisdom on them. In this case, the denier of the Creator downgrades the manifestations of His names and insults the owner of the art. It is obvious that such a person who behaves in this way deserves the punishment in order that rights of His names are preserved.

Furthermore, creatures perform a duty towards their owner, Almighty Allah (swt), who created them so that they would worship Him and glorify Him. (And there is not a single thing but glorifies Him with His praise). However, a non-believer regards all the creatures including the cells in his body as idle beings having no purpose and value in their lives, actions and movements. In this case, the non-believer reject their testimonies to the oneness of their creator and insults the rights of all creatures, thus committing crimes in the number of all the beings that came and will come into existence in the universe. Such an endless crime also requires an endless punishment.

For instance, imagine that there are a hundred employees in a company, where everybody is so obedient to their employers and perform their duties peacefully with each other and they all get paid regularly. However there is one person in the company who doesn’t follow the orders of his employer and is always lazy. He even disturbs the others, regards the work they do as meaningless and calls them to behave like him. However, when the workers complain their employer about that person, he dismisses him right away because of the disturbance he has caused the other workers and his indifference towards his authority. In the same way, the creature, which are in fact serving for their Lord, are invaded by such non-believers, naturally complain their Lord about such people and it involves their punishment.

Another proof for this reality is that it is doubtless that a non-believer will stick to his disbelief forever although he was given an eternal life in this world. This is because non-believer’s spiritual essence is distorted through his bad conducts. Therefore, he gains an ability to commit crimes forever. As a matter of fact, some non-believers know that they will never convert to Islam nor will leave their indulgent way of lives no matter how long they stay alive. After all, Allah (swt) foresees that situation with His Pre-eternal and Post-eternal knowledge. Based on these evidences, it is sheer justice to punish them eternally.

When it comes to the legal punishment system in the world, a person who murders someone is sometimes sentenced to penal servitude for life or even to capital punishment. By analogy, if someone who commits a crime taking place just in one minute is sentenced to decades of imprisonment or even executed, which add up to millions of minutes of imprisonment, imagine the magnitude of the absolute crime of a non-believer through insulting the rights of the universe, denying the eternal names and attributes of Allah and understand how just it is to sentence a non-believer to eternal imprisonment.

As a result, despite his smallness compared to the entire universe, man violates the rights of all created beings, denies their testimonies to the oneness of Allah (swt) and disclaims the eternal names and attributes of Allah (swt), and so deserves the eternal punishment.

May Allah preserve us from the hell.

Note: If you would like to get detailed information about this subject and related topics, you may refer to the following parts of the Risale-i Nur Collection: Flashes,12th Sign of the 13th Flash; Words, 9th Truth of the 10th Word

One thought on “Why is the hell eternal?”