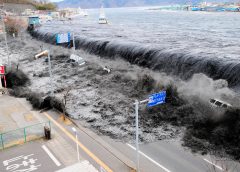 It is not rare that we open up our eyes to a new day hearing a news story of a tragic natural disaster which occurs in a far corner of the world or may be in our country and sometimes it is possible that we find ourselves in the middle of such a disaster.

At other times, we always complain about the high rate of criminality in our communities. There is no such a country in which any sort of crimes are not committed; murders, all kind of robberies, rapes, child molestation, blackmailing, intimidation, bullying, kidnapping, libelling, and etc. More or less all these crimes fill the pages of dailies and news shows of all countries.

Therefore, our lives are full of nature-related disasters and human behaviour based crimes that some call both as the evils of the life. These evils are challenges in the life which make it difficult to live. Since the beginning of the human history these evils have been source of most of the pains that man suffers.

This issue is called as the problem of the evil or theodicy in philosophy and theology and a large amount of literature have been written regarding this issue. While some have concluded from those discussions that there is not a god who will prevent these evils the others have tried to defend the existence of a god reconciling his existence with the existence of the evils.

As can be seen in the argumentation the existence of an omnipotent, omniscient and omnibenevolent god’s existence is contradicted with the existence of evils. Thus, a world without evils is considered as normative situation.

The works of the latter group of thinkers is called theodicy which usually refers to an attempt to resolve the evidential problem of evil and reconcile God’s traditional characteristics of omnibenevolence, omnipotence and omniscience (all-loving, all-powerful, and all-knowing) with the occurrence of evil in the world. Although such arguments have existed for centuries, the term theodicy was coined in 1710 by German philosopher Gottfried Leibniz in his work, Théodicée.

When we look at the history of Islamic thought, first Ghazali draws our attention with his maxim which reads as “this world is the best of all possible worlds”. This idea was reiterated by Leibniz in his theodicy argumentation also. According to Ghazali’s idea, in spite of evils which appear in the world the absolute justice of Allah has manifested itself in the life.

Yet, this idea has not gone without criticism. Abu’l-Ala al-Ma’arri and Ibnu’r-Rawandi asserted that claiming that this world is far from evils is closing your eyes to the facts and they portrayed a quite pessimistic picture of life. On the other hand, al-Biqai and Ibnu’l-Muney contended that arguing that “a better world than the present one is impossible” contains theological problems.

Imam Bediuzzaman Said Nursi brings up a variety of approaches to the problem of evil in different parts of his collection in the form of a harmony of the traditional Islamic thought and Islamic sufism. For Nursi creating or conferring existence on evil is not an evil, for people have free will. What makes them evil is people’s preferring them.

We could mention several approaches for comprehending the evils. The first one is free will approach. If Allah had reflected its absolute justice into the life and controlled everything with force then we could not mention about free will of human kind. Without consulted, we would be obliged to commit good deeds. But that is not the case and we are free to prefer anything to do and when we choose anything to do we may get into mistake and cause an evil.

A good example that Nursi gives is the creation of the rain. Rain is the vital and indispensable natural phenomenon created by Allah which is necessary for the survival of living beings. However, lots of floods take place every year and some people get damaged. These people who get damaged because of rain perceive it as evil and hold it responsible for their damage. They do not consider their free choice, which they did, of settling besides a river which will most probably flood. They do not think they get themselves into damage with their choice and they cause evil itself. Such kind of examples in which man turn it as an evil for himself can be proliferated.

Another approach for comprehending the evils is selfish anthropocentric perspective of man about the events which means regarding human to central to everything that happens. Of course, this is a natural process for man because first of all you look through your perspective to understand and process the things. However, if we stuck in our perspective and do not try the other angels to evaluate the events this will lead us into misinterpretation of the events in the long run.

Think about the snow, a natural phenomenon as the work of Allah. There are lots of functions which snow renders in the order of the nature. If it was not for the snow a lot of elements in the nature would be disrupted and maybe the life on the earth would be threatened. And, perhaps, there are more uses that Allah provides us through the snow than we know. Now imagine that because of heavy snow we could not reach our work, home or any kind of destination and we think that the snow is evil which prevents us from doing our work.

That selfish perspective of man applies to every incident that occurs in the world and in his individual life. The incidents that happen to us or the accidents and illnesses that we get into are seemingly evils but they are part of a larger plan and wisdom. If we could look through this larger perspective and see beyond the events we will see that they are not evils.

Imam Nursi goes further and argues that even the creation of the devil is not evil since they cause a great manifestation of good in the world. He says that the devil and his plots that he planned for the people cause them to strive for good and they cause the good essence of people to be manifested. For him, since Abu Bakr (ra) resisted to plots of devil his golden character emerged and since Abu Jahl indulged the devil’s whispers he declined to that low position. In brief, struggling with devil manifests what man has inside as a character. Is it Jewellery or a bunch of coals?

All in all, the problem of evil is mostly related with perspective that we look with. A more subjective perspective will show us that the world and life are full of with evils. The other aspect of the issue is our free will. Do we think that we are responsible for our actions or not? This kind of understanding may help us see the wisdom behind the events.

One thought on “Why did Allah create the evils?”