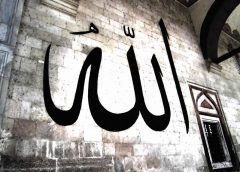 Allah, the Creator of the worlds, has made Himself known to humans through harmoniously ordered works of art. He has endeared Himself to them by way of the ornamented fruits of His mercy. He has manifested His love and mercy upon them through the diverse blessings that He has bestowed upon them.

Allah has manifested the kingdom of His Lordship with wisdom, harmonious order, justice and a balance that runs through all things, from particles to suns.

Allah has endless generosity, inexhaustible riches, treasuries that never dry out, nonpareil eternal beauty and flawless eternal perfection. He has ornamented of the earth’s surface with such beautiful works of art; made the moon and the sun into two lamps; the face of the earth a table of blessings and filled with multifarious foods.

Allah is the Compassionate Lord, the pity and mercy of Whom is endless, Who is aware of the least need of the least of His creatures, and comes to their aid with perfect compassion and whence they would never expect. He is the One Who hears the softest voice of the most hidden of creatures and helps them – Who responds, in the language of both state and speech, to every requester.

He has the sublimity of Lordship that subjugates and directs all existing beings from suns and trees to the smallest particle as if they were obedient soldiers. His sublime Lordship is in control of the sublime activities like the changing of seasons that are witnessed in this universe; the sublime, aircraft-like movement of the planets; the astonishing subjugations, like that of the earth’s having been made a cradle for mankind, and the sun a lamp for all creatures; the vast transformations like the bringing back to life and adornment of the dead, dry earth; He rules with a glorious Rulership.

The Eternal Artful Maker of this transient world possesses another, ever-abiding world unto which He drives his servants, and for which He is enkindling their yearning.

Allah has honoured human with the vicegerency and the trust, and made him to ascend to the degree of lieutenant and witnesser due to his proclamation of Allah’s unity through his witnessing of the universal activities of Lordship. Allah has manifested much importance to man through making him the most all-embracing fruit of the tree of the universe, and the gentlest, and the most extremely delicate, the most supplicant and one whose wishes are the best received, by addressing him directly and subjugating to him all things.

He employs us for the sake of the realm of eternity; and He invites us thereto. All people possessing bright spirits testify that He will transfer us to that place. All of the spiritual poles of illuminated hearts, and all those endowed with luminous intellects, who have broken through the exterior and reached reality therewith, also testify to this reality. Those who were honoured with closeness to the Divine presence also testify to it. They report this to us all agreeing that He has readied a reward and a recompense. Again and again, they convey to us that He has made a very strong promise and a threat that is most severe.

Allah has made human, of all creatures, a being universally addressed, and an all-embracing mirror of Him; He causes him to taste all that His treasuries of mercy contain, introducing all of this to him, and then causing him to appraise it all. He makes Himself known, with all of His Names, to man, loving him and endearing him to others.

Then is it at all possible that Allah would not send this poor human being to a perpetual kingdom nor invite him to a realm of perpetual happiness, nor gladden him? Of course He will wake human up after entering the grave, ask about all that he has done, big and small, and make him journey to the Resurrection to behold the Supreme Court of Justice.

And Allah is of course aware of the greatest need of the greatest of servants, and the most beloved of all creatures to Him (i.e. the Prophet Muhammad pbuh); He will fulfil it and come to his aid. He hears that most sublime prayer, and will accept it.

Allah the Almighty, Who turns about the earth like a pebble in a slingshot, will certainly remove this earth from the path of his guests journeying to the Hereafter.

He will certainly gather, with a single call, all of the fundamental particles and original constituents of the body, each of which became acquainted with one another by flocking together under the system of the battalion-like body.

Allah, The Merciful and Compassionate, will ready a realm of recompense, and bestow eternal happiness upon the believers

Allah will reward the believers who take refuge under the wing of protection of His Lordship, and who only act in true faith and servanthood. He is going to honour the elect of His servants in the eternal world, and will bless them with hospitality and outpourings of blessings “that eyes have not seen, ears have not heard, and that have never even occurred to man’s heart.”