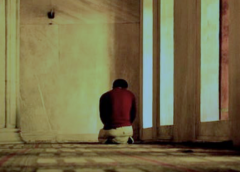 What do the movements of salah such as qiyam, ruku’ and sujud represent?

Niyyah is the decision of the heart,the  declaration of the reasons behind each action. It means to intend saying ‘yes’ to Allah (SWT) by obeying His commands.

By saying Allahu Akbar (‘Allah is Greater’), we toss the entire world behind us with our hands and seek refuge in the mercy of Allah (SWT). It is to affirm that Allah (SWT) is the greatest by saying takbir (Allahu Akbar).

With this principle in salah (prayer), human beings represent the worship of the angels and of trees which stand and praise Allah continously. Qiyam is the human beings’ standing before the Eternal Being (SWT) with their bodies and hearts. The head’s being bowed in qıyam represents the lack of pride and modesty of the heart.

Qira’at is to be grateful to Allah for His flawless perfection, inimitable beauty and infinite mercy, by saying Alhamdulillah (‘Praise be to Allah’). It is also to indicate that all deeds come into existence with the help of Allah and that praise is reserved for Allah alone. It is to be connected to the Eternal Being (SWT) by saying, “(O our Master!) You alone do we worship and from You alone do we ask for help” (iyyaka na’budu wa iyyaka nasta’in).

In this state, human beings represent the worship of the angels who serve Allah in this position of bowing continously, and animals that are always standing in ruku’ on their four legs. Ruku’ means to glorify the great Creator with the entire universe while seeing our weakness and poverty by saying, “Subhana rabbiyal ‘azim”(Glory be to my Lord the Mighty)… and to struggle in order to grow its roots in our hearts, and in order to raise our head from ruku’ with the hope of attaining Allah’s mercy by repeating our mention of the greatness of Allah.

In this state, human beings represent the worship of the angels who serve Allah in sujud continuously and reptiles which seem to be in a constant state of prostration all their lives.
Prostration (sujud) is to abandon everything other than Allah (SWT) by saying, “Subhana rabbiyal a’la” (Glory be to my Lord the Most High) in modesty and awe before Allah’s flawless beauty, brilliance, holy names and attributes. “A slave becomes nearest to his Rabb (Lord) when he is in prostration. So increase supplications in prostration.”(Muslim)

In this state, human beings represent the worship of the angels who serve Allah sitting, and also of the mountains, as rocks seem by their very shape to be sitting. A human being confirms that everything he owns belongs to Allah by reciting the tahiyyah (greeting) in this sitting position. He renews his faith by declaring the kalima-i shahadah (“There is no God but Allah and Muhammad is His Messenger”). In salah there is a kind of Mi’raj for a believer, as the words of the tashahhud recall the holy conversation between Allah (SWT) and the Prophet Muhammad during the Mi’raj (the Prophet’s night journey and ascension).