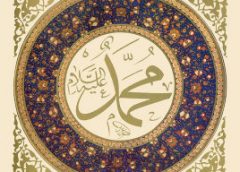 As I was still a little kid, just after acquiring the ability to read, I started devouring many many books, as they were whole new worlds to be discovered. It happens that; just around this time, as I was realizing many alien-then things, an image both standing out and outstanding would be with me, guiding, for many years to come:

After his elevation by revelations, he then would step on a physical one to call out to the people whom he knew all his life. He would then ask them;

‘O people! Will you believe me if I say there is an army marching behind this mountain which is about to attack you?’

They all answered, ‘Of course we would, we have not heard a lie from you throughout your life’.

He then said, ‘O people of the Quraish! I warn you to fear God’s punishment. Save yourself from the fire. My position is the same as that of the sentry who sees the enemy from afar and warns his people of the danger of their enemies. Does such a person ever lie to his people?’

Enter growth and aging, this image is still as vivid, still as impressing and still as influencing as I first read the life of Prophet Muhammad (pbuh). Along the journey I had up till now, this image continued to grow to have side meanings, getting a more powerful message and so on.

It is curious that out of many

qualities he had throughout his(pbuh) life, most prominent is being righteous, even to the degree that he was nicknamed as “Muhammad-ul emin”(Muhammad the trustworthy). I would like to divert attention here to that; prophet Muhammad(pbuh) was just as righteous as he was before he started receiving divine inspiration and revelation, which can also be seen in the exchange of words between him and audience at that particular and many similar events.

He continued being righteous in his actions and words throughout his lifetime even after 40 years of age, at which age he started to spread the message of Islam. The result is that even between people not believing in his message; he would still continue owning his status as being the most trustworthy of all.

It goes without saying that Hz. Muhammad being the epitome of mankind and serving as a model, suggests that one of the foremost qualities of a person who claims to be muslim is trustworthiness. A currency losing its value nowadays unfortunately. I would like to remind some ayat and hadith on this;

“It is those who believe not in the Signs of God, that forge falsehood: it is they who lie!”[2]

“Narrated Abu Huraira: The Prophet said, “The signs of a hypocrite are three: 1. Whenever he speaks, he tells a lie. 2. Whenever he promises, he always breaks it (his promise ). 3. If you trust him, he proves to be dishonest. (If you keep something as a trust with him, he will not return it”[3]

Closing, I pray for a Ramadan in which we all can try to achieve being closest to what our Prophet Muhammad (pbuh) did accomplish.