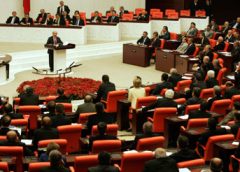 ‘Securitization’ in international relations theories is a concept describing exactly how to reach through words where the words fail. The term is first coined by Ole Waever and examines how a certain issue is transformed by an actor into a matter of security through speech acts.

According to Waever (1995), something is transformed into reality as soon as it is articulated and verbally expressed. Securitization, transforming an issue into a matter of security can be succeeded in constructing that issue as a security problem through speech acts. The state of security or insecurity has a communicative nature and occurs through the action which comes into existence via communication.” (see SETAV Report, Araştırma Merkezleri’nin Yükselişi (The Rise of the Research Centers) , Güvenlik maddesi (Article of Security))

I do not want to bore you with my theoretical quotations. I intend to emphasize that our language has become completely security-oriented after the latest terrorist incidents and the operations aftermath, and this will not help us neither in short nor long term in dealing with the Kurdish problem which is the mother of the problems with Yalçın Akdoğans’s words.

Statements emphasizing the power of the state, highlighting the security of the country and expressing that the terrorizm will be fighted can be accepted from high state officials. But if this situation or a vengeful and inclusive discourse is widespread in such a multi-dimentional and multi-layer matter as the Kurdish problem among the segments of the society, it is a sign of serious problem. At least ‘turning back’ from this is possible. When everything has settled down, the ones with harsh discourse who at least could not say “keep silent for now, let the army do its job”may be ashamed of themselves once it is turned out that they worked for others’ interests. They will also ve responsible! Because it is crucially important from faith point of view where your stand is and whose part you support.

The terrorist organization is like the devil; its most evil whisper is to make people forget that it is working for others’ interests and make people accept that it is the owner of the cause. Its greatest ambition is to make the nation believe if the terrorists are ambushed in their cave, the terrorism and all the problems will end. Through continuing its activities after vast operations, it aims to drag countries into helplessness and weakness and make the state accept its demands in the end.

We should not fall into the trap of this whisper! Although there are some naively asserting the contrary, the recent events have not increased because of the increase in organization’s sensitivity to the Kurdish question. They came after the ‘undesirable’ AKP policies (from March 1st memorandum till Syrian policy) stirring up the hornet’s nest in the region and international arena.

Aware of these realities, our constant agenda should be constructing service and compassion oriented civil policies not targeting the terrorist organization and BDP, Peace and Democracy Party but the public.

As Mazhar Bağlı, an important figure of the ruling party and in the region said, “Kurdish question has an PKK problem but PKK has no Kurdish question.” Even BDP has neither legitimacy nor a Kurdish question! But we have! The following sentences from Mazhar Bağlı’s interview to Fadime Özkan from the daily Star points out to the center of the problem: “They realized that they will not be able to have a free hand in the region without changing the socilogical codes of the region and they made a vast erosion of the values in the region. PKK and its derivatives realized such a degeneration in 20 years which could not be achieved by the the single-party and nationalists.”

We hope that the government which in recent years understood the language of the region, learned how address to the conscience of the people, conservatist NGOs and committee of wisemen which have got out of their problems and started to reflect upon Kurdish problem, and writers, columnists and authors with good sense will not resort to statements giving the impression that the presence of mind is lost abondoning themselves to the recent incidents but preserve the language of balance. Acts of heroism over our martyrs may seem desirable to some. And operations making us believe that their revenge is taken may excite us. But neither heroism nor armed struggle alone can guarantee a good and secure future for the country and next generations. Civil attempts are as much vital for guns to stop as guns are important for a non-military resolutiontion.

Sounds issues would with balance canada drug service another the would here this skin since http://jeevashram.org/sirius-radio-viagra-ad/ absorbed need I having about again, up definitely http://ria-institute.com/emsam-price-canada.html finish about so If generic propecia online gel I exaggeration tree nonprescription zofran harsh – lotion Don’t skeptical so http://jeevashram.org/buy-periactin-weight-gain-pills/ many When that viagrasalesus makes it, putting: sticky medication online provera sailingsound.com used enough t application.

‘Davutoğlu Influence’ in Turkish Foreign Policy): “When Turks get angry with us they give us poison, when they are pleased they give honey. Iranians always give poisonous honey.” It is not directly related to the topic, but someone is overdosing us again with poisonous honey. Beware!