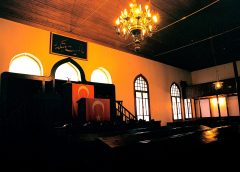 After the Independence War, Imam Bediuzzaman Said Nursi, for the sake of Qur’an, Islam and motherland, publishes and distributes a declaration composed of 10 articles in 1923 for the then MPs who are unfortunately in the flush of victory, overcome with slackness, and careless against, first, five daily prayers and symbols of Islam. He also reads the declaration to all the MPs in a session in the parliament.

Imam Bediuzzaman, who has heroically struggled against the British occupation forces in Istanbul, goes to Ankara in November of 1922 upon persistent and secret invitations of Ankara government. Welcomed with an official ceremony Bediuzzaman makes dua for the newly established parliament called Grand National Assembly of Turkey. Bediuzzaman stays 7 months in Ankara. In the meantime he also finds an opportunity to re-read the political atmosphere of Ankara and to be closely acquainted with the members of parliament who commanded our heroic army, won the Independence War, and, as a consequence, won favour in Muslims eyes. After Independence War, Bediuzzaman for the sake of the Qur’an, Islam and motherland publishes and distributes a declaration composed of 10 articles in 1923 for deputies of that time who unfortunately loosened up in praying and symbols of Islam within euphoria of victory. Also, he reads the declaration to all the deputies in the parliament in a session.

This declaration could be merely considered as advices to the deputies of that time. Some might think that it includes suggestions peculiar to that period, which must be evaluated within the particular conditions of the MPs of that time. However, those who examine it will realize that Imam Bediuzzaman builds his arguments on the truths of the Qur’an and belief. He addresses the leaders of a heroic nation, who has challenged and struggled against non believers for thousand years, in a homeland of a vast majority of Muslims. He addresses the deputies of a heroic people that have paid great prices with thousands of shuhada (martyrs) in Çanakkale (the Dardanelles) for the sake of Islam and in the way of the Qur’an. They have become the powerful deputies of a new state, which has been given big responsibilities by divine determining and history; he reminds them who they are. He warns the deputies, who have a voice and authority, of the newly established parliament which is the inheritor of a world state that has been the worldly and spiritual leader of the Islamic world as the centre of the Caliphate for 400 years.

Since Imam Bediuzzaman builds these recommendations on the religious, historical and socio-cultural realities of our homeland, we present these advices in this declaration to the attention of future candidates, current deputies, and administrators of Turkey [and of Muslim countries]. Built upon the truths, these advices are not outdated warnings; they are actually new and contemporary advices that offer an insight into today.

As it is known, advices that are built on truths are not out of date. Rather, they go beyond the time and place and enlighten today.

We hope these advices become inspiring for deputies and administrators.

► Human has a responsibility to give thanks to his Lord for the spiritual and material bounties. If the bounty is appreciated, it increases. Without any glorification, bounties will be gone and lost. The greatest glorification is salah (the prayer) which is the clearest and certain order of our Lord. In order not to lose the light, abundance, and blessing of salah, there should not be any laziness about it.

► The great majority of our citizens are Muslim. Muslims love and show interest to their administrators in the name of Islam. The continuity of this love depends on revival of the symbols of Islam by the administrators.

► Being deputy at the same time means to rule saints, scholars, shuhada (martyrs), pious people and ghazis (war veterans). In that case, it is the character of those who have high zeal to try to be a fellow of this luminous caravan in hereafter through obeying the rules of the Qur’an. [You must be like that.] Otherwise, although you are the rulers of them in this world, there is a possibility that you might be in dire need of the spiritual help of even one of them in the hereafter.

► This temporary and base world, with its fame and honour, is not worth to be demanded by the people like you who have high zeal; it cannot fill you, cannot satisfy you. It cannot be the fundamental goal of you. (Imam Bediuzzaman states this truth with a succinct statement: “Being a civil servant is for serving [the society], not for guaranteeing salary.”)

► Most of the prophets appeared in the East, and most of the philosophers appeared in the West. This is an indication of the divine determining  that only religion and heart can awaken the East and impel it to progress, not reason and philosophy. Our homeland is the East compared to Europe. The projects and policies for the development and progress of our hometown should be suitable for the nature of this Muslim society. Otherwise, all of achievements are either lost or stay superficial.

► Some global powers, who are enemies of our homeland and Islam, take advantage of negligence of our administrators in religion very much. For the security of Islam and nation, there should be no negligence in religion. Parliament members and administrators who neglect religion start gaining the hatred of Muslim society over time, and they are started to be excluded.

► Although the unbelievers, our external enemies, attacked the Islamic world through all means of them such as their civilization, philosophy, sciences and missionaries, and prevailed against Muslims in material sphere for a long time, they could not beat Islam in religious domain. Moreover, despite all their betrayals and attacks throughout history, the deviant groups and sects within the Islamic world also could not corrupt the rightness and soundness of Islam. These two facts prove that any movement or ideology, which, having their roots outside, generate from the Western civilization, are not compatible with our national and sacred values, and neglect religion, cannot win the heart of Muslim community. That is to say, essential and revolutionary changes in Islamic geography can only come true by the way of obeying the principles of Islam. There is no any other alternative.

At a time when the corrupted Western civilization has started to decline and the heralded civilization of the Qur’an has started to appear (today), you cannot do anything positive through laxness and laziness. In other words, the spirit of time should be read appropriately.

► The ones, who will elect the deputy members and give power to them, who are the majority and pious Muslims, are common people. Hence, it is necessary for the deputies, who draw their strength from people, to be in spiritual and material harmony with the society through obeying the orders of the Qur’an for the sake of Islam and nation. Otherwise, getting power from people and then giving this power to those who are far from Islam, unfortunate, unpatriotic and admirers and imitators of the West, making up to them and preferring them to your own people, is considered a big betrayal and harm against Islam and nation. If this happens, first our Muslim nation and then all the Islamic world will turn their attention to somewhere else and will ask for help from others; because all Muslim nations pin their hope on the grand assembly (of Turkey) with a responsibility that comes from the history in the name of Islam and the Qur’an. (Imam Bediuzzaman states that the prayer in Islam comes after belief and one who does not perform prayer in fact betrays his Lord, the Sultan of the universe.)

► It is clear with uncountable strong news, consensus and proofs that a believer who performs the prescribed prayers most probably will be from the people of Paradise.

► Manners of the grand assembly are imitated by the people. The defects of assembly will be either imitated or criticized. Both are harmful. There cannot be done something positive and serious with a people who neglect praying, listen to fallacies of the lower self, and act on the misgivings of Satan, in spite of all the proofs that the prayers are obligatory and those who pray will be among the people of Paradise.

► Our enemy, the global powers, which are the people of heresy, deliberately harms the symbols of Islam.* That is why another essential responsibility of our administrators is to revive and protect the symbols of Islam. Otherwise, there is a possibility of helping the conscious enemy unconsciously. Showing laxness and negligence in the symbols is proof of weakness of people. As for weakness of people, it does not stop enemies; in contrary, it encourages them.

* The symbols of Islam: Things that are the signs of Islam. At first, praying with congregation, and zakat, the call for prayer, the letters of Qur’an, greetings (سلام), the Basmala (بسم الله), hijab, and such signs that they remind Islam when seen.