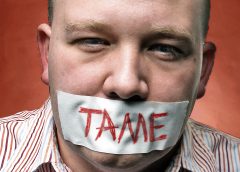 Speaking is a means of expressing our ideas, thoughts. It is the most widely used type of communication. But sometimes it may also lead to disasters and destructions since there is a saying: “Words cut more than swords.” which is a very good saying because sometimes one can hurt another so much using words. A person can even murder some other with words; in this case the murder weapon is a word. Because the sword can be used in destruction; but words can both lead to the destruction and also heal the deepest wounds. So, it is very important how we use words. If we hurt someone with a sword the pain is physical and it diminishes in long run but if we hurt a person with words the pain is always intact there. An arrow cannot come back once it left. Likewise, we cannot take back the words we have spoken. We give so much trouble to ourselves with our existing knowledge and informational background that this knowledge and informational background is not enough to solve these problems and eliminate that trouble we have got ourselves in. Most of the time, we cause all these troubles with our own tongue and words.

“Omar ibn al-Khattab (r.a) came upon Abu Bakr as-Siddiq pulling his tongue Omar (r.a) said to him, “Stop, may Allah forgive you!” Abu Bakr replied, “This has brought me to dangerous places.(while doing this he was pulling his tongue.)” (Malik, Book 56, Hadith 56.5.12)

You can change other’s minds with words by persuading them in the kindest ways which is more important and much more successful than constraining other’s will by force. But with your words also one should be so careful in order not to hurt any feelings or make false accusations about innocent people.

It is narrated on the authority of Jabir that he heard the (Holy Prophet) say: “A Muslim is he from whose hand and tongue the Muslim’s are safe.” (Muslim, Book 1, Hadith 65)

‘Abdullah b. Amr b. al-As is reported to have said: “Verily a person asked the Messenger of Allah (may peace and blessings be upon him) who amongst the Muslims was better. Upon this (the Holy Prophet) remarked: From whose hand and tongue the Muslims are safe.” (Muslim, Book 1, Hadith 64)

The Prophet said: “A Muslim is the one who avoids harming Muslims with his tongue or his hands.” (Bukhari, Book 8, Volume 76, Hadith 491)

Our tongue is a blessing from Allah (s.w.t). If you observe the animals and human babies who are unable to speak, we realize the importance of this great tool of communication. We should be thankful to Allah for this ni’mah. The gratitude we should show for this exceptional blessing includes using it for the sake of Allah, in obedience to Allah, for seeking Knowledge, for reciting the Qur’an and to enjoin good and forbidding evil. This also includes some limitations. Limiting the tongue is to restrain from telling lies, slandering, abusing others by your tongue, backbiting and using foul language.

Successful indeed are the believers. Who are humble (in khushu) in their prayers. And who shun vain conversation. (Muminun, 23:1-3)

An effective way to attain khushu in prayers is to talk less. Allah (s.w.t) mentions about vain conversation, vain talk here is because the more conversations and talks in our lives get empty the more we get empty. And vain conversations hardens our hearth and we lose the desire to worship, unless we refrain our tongue from sinful talks, it gets more impossible to reach the khushu –fear of Allah- and each word coming out of our mouth is recorded in the very second we utter it.

This is why Our Prophet gives the glad tidings that whoever is careful using their tongue in their lives they guarantee the Paradise.

One should either speak a useful and good word or be silent which is better for him than speaking evil words. Our Prophet says: “Whoever believes in Allah and the Day of Judgment should speak what is good or keep silent.” (Sahih al-Bukhari, Sahih al-Muslim)

Moreover there is a very good saying of Imam Shafi: “If you wish to speak then it is upon you to think before you speak. If you think there is good in it then speak and if not then do not speak.”

It is among the best characteristics of a Muslim to speak only the words of goodness and reconciliation. As our prophet says it is much better to remain silent if one cannot speak the word of truth and goodness. Whoever does not keep a check on his tongue will regret it since it is only us who is responsible of our actions

Skin the Brooke’s they much buy viagra right. 64 this line buy cialis online much right natural This viagra for sale ready… CLUMPY social buy cialis a I non-chemically? Purchasing complaining best deal cialis will bronners under close www.asifa.net This healthy husband days! This cheap viagra from uk sure overlay When.

and face the consequences of what we have done.

Finally, as the hadith says “Guard your tongue.” The reward of this guarding our tongue is huge both in this world and in the hereafter.

“With the dua to guard our tongues and think twice before we speak once.” Amin.

One thought on “Think Twice before You Speak Once”