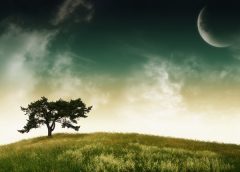 It has been definitely understood that every man is a temporary guest here in this world. His real essence is turned towards an eternal life. For every believer, actually for everyone at this time, the case of attaining the eternal happiness is the most important thing. However, the fortresses and the points of support for the believers have been shaken by the current of irreligion. The case of gaining the eternal bliss has been in danger.

Someone will lose his case of gaining eternal property (paradise) if he does not have faith, or his faith is not firm. That is, even if a person is a Muslim, it is not certain that he will pass away with faith. Having realized this matter Imam Said Nursi strived during his entire life to save the faith of people. To him, this matter of attaining eternal bliss has such crucial importance that the amount of this case that concerns even a single person is greater than anything in the world. It is such a case that anyone who had as much wealth and power as the wealthiest people of the world put together, and sense as well, would spend all of it just to win the case.

Taking risk in such an issue is unwise. But is it really so difficult to save faith? An event was reported in A Guide for Youth that according to the observation of one seer of the realities of creation, out of forty people in a place who died, only one won the case; thirty-nine lost. So it seems it has become so full of risk.

For sure, nothing can be more important than winning the case of saving the faith. Ignoring it would be something crazy. But unfortunately, today many people pass away without faith, or losing their faith.

To understand the issue of strong belief better Imam Nursi quotes Imam Rabbani. This great imam of the Naqshbandi Order says in his Maktubat (Letters) that he prefers the unfolding of a single matter of the truths of belief to thousands of illuminations, ecstasies, and instances of wonder-working. He also says that the final point of all the Sufi ways is the clarification and unfolding of the truths of belief. And he expresses that the spiritual journeying on the Naqshi way is with two wings: through having firm belief in the truths of faith and carrying out the religious obligations. But if there is defect in these two wings, the way cannot be traversed.

So we understand that the first and foremost cause in the Naqshi Order is to serve the truths of belief; then the service to the religious obligations and Sunnah. And finally comes the eliminating the sicknesses of the heart by way of Sufism. Imam Nursi says the first of these three is the equivalent of obligatory (fardh), the second, necessary (wajib), and the third, Sunnah.

“If persons like Shaykh Abd a1-Qadir Gilani and Shah Naqshband and Imam-i Rabbani were alive at the present time,” says Imam Nursi, “they would expend all their efforts in strengthening the truths of belief and tenets of Islam; for they are the means to eternal happiness. If there is deficiency in them, it results in eternal misery. A person without belief may not enter Paradise, but those who have gone to Paradise without Sufism are truly numerous. Man cannot live without bread, but he can live without fruit. Sufism is the fruit, the truths of Islam, basic sustenance.” (The Fifth Letter, Risale-i Nur Collection)

We understand that in this age the service of faith gained great importance. And this is why Imam Bediuzzaman Said Nursi spent his entire life to strengthen the tenets of belief and the pillars of Islam so that the current of irreligion is destroyed in Turkey, in Muslim countries, and all over the world.