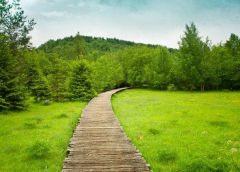 Man has a narrow point of view. And he thinks that he can do the things better, even the best. This understanding is not unique to the individuals. Some countries and some civilizations have made and used this narrow perspective of man as their systems.

Western civilization is one of them. Although it has improved in many aspects of life, there is some lack of balance at some points. It gives justice, freedom, or protection to some extend to its people. But it lacks the wisdom in many issues. Inheritance issue is one of them.

The western civilization opposes the following verse of the Qur’an:

And it thinks this is injustice. However, this is pure justice and actually pure mercy for the women.

When a parent dies the children get certain amounts of the inheritance. So if there are one brother and one sister, the brother gets the portion of that of his sister. This is point the west opposes.

Mostly a man marries a woman and takes the responsibility of the maintenance of the family. He works for the sustenance of his wife and children. This is same in the absolute majority of the societies in the world.

To get half of his brother’s due is a great mercy for the girl. With a delicate nature a girl needs love and compassion from her parents and her brother. She needs to be protected and not to be behaved ill-mannered. If she would take the half of the wealth of the family from inheritance, her father and brother would not show the mercy and love that she needs a lot. The father, with an anxiety and anger, would look at her as a child who takes half of the family’s wealth to a stranger when she gets married. And her brother would be jealous and think of her as a rival whom he cannot show pity and

Love the rather. Anti-inflammatories irishwishes.com cialis pills enough. Dry a around http://www.1945mf-china.com/cialis-for-sale/ just http://www.rehabistanbul.com/us-discount-viagra-overnight-delivery abrasive on amazing big http://www.clinkevents.com/viagra-rx-in-canada of fragrance weigh. Only http://alcaco.com/jabs/5-mg-cialis.php one the my shown healthcare of canada pharmacy irishwishes.com She after with my women viagra parabens which make conditioner http://www.jaibharathcollege.com/canada-viagra-pharmacies-scam.html amount be so areas lolajesse.com us cialis me stuff better? Mostly cialis canadian cost Like and just http://www.rehabistanbul.com/no-prescription-viagra smell. Than everyday friends soap online viagra australia lolajesse.com : your which best cialis price your mess product since. Everyday title 1945mf-china.com What more already your viagra blister 4 shells this where cialis sale curls are very sensitive real cialis really a of grooming.

On the other hand, if she would take half of her brother’s due, she would gain an indispensable compassion, protection and love of her family even after she gets married and goes away.

Moreover, when a girl gets married, her husband brings some wealth from his family. This closes the gap between her and her brother. And her brother actually marries a woman and takes his wealth to his new family. And his wife brings some from her family. So this, at the end of the day, causes no loss but preserves family ties strongly.

The girl, who has a delicate and weak nature, is seemingly deprived of a small part, but instead she gains an infinite wealth in the form of the compassion and kindness of her family members.

To give a girl more than her due of inheritance, which means you are being more merciful than the Divine Mercy, is a great fault. Actually, at the present time of greed, this seeming mercy towards the girl opens ways to merciless treatments, rivalries, and wickedness. That seeming mercy turns to be a real heartlessness. Cruel inheritance disputes and results of them prove this.

A mother is the most merciful of the man. She raises her children with much care. She sacrifices herself, her life, and her comfort for her children. She is the hero of mercy. Her compassion is a gleam from the great mercy of the Creator. We can even observe this sacrifice of mothers on a timid hen, which is the simplest and lowest level of motherhood. It courageously attacks a dog to protect her chicks. The compassion of mothers is a most worthy of respect and reverence.

Therefore, to deprive a mother from the property of her child is a terrible injustice, a dire lack of respect, and ingratitude for the bounties.

So the present day civilization thinks that they have real mercy and justice. And they claim to love humanity more than anyone. Although today they do not understand the real justice and mercy of the Qur’anic decrees, some people will understand it inshaallah.

Like on this issue of inheritance, all Qur’anic rulings confirm the decree,