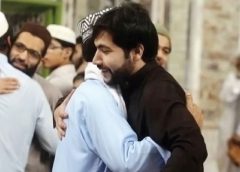 It is our responsibility to know the spiritual bonds that can bind Muslims to each other for the unity of Islam.

One hundred years ago, one young man delivered a speech in historic Umayyad Mosque to a gathering of close to ten thousand, including one hundred scholars. With his extraordinary speech, this charismatic and brilliant young man mentioned six sicknesses of the Islamic world.

One of the sicknesses according to this young man is disunity among Muslims, which is our greatest problem at present. We are a very fragmented and divided people today. We are divided and disunited at many levels: within our community at local level, first, then at national and international levels.

In that speech, which is called the Damascus Sermon, Imam Bediuzzaman Said Nursi, a mujaddid (reviver) of faith, who devoted his entire life to communicate the message of Qur’an and call people to live by the morality of Islam, told us what the problems are that we must solve to establish the unity of Islam.

According to Imam Said Nursi, one of the most important reasons of this disunity among Muslims is lack of awareness of the luminous bonds that bind the believers to one another.

This rope in the verse makes us realize the bonds between our brothers in Islam. What are the luminous and spiritual bonds that can bind Muslims to each other? I would like to share with you these luminous bonds between Muslims and how they unite us in the light of Imam Nursi’s ideas.

Imam Said Nursi said, “Love is the cause of the universe’s existence, and what binds it; and it is both the light of the universe and its life.” The following verse from the Qur’an helps us to understand this:

“And if your Lord had willed, He could have made mankind one community; but they will not cease to differ. Except whom your Lord has given mercy, and for that He created them…” (Hud, 11:118-119)

From this ayah, it is clear that Allah created human beings and this universe out of mercy and for mercy; and since Divine Mercy is inseparable from Divine love, this means that the universe and human beings were created out of love and for love as well.

As the above hadith says, a person cannot be considered to be a true believer until he loves for others what he loves for himself. Indeed, in another hadith Prophet Muhammad (peace and blessings be upon him) said:

“Love for the people what you love for yourself and you will be a believer.” (Ibn Majah)

These hadiths are stern warnings against enmity, hatred and envy.

Enmity, hatred, and envy just go against what the two hadiths tell us. As Imam Nursi said, “We are the devotees of love; we do not have time for enmity or hatred.” He also added: “The thing most worthy of love is love, and the quality most deserving of enmity is enmity. That is, the quality of love and loving, which renders man’s social life secure and impels to happiness is the most worthy of love and being loved. Enmity and hostility are ugly and damaging qualities, which have overturned man’s social life and more than anything deserve loathing and enmity, and to be shunned.”

It is obvious that love and enmity are opposites, just like light and darkness; they cannot be combined. Enmity and hostility towards a Mu’min is tyranny.

The love bond is so strong that it can bind the entire beings in the universe to each other with spiritual ties. The bond of love also unites the hearts of believers.

Iman binds the believer to the One. Iman makes the man a servant of Allah and obedient to His commands. In the same way, that bond of iman must unite and bind together the hearts of the believers who are the servants of Allah.

Regarding this subject Imam Bediuzzaman Said Nursi said the following:

“You cannot deny that if you find yourself in the same regiment as someone, you will form a friendly attachment to him; a brotherly relation will come into being as a result of your both being submitted to the orders of a single commander. You will similarly experience a fraternal relation through living in the same town with someone.

“Now there are ties of unity, bonds of union, and relations of fraternity of numerous as the Divine Names that are shown and demonstrated to you by the light and consciousness of belief.

We are coming from different countries to join this forum. There are participants from the west, from the Far East, from the south, and from the north. I am coming from south East Asia, Malaysia; there are our friends here coming from the United States, Brazil, Netherland, Sudan, Senegal, Iraq, Lebanon, Bangladesh, and other countries. Yet we are making sujud towards one and same direction, Kaaba. We share one Allah, one prophet, one Qur’an, and hundreds and thousands of things.

Imam Said Nursi explained with an analogy how cruel and unwise it is to have hatred and hostility towards a brother in Islam just because of his one small bad deed; but in the same time he actually has ten good deeds like iman and Islam (being a believer and Muslim):

“If you were to say that ordinary little pebbles were more valuable than the Kaaba and greater than Mount Uhud, it would be a ridiculous statement. So too, belief, which has the value of the Kaaba, and Islam which has the splendour of Mount Uhud, as well as other Islamic attributes, demand love and concord; but if you prefer to belief and Islam certain shortcomings which arouse hostility, but in reality are like the little pebbles, you too will be engaging in great injustice, foolishness and sin!”

Our beloved prophet Muhammad (peace and blessings be upon him) compared the believers to the members of a body. It is such a body that members love and protect each other, are merciful to one another, and come to help each other.

“The example of the believers in their affection, mercy and compassion for each other is that of a body. When any limb aches, the whole body reacts with sleeplessness and fever.” (Bukhari)

Yes, just as the pain of one Muslim affects the other conscious Muslims.

So it should be taken seriously.

Allah also tells us in the Quran how important this brotherhood between the believers is.

‘And hold fast all together to the rope of Allah and never be divided. And remember the favour of Allah that was bestowed upon you: how you were enemies, and how He united your hearts, so that by His favour you became brothers; and how He saved you from Pit of Fire when you were on the brink of it. And so Allah makes plain to you His serves, in order that you will be guided’. (Al ‘Imran, 3:103)

Allah (swt) then informs us that this unity and brotherhood is what saved us from the brink of falling into the fire! Therefore, doing the contrary, which is to be disunited, to hate each other, to be divided into groups, and to lack the sense of brotherhood amongst ourselves, will cause us to fall into the fire. May Allah (swt) save us and all the believers from it.

Yes, this bond of brotherhood is beyond the ties of race and tribe. When we look at the Muslims at Mecca during Hajj, we see such a beautiful example of brotherhood that spans many races, tribes and languages.

“The foundation and spirit of our true nationhood is Islam. Through the bond of this sacred nationhood, all the people of Islam are like a single tribe. Like the members of a tribe, the groups of Islam are bound and connected to one another through Islamic brotherhood. They assist one another morally and materially.”

What ruthlessness and ignorance it is to sever these luminous and spiritual bonds that tie us. These bonds will keep us together forever. How unreasonable it is to break this connection of unity of the entire ummah just because of the partiality of politics, obstinate rivalry, or negative nationalism and racism, is it not?

Love, brotherhood and affection are the character of Islam. The people of enmity resemble a spoilt child who wants to cry, and so looks for an excuse to do so, and something as insignificant as a fly’s wing become pretext. And they resemble an unfair, pessimistic person who so long as it is possible to distrust, never thinks favourably. He covers ten good deeds with one bad deed. Fairness and favourable thinking, which mark the Islamic character, reject this.

I would like to finish with a few lines from Mawlana Jalaluddin Rumi:

“To speak the same language is kinship and affinity:

When you’re with those in whom you can’t confide,

Many Indians and Turks speak the same tongue;

Yet many pairs of Turks find they are foreigners.

The tongue of mutual understanding is quite special:

To be one of heart is better than to have common tongue.”