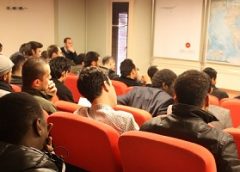 As a result of opening its doors to outside much more every year that goes by and its initiatives abroad in every field Turkey has become a centre of attraction for students from a variety of countries as well as it becomes for members of different kind of professions.
Turkey which is gaining the most comprehensive momentum of history of republic with its planning of basic education reform and opening of nearly two hundred universities is desired to reach a level in coming years proportional to its attraction and historic significance in terms of extramural students both in quality and number and the service to be offered.
Today, Turkey has 26.200 international extramural students from 147 countries. 8 thousand of them from 96 countries continue their education in Istanbul. It is targeted that the number of the extramural students in Turkey to exceed 100 thousand and to get 3 billion dollars economically. The international market of extramural students is 110 billion dollars.
According to UNESCO’s data 3.1 million students continue their education abroad and this number is expected to rise 7 million in 2020. USA (690 thousand), UK (340 thousand) and Australia (280 thousand) take the lead in the market. The number of the extramural students in France and Germany is 250 thousand for each country. Malaysia, China and Singapore have got 12 per cent of the international extramural students market. The number of Chinese students who study abroad is 500 thousand. 340 thousand students continue their education in any university in the UK with distance education system without leaving their country. This is another aspect of the issue.
Turkey is almost at the same level with Sudan and Czech Republic in this area; that is, at the beginning level.

Although we are at the beginning level there is a remarkable dynamism in Turkey on the issues such as legislation which will facilitate the adaptation of the extramural students whether in official or civil level, removal of infrastructure shortcomings and increasing of opportunities of scholarship, etc. For example, the Presidency for Turks Abroad and Related Communities which was established two years ago has appointed a head of department for the extramural students. Diyanet Foundation has increased its activities as parallel to its shift of perspective in this area.
What is pleasing is the steadfastness of awareness of the officials on this issue rather than the development of the technical opportunities. The following statement of Omer Dincer, the Minister of Education, which he made in a student gathering organized in Ankara last February indicates the appropriate perspective on the issue: “We, together, have a bond of love and heart which was weaved by hundred years of common history. We are remarkably distinguished from the countries which consider the extramural students as a way of economic gaining and ignore the human aspect of the education.”
The more important point for Turkey on this issue is the presence of NGOs which are experienced and have such an appropriate perception and their gradual development. Even, the change of the term ‘foreign students’ used for the extramural students in Turkish into ‘guest students’ shows the change of mentality on this issue. The Bab-i Alem International Students Association chaired by M. Ali Bolat which led the way in this issue causes a new development in Turkey by sharing its experiences and secrets of its success with similar institutions and it pioneers the establishment of the International Platform of Guest Students.
Alongside their different activities lots of the well-established civil institutions in Turkey give service to the extramural students. Because of the sensitivity and importance of this issue, the institutions which were established only to give service in this field are products of the new era.