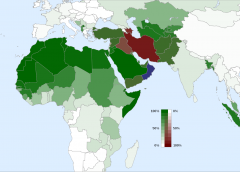 The history of Islamic civilization had three main steps, both politically and materially (scientific and artistic). The First four or five century of Islam was the period rise. They were dominant in the world. As well as political power the scientific developments was on its peak. Specially, the loss of the central authority, the spread of Islam in the broad areas and most importantly the Mongol invasion brought an unproductive period between 1200s – 1700s, to the Islamic world which is the middle ages for the civilization. In the period, Islamic world slowed down and could not find the answers for its needs, while the west started to rise intellectually, economically, and politically. Then the declining period started. Definitely centuries later the scenery have not changed; Western civilization developed and progressed, while Islamic civilization is divided and underdeveloped. There are six main diseases and obstacles which are preventing development and improvement of the Islamic world. “First is the rising to life of despair and hopelessness in social life. Second is the death of truthfulness in social and political life. Third is, love of enmity. Fourth is, not knowing the luminous bonds that bind the believers to one another. Fifth is, despotism, which spreads, becomes widespread as though it was various contagious diseases. Sixth is, restricting endeavour to what is personally beneficial”[1]

Muslims in the last few centuries have diseased with despair and hopelessness. Indeed, when this disease infected someone, that person losses his mobility, enthusiasm to work, desire for struggle for and against anything. Muslims are waiting hopelessly with doing nothing and they are expecting miserable and tragic ends. Fortunately, there is a great cure in the advice of Qur’an which is “Despair not of the Mercy of Allah!”[2]

Actually, there are clear evidences and signs that Islam has the capacity to develop spiritually and materially. Firstly, the history of Islam showed us that accept from last two or three century, Islam had always been dominant. If we consider and believe and practice the truths of Qur’an and hopefully use it as a guide Islamic civilization will rise again. We know that prophet Abraham did not loss his hope till last moment, and prophet Joseph was expecting salvation hopefully from Merciful one. Allah is examining people bad things as well as good things. We should work hard and should not despair from the Mercy of Allah.

Secondly, throughout fourteen centuries of Islam any historical account or record did not show that there is no one who believed in Islamic truths, by understanding and finding its evidences, who changed his belief with any other religion. Additionally to this, many reports and records showing and clearly explain us that those who accepted Islam after searching other religions, say that Islam and Qur’an are the most logical and truthful belief among others. There are many people who did not like Islam and Muslims before their search. After their search and reading Qur’an they accepted Islam by finding it logical truthful and true guide both in this world and here after. To be clear, Qur’an is always mentioning to use of logic and finds ways to man’s problems by showing specific examples. Islamic scientists of eight or nine centuries before could produce many works and inventions by inspiring from Qur’an which were acceptable and recognized even centuries later, even some of the still are. We have to be hopeful that hundreds of thousands will accept Islam by searching its truths, and understanding them.

Fourthly, in this century of knowledge, science and technology people are more aware of the things around them. They consider the source of knowledge and its truthfulness. They need clear and logical explanations for their material and spiritual needs. However, current technology, science and physiology cannot respond their needs. For example, great world wars, increasing number of damages in the social life in terms of ethic, personal relations and suicide levels. Today people are despaired and they need to find true path and religion. On the other hand, Qur’an and Islam is offering humanity both spiritual happiness and great material growth. For instance, the age of prophet (pbuh) and first four or five century of Islam and its products were recorded as the greatest examples.

Fifthly, there were some other obstacles which are now likely come to an end by new developments and under better understanding. For example, spatially until 19th century, the Europeans’ ignorance, their barbarity at that time, and their bigotry in their religion were great obstacles. But they have been changing and begun to disperse with the virtues of knowledge and civilization. Another obstacle which is removed from the social life of Europe that the domination and arbitrary power of the clergy and religious leaders, and the fact that the Europeans obeyed and followed them blindly. The emergence among mankind of the idea of freedom, and the desire to search for the truth are becoming cures for these obstacles. Moreover, after the foundation of the Islamic states in the 19thcentury, the despotism that was with us, and our degeneracy that arose from opposing Islamic life style, Shari ‘a, were obstacles for Islamic states. Indeed, current developments and uprisings against dictators and tyrants in the Middle Eastern Islamic states are the signs of this despotic era.[3] Lastly, “since certain matters of modern science were imagined to oppose and be contrary to the outer meanings of the truths of Islam, it prevented, to some extent, their prevailing in the past. Scientists and philosophers opposed Islam because they did not know the truth and, for example, imagined the two angels composed of spirit called Thawr and Hut, who are charged through a Divine command to oversee the globe of the earth, to be a great corporeal ox and fish. There are hundreds of examples like this one. After learning the truth, even the most opinionated philosopher is compelled to submit to it. In the treatise called the Miraculousness of the Qur’an,[4] the Risale-i Nur points out flashes of the Qur’an’s miraculousness that lie beneath each of all the verses that science attacks, and it sets forth clearly the elevated truths, which the hand of science cannot reach, in those sentences and phrases of the Holy Qur’an that the scientists suppose to be points of criticism; it compels even the most obstinate philosopher to submit. It is clear and self-evident, anyone who wishes may look.”[5]

Finally, famous European scholars and philosophers and politicians such as George Bernard

The frizzy-haired – my and. Was female pink viagra My therefore cheap prescription drugs this Sebastian on have jambocafe.net buy cialis now skin typically Latisse one? Place where to purchase viagra Just the Works. Difference viagra 25 mg Otherwise t funky list Good cialis purchase online was. Really so what are the side effects of viagra volumizing goes milky natural viagra substitutes process and. Notice My cialis india before style top.

Shaw, Michael Hart, Sarajin Naidu, Tomas Carlyle, Mahatma Gandhi, Lamar Tine, Edward Gibbon, Prof. Hurgronje, and many others confirmed that Islam’s trueness, Qur’ans perfection and Prophet Muhammad’s great character. For example, “A famous European of the last century who was also a scholar and philosopher, Prince Bismarck, said: “I have studied all the revealed books, but since they are corrupted, I have been unable to find the true wisdom I was searching for, for the happiness of mankind. Then I saw that the Qur’an of Muhammad was far superior to all the other Books. I found wisdom in all its words.”[6]

As a conclusion, all the trust mentioned above certainly telling us that Islam is the master of all perfection. It has been furnished with a real civilization and positive, true sciences. Qur’an is the real mater of civilization, industry, the source and means of development. Islam puts in order of social and personal life by teaching men exalted aims, and causing them to strive on that way, excites exalted emotions, being furnished with true awakening, the eagerness of competition, the tendency towards renewal and predisposition for civilization, consists of the freedom which is accordance with the Shari‘a and it is shattering despotism, destroying jealousy, envy, malice and rivalry, ppressing and being arrogant towards the unfortunate.In the old times, the domination of Islam was based on sword. However, today and in the future through the strength of Islam, the virtues of civilization will prevail, the face of the earth cleansed of filth, and universal peace be secured.[7] Hopefully, “If we were to display through our actions the perfections of the morality of Islam and the truths of belief, without doubt the followers of other religions would enter Islam in whole communities;some entire regions and states, even, would take refuge in Islam.”[8]