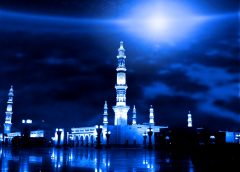 We find nowadays publications filled with lies and deception which mislead many Muslims into thinking negatively about the honorable Mawlid of the Prophet. These publications claim that to celebrate the Mawlid is an act of innovation that goes against Islam. This is far from the truth, and it is therefore necessary for those who can speak clearly to help clarify and reverse the doubts surrounding this most blessed day. It is with this humble intention that I present the following proofs in support of celebrating our beloved Prophet’s birthday.
The Prophet said, “He who innovates something in this matter of ours that is not of it will have it rejected.” He also said, “Beware of innovations, for every innovation (kul bida`) is misguidance.”
Those opposed to Mawlid cite this saying and hold that the word every (kul) is a term of generalization, including all types of innovations, with no exception, and that therefore, celebrating Mawlid is misguidance. By daring to say that, they accuse the scholars of Islam of innovation. At the top of the list of those they have accused, then, is our Master `Umar (r). Those in opposition to Mawlid quickly reply to this, “But we did not mean the Companions of the Prophet Muhammad.”
It follows, then, that the meaning of every (kul) cannot be taken in its general sense. Therefore, although the Prophet may not have said to celebrate his blessed birthday, it is nonetheless not innovation to do so. For, as the following examples show, there were many actions and practices instituted by his close followers after his time that are not deemed innovation.

(From a Prophetic saying related by Zaid Ibn Thabit.(r)) “The Prophet died and the Qu’ran had not been compiled anywhere. `Umar (r) suggested to Abu Bakr (r) to compile the Qu’ran in one book. When a large number of Companions were killed in the battle of Yamama, Abu Bakr wondered, “How could we do something that the Prophet did not do?’ `Umar said, “By Allah, it is good.’ `Umar persisted in asking Abu Bakr until Allah expanded his chest for it (Allah made him agree and accept these suggestions) and he sent for Zaid Ibn Thabit and assigned him to compile the Qu’ran.” Zaid said, “By Allah if they had asked me to move a mountain, it would not have been more difficult than to compile the Qur’an.” He also said, “How could you do something that the Prophet did not do?” Abu Bakr said, “It is good, and `Umar kept coming back to me until Allah expanded my chest for the matter.” The saying is narrated in Sahih Al Bukhari.

The Maqam of Ibrahim (as) in relation to the Ka’ba

(Al Bayhaqi narrated with a strong chain of narrators from Aisha.) “The Maqam during the time of the Prophet and Abu Bakr was attached to the House, then `Umar moved it back.” Al Hafiz Ibn Hajar said in Al Fath, “The Companions did not oppose `Umar, neither did those who came after them, thus it became unanimous agreement.” He was the first to build the enclosure (maqsura) on it, which still exists today.

Adding the first call to prayer on Friday

(From Sahih Al Bukhari, from Al Sa’ib bin Yazid.) “During the time of the Prophet (s), Abu Bakr (r) and `Umar (r), the call to Friday prayer used to occur when the Imam sat on the pulpit. When it was Othman’s (r) time, he added the third call (considered third in relation to the first adhan and the iqama. But it is named first because it proceeds the call to the Friday prayer.)”

The salutations have been mentioned by Sa’id bin Mansoor and Ibn Jareer in Tahzeeb al Aathar, and by Ibn Abi Assim and Ya’qoob bin Shaiba in Akhbar `Ali and by Al Tabarani and others from Salamah Al Kindi.

The addition to the tashahhud by Ibn Mas’ud

After “wa rahmatullahi wa barakatu,” and the Mercy of Allah and Blessings, he used to say, “assalamu `alayna min Rabbina,” peace upon us from our Lord. Narrated by Al Tabarani in Al Kabir, and the narrators are those of the sound transmitters, as it has been mentioned in Majma’ Al Zawa’id.

The addition to the tashahhud by Abdullah Ibn `Umar

He added the basmalah at the beginning of the tashahhud. He also added to the talbia, “labbaika wa sa’daika wal khayru bi yadayka wal raghba’u ilayika wal `amalu” This is mentioned in Bukhari, Muslim, et al.
These are some of the developments instituted by the Prophet’s Companions, the scholars, and the honorable members of his nation, which did not exist during the time of the Prophet, and which they deemed good. Are they, then, misguided and guilty of bad innovation?
As for the claim that there is no such thing in religion as good innovation, here are some sayings of the brilliant scholars of Islam belying this claim.