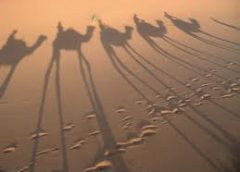 If we have all the sources of Islam correctly and can live by the Islam without hesitation and doubts in our hearts today, that is because the sahabas (companions) of prophet Muhammad (PBUH) fulfilled their duty of transferring Islam to today and to us in an unprecedented successful manner. The prophet (PBUH) said about his sahabas: “My companions are like stars. You are guided (to Allah) whomever you obey.”

One of those stars was Mus’ab ibn Umair (may Allah bless him). He was the first teacher of Islam. The prophet sent him to Madina to teach Islam to inhabitants of Madina. Mus’ab was a member of Banu Abd al-Dar, an aristocratic and rich family of the Quraish. He was young, charming and wealthy. All the bounties of world were laid before him. However his heart was so huge that these ephemeral objects of world did not satisfy him. After getting know the prophet and adopting belief of Allah he set off for teaching Islam to the other people. Mus’ab ibn Umair was martyred in the Battle of Uhud and there was no enough tissue to cover his blessed body that day. Mus’ab was a devoted life to Islam. He is today inspiring for all Muslim youth to take Islam far and away.

Another heroic sahaba was Abd Allah ibn Abbas (may Allah bless him). He was cousin of prophet and while the prophet was alive he was so close to him. Ibn Abbas was honoured to receive the following prayer of the prophet “O Allah! Teach him (the knowledge of) the Book”. Due to the blessing of this prayer Ibn Abbas became a competent pundit of exegesis of Qur’an and Sunnah. He was revered by all Muslims especially by the great companions. Ibn Abbas educated and trained many Muslim scholars and this second generation of Muslims served Islam very diligently.

Although they were the members of a backward society in all terms, they got a degree to govern most civilized societies of then. The companions who were educated by the prophet became the teachers and governors of the cities which were governed by Romans, Persians and Egyptians previously. How could it be possible that some guys, who were uneducated, not even in the lowest degree, could manage and administer and teach the most civilized societies of the world? A good answer to this question may be found in the risalas of Imam Bediuzzaman Said Nursi: “The conversation of the Prophet is such an elixir that someone who experiences it for one minute receives lights of reality equivalent to years of spiritual voyaging. For in conversation there is reflection and a being coloured. It is well-known that through reflection and following and imitating, and through the Sublime Light of Prophethood, a most high level may be reached. (27. Word)” Thus, by this level they became teachers of civilized nations.

What we need to do today is to remember and mention these sahabas with gratefulness because of their service to Islam, let alone that they were friends of the prophet Muhammad (PBUH).  I want to end my article with the invocation of Mevlana Jami which is repeated also by Nursi. The invocation is thus: O Prophet of Allah! If only like the dog of the Companions in the Cave, I could be in Paradise among your Companions. Is it right that their dog is in Paradise while I am in Hell? He was the dog of the Companions of the Cave; I am the dog of your Companions.