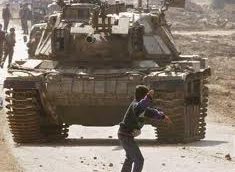 The adventure of the stone had started when Cain took up it and hit Abel. Then, it has had a place among our musts in life. Sometimes it has built up the foundations of our houses, sometimes it has become the most patient guardant of our graves. At times, we have grinned and borne anything thanks to it, and at times we have fastened it onto our abdomens to suppress our feel of hunger. Until it becomes an object of protest in innocent small hands of children…

In the past, our ancestors wrested their living from the soil and stone. Through stone, our biggest sin had been committed. For centuries, in the world of humanity, Stone had a role as an object of polytheism. It became a symbol of rebellion against the unwanted. Stone, as the symbol of weakness against rockets. Children began meeting with stone at streets, for the first time. We had five stones with which we juggled. Also, we had nine stones which we used to play, putting one stone onto another one and knocking them over with a ball.

I am a little child, Oh people! You are the ones who made me meet with stone. You made me the child of streets in the streets of children. Supposedly, by giving stone to my hand, you modernized me, the innocent child of metropolis which has been also modernized, being filled with stones and concretes. While you introduce me the stones with which you constructed your past, you deconstruct “me”, who would construct your future.

Yesterday, I was in Ta’if. The messenger of Allah, our Prophet (PBUH) honored our hometown. My heart, full of little emotions, started to beat rapidly with the delight of seeing Him. However, my older people told him “Get out of our hometown, go wherever you will! After your people and townsmen rejected what you declared, you have come here! We swear to god, we are going to stay away from you as much as we can and we won’t accept your requests!

My heart was broken. There was something hurting in me. But, unfortunately, my people in chief uttered those words recklessly. As if it was not enough, they asked me to throw stone to that great prophet with my little sinless hands. It was not me, Oh Allah. I was the sin of my people, my Lord. I was the dirt of past. That Glorious Person must have been so hopeful for gleam from future that he was praying as “Oh Lord, get the children of this country and meet them with your mercy”…

Since Yesterday and today, I have been in Palestine. The marbles which are played as toys in your country are in the shape of bomb here and I am the child which has been grown up with musket bomb rains. Stone is again my fate. Faith in my chest, stone in my hand and I am the child on the bosom of streets. Indeed, my stones are not like yours. Like the dust The Prophet threw towards the infidels, my stones are the ones that are thrown, with the faith in my heart, to the civilized world of missiles.

“O Allah who is the most merciful among all the merciful! You are the only Lord of the helpless who are despised by many people. My Lord is also Thou. You have such a mercy that you do not let me fall in the hands of bad-tempered and wicked enemies.” This prayer of our Master (p.b.u.h.) is also mine and salvation is possible only with Faith. I am Palestinian child throwing stone; forgive my older people, O My Lord!

I am the child of the town called as “the Caliphate” and today, just here I am in your streets. And I, who am looking forward to being the student of the information age, am –unfortunately- holding the same stone. To you, is it important towards whom I will throw the stone? Or is the important question whether that I who, indeed, belongs to you throw stone is a shame?

I am just an innocent child who has been brought up by my older people who are not able to like each other in a way, and brought up with the internet and computer houses where my friends play war games and with your televisions imposing violence and brutality. I am just made up of your reflections, oh my older people. I am your little pretty child and your imitator.

The worldly life of which you are supposed to beware in the Qur’an is now really just a game for me. I am a child regarding everything as a game and an actor playing my role without questioning. I am you, Oh my mummy, my daddy! I am you, Oh my judge, my attorney! I am you, Oh my teacher, my brother!

Oh people! Don’t ignore me as I am just a stone and please listen to me now. I am not only the foundation stone of your physical body but I am the indicator of your civilization as well. You cover your roads with me. You build your buildings with me. The most precious present for your friend is a stone. And your object of defense against your enemies is also me.

Seeing that the stone and the child have announced their innocence and stepped aside, it is up to us to think over, in my opinion. Remember that our children are our future. Future will be woven on the workbench of Islamic civilization. Any thought or any person that is away from such an understanding is destined to stay behind the times. If we want to build a beautiful future, we are to bring up our children according to Islamic principles.

I ask as a favor to care about firstly ourselves then our children to build our future together, pleading the following prayer of our Prophet (PBUH) to be remedy for our problems that we have brought up and we are facing now. The prophet invoked this prayer while he was coming from Ta’if.

“My Allah! You are the only one whom I tell about and complain for I have no strength and I become helpless and people despised me. O Allah! As long as I will not fall victim to your wrath, I can tolerate anything. But your forgiveness and remission is so vast that you will not let me do these. My Allah! Until you are pleased, I beg for your pardon. O Allah! Any strength, any power is only existent with you.”