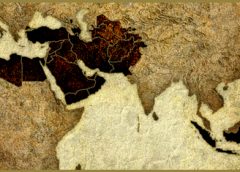 And hold firmly to the rope of Allah all together and do not become divided. (Al-Imran, 3:103)

Europe has a history full of bloodshed because of the wars between religions, sects, and nations. There had always been wars between nations. Hundred Years’ Wars between French and English in the 14th and 15th centuries and Thirty Years’ War between 1618 and 1648 are very well-known. (30,000 Protestants were massacred in one night of St. Bartholomew’s Day massacre in 1572.) And the two World Wars which caused millions of people’s death in the 20th century erupted between the European states. The Jews fell victim to massacres for centuries in Europe.

But today it seems that all those wars have already been forgotten. The European having fought for hundreds of years established the European Union and became a world power. There is not any problem between the Christian sects today. Moreover, they even have good relations with the Jews and get united, indeed.

Jews having lived scattered around the world and lived miserably for centuries got together with the ideology of Zionism and became a power in the world. Although their population is only 20 million, they got a position to affect the politics and economy of the 7 billion world population.

At a time Christians and Jews allied with each other, it is only Muslims who cannot see the power of the unity. Although there are many bonds that will unite the Muslims, we do not have the Islamic unity yet.

Today there are more than 1.6 billion Muslims around the world. But they do not have any political, economical and cultural impact world-wide.

The reason that Muslims do not have any impact, despite their great population and economic potential, is the lack of their unity and solidarity spirit. If the political, economical and cultural unity can be achieved, a new power that will change the global power balances is going to appear.

In theory, every Muslim and Muslim states knows very well that the unity of Muslims will help to get rid of the political, economical, cultural and all other calamities that Muslims have had, and that it is the command of Allah as well. And actually they all earnestly wish this unity. However, when it comes to implement that unity, they cannot achieve it just because they cannot free themselves from prejudices and grudges.

It is true that the enemies of Islam are afraid of the unity of Muslims, and they do their worst to block this unity. And it would be naive to expect otherwise from them, anyway.

“Our enemies are ignorance, poverty, and dispute,” said Imam Said Nursi, “We will struggle against these three enemies by means of knowledge, industry, and unity.”

In his Damascus Sermon he stated that “What makes us to stay and stop in the Middle Ages regarding the material development is not to know the spiritual bonds among the believers, which is one of the six dire diseases of Muslims.” And he said in one part, “O my brothers listening to me here in this Umayyad Mosque! And my brothers who will come 40-50 years later in the mosque of the Islamic world! Do not make excuses saying, “We do not have the power to provide some benefits, but we do not give any harm either. So we may be excused.” Your excuse is not accepted. Being lazy, not to work saying ‘why bother’, and not to move despite the incentives of the unity of Islam and Muslim nation are all harmful and wrong.”

Moreover, there is this appalling situation that while the people of misguidance co-operate without any rivalry to get their worldly benefits, the people of belief, Muslims, oppose each other in rivalry and fall apart. In fact, this should be vice versa. The unity belongs to the Muslims and dispute to the heedless. How can this happen?

Imam Said Nursi wrote seven reasons (in The Treatise of Brotherhood) to explain this heart-rending situation. In the second reason he compared the people of misguidance and the Muslims as regard their point of support.

Since the people of misguidance do not rely on the truth or reality, they are weak to achieve their worldly concerns alone. For this reason they need to increase their power to get what they want. That is why they co-operate. And it is as if they make their irreligion a means of solidarity.

Muslims, on the other hand, rely on the truth and reality. They only seek the help of Allah. When they are weak they turn towards Allah, not to man. And just because of the difference of the outlooks, which seemingly oppose each other, they do not feel any need to get unity. In fact, if some stubbornness and egoism are there, it is almost impossible to mention an agreement. Because every group thinks itself as right and the others wrong which lead to discord and rivalry instead of concord and love. And thus sincerity is gone.

Imam Nursi presented nine directives as remedy to this situation:

1. To act positively, that is, out of love for one’s own outlook, avoiding enmity for other outlooks, not criticizing them, interfering in their beliefs and sciences, or in any way concerning oneself with them.

2. To unite within the fold of Islam, irrespective of particular outlook, remembering those numerous ties of unity that evokes love, brotherhood and concord.

4. To consider that union with the people of truth is a cause of Divine succour and the high dignity of religion.

6. In order to preserve truth from the assaults of falsehood,

7. To abandon the self and its egoism,

8. And give up the mistaken concept of self-pride,

9. And cease from all insignificant feelings aroused by rivalry.  If this nine fold rule is adhered to, sincerity will be preserved and its function perfectly performed.

As in every issue, the Holy Qur’an and our Prophet Muhammad (PBUH) are the guidance to us:

And obey Allah and His Messenger, and do not dispute and [thus] lose courage and [then] your strength would depart. (Anfal, 8:46)

We ask Allah (SWT) to give us the unity of Islam soon.