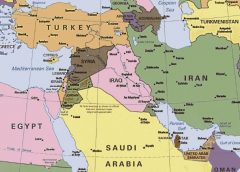 Relations between the Arab peoples of the Middle East and the people of Turkey have a long history. The historic and geographic association between us have led to the concepts of “brotherhood” and “friendship.” More recently, this has led to a joint interest in establishing relationships and foreign policy based on stability, security and welfare.

In this context, the diplomacy that Turkey initiated in the Arab world needs to be viewed within a special context.. This initiative, especially for the institutionalization of Turkish-Arab rapprochement is no doubt a great step. The Middle East is living one of the most critical periods in its modern history, with regional problems creating chaos and the politics have become increasingly complex. Attempting to solve these problems as if they are independent of each other would be a mistake.

The first step is to take the Palestine issue in the Middle East to the centre of all the problems.  We should not forget that the hopelessness, anger and pessimism regarding the Palestine issue have seized the entire region; this gloomy atmosphere creates a climate of radicalism that only feeds these problems.

At this point, we need to start mobilizing the Mecca agreement that was signed between the Palestinians in every area. The Mecca agreement is in accordance with the letter and spirit of unity and solidarity, and it forms the basis for consolidation.  Creating a sense of relief for the Palestinian people will inevitably be seen as opportunities for the advancement of the peace process.

The Arab League should be determined through a pragmatic political program that will emphasize a dialogue with the Palestinian people and their settlement of needs. It should play a positive role by adopting a constructive attitude in approaches to supporting the recognition of Palestine by UN as stressed in many international forums by Turkey.

The Israeli government has to give up its inconsistent and oppressive policies. Adopting the perspective of peace outlined in the Arab Peace Plan is extremely important in solving the Arab-Israeli conflict.

Iraq must be analyzed while taking recent events into consideration.  The murder of dozens of people every day is an additional and another dimension of sectarian conflict. Ending this chaos and corruption is obligatory to protect the territorial integrity and political unity. A divided Iraq will have repercussions for the entire region.  Uniting around the idea of “Iraqi” solidarity will be the most helpful in creating a decision-making body.  In addition, if the Iraqi government embraces a strong central government in this region, stability and peace will be sine qua non for the region.

The development of Iran’s nuclear program demands a shared principle of transparency with Iran’s neighbouring countries. Finding a solution to the problem promptly and through diplomatic channels requires savvy diplomacy and experience in the region.  Turkish foreign policy has continued to work to ensure political stability in Lebanon.  Assistance for the reconstruction of Lebanon and the contributions to UNIFIL show Turkey will remain determined on this issue.

Throughout the Syrian crisis, Turkey’s geopolitical strategic position has been one of connecting the east and the west. The responsibility of ensuring the safety of the security of the Mediterranean Sea will be partly shouldered by the Europe and the U.S., but no doubt significant responsibility will fall to Turkey.

The negative effects of polarization and dissociation have been felt everywhere. Turkey seems to want to “spread optimism” in the region through their recent work in Iraq. This movement of instilling hope to the people of the region will be the biggest factor in avoiding polarization and the trend of growing stability.  Turkey has adopted an approach that embraces almost everyone, eliminating much of the ethnic and religious exclusivity that has isolated countries that could have otherwise been allies and partners.