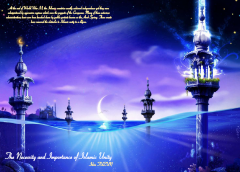 All historical experiences and also the holy sources of Islam urge us to establish unity and develop close ties and improve cooperation amongst ourselves as Muslims.

The Current Situation of the West and the Muslims

The treatment to be prescribed for a great, yet unfortunate, continent; an illustrious, yet hapless, state, and a noble, high-minded people with neither guardian nor companion, is Islamic unity.

The 20th century was a time period in which all the Jewish and Christian nations united and all the Muslim nations disintegrated, crumbled and went down.

The European communities have waged wars among themselves which were called “The Hundred Years’ War”, “The Thirty Years’ War” and “The Ten Years’ War”. In the same way, the two world wars in which millions of people lost their lives took place mostly among the Europeans. These European states which fought each other for a long time, buried their axes and established a “European Union” later. They lifted borders and visas to each other.

The Western countries established the United Nations (UN) and the North Atlantic Treaty Organization (NATO) in political and military arenas.

Also, while the Jews had lived scattered around the world for centuries, they came together motivated by the idea of Zionism during the 20th century. They became a political and economical power although they only have a population of twenty million.

When it comes to Muslims, although there are many common points binding the Muslims to each other, they have been unable to establish Islamic unity among themselves due to European imperialism and oppressive regimes.

From the beginning of the 16th century to the end of 20th century most of the Muslim countries were colonized by the Europeans. Only the Ottomans held out for a long time and finally their empire collapsed at the end of World War I.

At the end of World War II, the Islamic countries mostly achieved independence yet they were administered by oppressive regimes which were the puppets of the Europeans. Many of these notorious administrations have now been knocked down by public protests known as the Arab Spring. These events have removed the obstacles to Islamic unity to a degree.

In the coming years, a new power will emerge on the earth by the unification of 1.5 billion Muslims, which is one fifth of the world population, and which has a great economic potential.

The Necessity and Importance of Unity:

The Muslims have to unite so as to be protected from the attacks and oppression of their enemies. Imam Bediuzzaman says regarding this issue:

“If three 1’s do not unite or come together, they will have only the value of 3. But if they unite or come together, they will gain the value of 111. Four separate 4’s make 16. But if they come together in true brotherhood, along the same line for the fulfilment of the same duty, they will have the value of the power of 4444. History records numerous events which bear witness to the fact that 16 self-sacrificing people in true brotherhood have obtained the moral strength of more than 4000 people. This is because each individual in a true, sincere union can also see with the eyes of the other brothers and sisters, and hear with their ears. It is as if each of the ten persons in true solidarity and unity has the value and power of seeing with twenty eyes, thinking with ten intellects, hearing with twenty ears, and working with twenty hands.” (21st Gleam)

It is known that in history even when the most primitive tribes were confronted with a foreign enemy, they forgot about the internal disputes among them and united against that enemy. The communities and nations which claim service to Islam should ignore simple and little tensions among themselves and should adopt a common strategy against their enemies which attack them as a united front.

O believers! Do you know how many enemies there are who are in the position of attacking the Muslims? There are more than one hundred units which are like circles surrounding each other. While we have to coordinate and cooperate in the face of their attacks, is it not inappropriate for the morality of Muslims that they hold a competitive partisanship and antagonistic fanaticism among themselves, which makes it easier for them to attack and opens the doors for them to invade the private lands of the Muslims?

These enemy units are comprised of seventy kinds of enemies who look upon you with anger and greed and take an aggressive position towards you, including those people of no faith among the Muslims who are the enemies of Islam, and the foreign policy makers of non-Muslim countries. In the face of all these enemies, your most effective weapon is Islamic fraternity. So now is the time to wake up and realize the fact that it is totally contrary to the conscience and to Islamic awareness to let this Islamic fortress be knocked down and destroyed by simple enmities and excuses.

It is reported in the hadiths that “Sufyan and the Dajjal, dangerous and terrible figures who head the centres of conspiracy and heresy, will destroy humankind and enslave the Muslims by taking advantage of the disputes and fights of Muslims and of humanity”.

Our current situation is not too much different to that described here in the hadith.

The Areas of Unity:

The cooperation that the Muslims will undertake in scientific, economic and political areas is the most significant foundation which will save them from the disasters that they are experiencing. For that reason, all Muslims, as individuals, communities, associations or nations, should make this unity their goal, and they should reject everything which might harm this unity.

Cooperation in terms of science, knowledge and education should be established between Muslim countries. Once the books of Muslim scholars, for example Ibn Sina (Avicenna), were taught in the Western universities. Now the situation is the exact opposite. The centres of science and technology are Europe and America.

The Muslims can reverse the current situation by diagnosing and solving their problems in science and technology by establishing international universities, research centres and think tanks.

The Islamic countries should establish an economic unity among themselves.

Many Islamic countries were colonies of the Western countries for hundreds of years. Their resources were exploited by the Westerners and they were kept poor. The main factor behind the riches of the West was the colonization activities that they carried out for hundreds of years. Ziya Pasha, an Ottoman statesman who admired Europe, said in his poem 140 years ago: “I travelled where unbelief dominates and I saw beautiful cities and mansions / I travelled the lands of Islam and saw all ruined buildings.” Today, the situation is no different. We have to beware of political, cultural and economic dependence on the West, just a different version of the old colonization system in a new guise.

The Muslims have a great deal of potential in terms of resources. Most of the world oil reserves are in lands of Muslims. Economic cooperation, exportation and importation will save them from dependence on the Western countries.

Once, the Muslims were the greatest power in world politics. For example, the supremacy of Ottoman sultans in diplomacy lasted indisputably for 150 years. But today the situation is the exact opposite.

Israel oppresses the Palestinians; America intervenes and occupies Afghanistan and Iraq, and Syria mass murders its people, but the Muslim countries with their combined populations of 1.5 billion are unable to do anything. The political and military cooperation that the Muslims could achieve among themselves may put them into the supreme position again that they had in history.

Imam Bediuzzaman spoke as follows in the Damascus Sermon that he gave 100 years ago:

“O my brothers in this mosque and those in the great mosque of the Islamic world who will come fifty years later! Do not think that I have climbed to this pulpit to give you a lesson. I have climbed here to claim our rights from you. That is, the interests and happiness in this world and the hereafter of little nations like the Kurds are dependent on the dominant leading nations such as you Arabs and Turks. Because of your inertia and weariness we, your helpless little brothers together with the other Islamic communities, are suffering.

Especially, O great Arabs who are fully awake and will be awake! I negotiate these words first with you because you were the masters and imams of all the Islamic communities and you were the fighters of Islam. Then the great Turkish nation assisted you in this sacred duty. For this reason if you falter in your duty, this is a great responsibility on you and a sin. But your loyalty and dutiful behaviour in this matter will yield much good for you. We expect from divine mercy that the Arab communities will integrate with each other and form a great union like that of the United States of America, and establish a great unity among Muslims in half or in most of the world, as in the old times, by emancipating them from captivity. If the end of the world does not come before this, the coming generation will see it, if Allah wills.”

In brief, a unity which the Islamic countries will establish among themselves will save them from the oppression and tyranny of other nations. Furthermore, we could say that such a unity will also provide the other non-Muslim communities with peace.

I would like to end the subject with the following important suggestion from Imam Nursi:

“O people of belief! If you do not want to lose your freedom and honour in a wretched situation, then be mindful! Against those who want to take advantage of the disputes among you, take shelter in the fortress of (اِنَّمَا اْلمُؤْمِنُونَ اِخْوَةٌ) “the believers are but brothers”. Otherwise, you will neither be able to protect your life nor defend your rights.

It is well known that while two strong men are wrestling with each other, one small child could beat both of them. If two mountains were in balance in two sides of a scale, a little pebble could disrupt the balance and push one up and the other down.

O people of faith! Your power can decrease because of your greed and fanaticism and then you can be crushed by just a little power. If you are concerned about your societies, then make the following hadith of the Prophet Muhammad (PBUH) the principle of your life and thus rid yourselves of indignity and wretchedness in this world and unhappiness in the hereafter; (اَلْمُؤْمِنُ لِلْمُؤْمِنِ كَالْبُنْيَانِ الْمَرْصُوصِ يَشُدُّ بَعْضُهُ بَعْضًا) “The situation of one believer to  another is like a brick in the wall, in this way they support each other.’”

2 thoughts on “The Necessity and Importance of Islamic Unity”