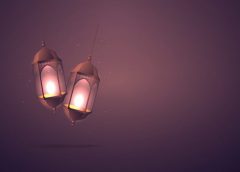 Verses from the Qur’an

“It was the month of Ramadan in which the Quran was (first) sent down as guidance for all people, having (in it) clear proofs of (divine) guidance and the criterion (for right and wrong). So whoever among you bears witness to the month shall then fast it. Yet if one among you is sick or is on a journey (such a person shall then fast) the same number of other days. God intends for you ease, and does not intend for you hardship. Rather, (He wills) for you to complete the number (of prescribed days) – and that you shall extol Allah for (the blessing of faith to) which He has guided you, so that you may give thanks (to Him alone for easing its way and establishing you therein).” (2:185)

“It is for a specified number of days. But one among you who is sick or is on a journey (shall then fast) the same number of other days. Yet for those who are (hardly) able to endure it, (and do not fast) the redemption (for each day) is feeding an indigent person (instead). And if one volunteers a good offering (over and above this), it is better for him (still). However, if you fast (despite difficulty), it is best for you, if only you were to know.” (2:184)

“O you who believe! Fasting is prescribed for you as it has been prescribed for those (who have believed) before you, so that you may be (ever) God-fearing.” (2:183)

Hadiths of the Prophet (pbuh)

“Islam is based upon five: the testimony of La Ilaha Illallah, and that Muhammad is the Messenger of Allah, the establishment of the Salat, giving the Zakat, fasting (the month of) Ramadan, and performing Hajj to the House.” (Jami` at-Tirmidhi 2609)

“Whoever does not give up forged speech and evil actions, Allah is not in need of his leaving his food and drink (i.e. Allah will not accept his fasting.)” (Sahih al-Bukhari 1903)

“There are two pleasures for the fasting person, one at the time of breaking his fast, and the other at the time when he will meet his Lord.” (Sahih al-Bukhari 1904)

2 thoughts on “On Ramadan al-Sharif”