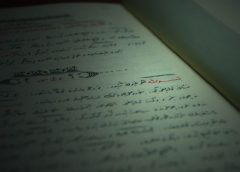 Saying ‘in the name of Allah’ binds man to a power and mercy that are limitless.

“The First Word” from the Risale-i Nur Corpus

If you wish to understand this, then direct your attention to this short allegory. Listen!

Any man travelling through the deserts of the Arab Bedouin must affiliate himself, seeking protection, with the chieftain of a tribe, both in order to ensure that all of his needs are fulfilled, and so that he is saved from the mischief of bandits. Otherwise, he would have to face his endless enemies and needs, distressed because wretchedly alone. On such a journey two men set out to the desert, one of them a humble man, the other deeply conceited. The humble man immediately affiliated himself with a chieftain – but the conceited man refused to do so.

The affiliated man roamed freely. He was in perfect security, wheresoever he should choose to go. If he encountered a bandit, he would say, ‘I am journeying in the name of the chieftain so-and-so’, at which the thug would turn away, unable to touch him. Due to the grace of that name, he would find honour, whichever tent he might enter.

The conceited man, on the other hand, endured unspeakable tribulations throughout his whole journey. Constantly trembling, and constantly having to plead for himself, he ended up wretched and degraded.

Oh conceited lower self! You are that traveller, and this world is that desert. There is no limit to your powerlessness2 and poverty,3 and no end to your enemies4 and your needs! This being so, affiliate yourself with the Endless5 Owner6 and the Beginningless7 Ruler of this desert, so that you can be free from having to beg from created beings, and free from fear of every event.

Yes, the one who acts, saying this phrase, is like someone who enters military service, and thereby acts in the name of the state. He fears no one, for he speaks in the name of the state and of the law. He accomplishes everything – and he can withstand anything. At the beginning, we said that all existing beings say بسم الله ‘In the Name of Allah’ through the language of the states of those things. Is that so?

Yes – if you were to see a single individual come along and forcibly drive out every inhabitant of a city to a particular place, and then compel them to work there, you would be in no doubt whatsoever that such a man could not possibly be acting in his own name or through his own power alone. Rather, one would be forced to conclude that such a person must be a soldier, acting in the name of the state, and relying on the power of the ruler. It is in a similar way that all existent beings act, in the name of Allah. The very minutest, particle-like seeds and stones bear gigantic trees above their heads, and hold up mountainous burdens! Thus do all trees say, بسم الله ‘In the name of Allah!’ and fill their hands with fruits from the treasury of mercy. They present these fruits to us, just as a street vendor displays his goods! Every garden says, بسم الله ‘In the name of Allah’ and becomes one of the cauldrons of the kitchen of Divine Power in which diverse types of delectable foods are together cooked in abundance. Every single blessed animal, like the cow, the camel, the sheep, and the goat, say بسم الله ‘In the name of Allah’. Thereby do they become springs of milk from the outpouring of Divine mercy, offering to us, in the name of the Provider,10 a most fine and pure food, like unto life-giving water. The slender, pliant and silk-like roots and rootlets of every single plant, tree and herb, say بسم الله ‘In the name of Allah’. Thereby do they pierce hard rock and earth, whence they then emerge. They say ‘in the name of Allah’ and ‘in the name of al-Rahman’,11 and all things become subjugated to them. Yes, consider the perfect ease in which roots spread through hard rock and dry earth. Under the earth, they give fruit just as easily as branches are able to spread in the air and produce fruit. The way green leaves, fine and delicate, stay moist for months despite the blight of extreme heat! All of this constitutes a real slap in the mouth for the naturalists, and pokes a finger into their eyes – may they be blinded – saying all the while, ‘even hardness and heat, upon which you so much rely, act through a Divine Command – for these rootlets, though delicate and silk-like, break apart rocks – thereby obeying, like the staff of Moses, peace be upon him, the Divine Command, إِضْرِب بِعَصَاكَ الحَجَر  ‘Strike the rock with your staff’12 Leaves, as fine as cigarette-papers, recite the verse يَا نَارُ كُونِي بَرْدًا وَ سَلَامًا ‘Oh Fire! Be coolness and peace’13 to the burning heat, just as did the limbs of Ibrahim, upon whom be peace.

A question: To those who have no greater role than simply displaying merchandise, we pay a price. So what price does Allah ask, the True Owner of all goods?

The answer: Yes, in return for these precious benefactions and goods, the True Benefactor15 asks three things of us:

The First: Remembrance16 of Allah

The Second: Gratitude to Him

و السلام(Peace be with you then!)21

1- لسان الحال (lisanu’l hāl) All of the beings in the universe have languages particular to them – this is lisanu’l hal, or the ‘language of state’. Just as meaningful communication with human beings depends on our learning the language that they speak, so too is our learning the language of the universe a prerequisite to our understanding its ‘speaking’. The universe is a book written by the pen of the might of Allah that describes His holy names and attributes. Reading this book enables us to acquire knowledge or ‘gnosis’ of Allah [ma’rifatu’l Allah], as in, for example, each being’s particular form speaking, in the language of its state, of the name al-Musawwir, ‘the Shaper’, and in the life in all creatures’ speaking of the name al-Muhyi, ‘the Giver of Life’.

2- عجز Powerlessness (‘ajz) – vis-a-vis his Creator, man is utterly powerless, and cannot fulfil any of his goals without the power and permission of his Lord. Man’s total inability to create is alluded to in the Qur’anic verse و الله خلقكم و ما تعملون  Allah created you and that which you do

3- فقر Poverty (faqr) – the state of ‘not possessing that which one needs’ In this context, the Imam is referring to man’s existential, ontological poverty – he is in a state of total and absolute need of Allah, and can, of his own accord, achieve or acquire nothing that he needs for either this world or the next. This is alluded to in the Qur’anic verse قل اللهم مالك الملك تئتي الملك من تشاء و تنزع الملك ممن تشاء

5- الأبدي (al-abadi) The Endlessly Eternal –  a name of Allah, it refers to the fact of His existence continuing endlessly.

6- المالك (al-mālik) The Owner – Allah. He Who has absolute ownership of all being.

7- الأزلي (al-azali) The Beginninglessly Eternal – as an attribute of Allah. He Who exists forever and without beginning.

8- شفيع (shafī’) Intercessor – a thing or person into which Allah manifests the ability to mediate human sins in order that they be forgiven, rather in which the light of the sun becomes reflected in a mirror. There is consensus in the Islamic tradition that Prophet Muhammad, blessings and peace be upon him, will be intercessor for all believers on the Day of Judgement, a consensus that is based on numerous indications from the Islamic scripture.

9- القدير (al-qadīr) The Almighty – Allah. He Who has the power to do all things.

10- الرزّاق (al-razzāq)The Provider – A name of Allah. He Who created provision and those creatures for whom He provides, delivered that provision to them, and created means by which they might enjoy it.

11- الرحمن (al-rahmān) The Merciful – A name unique to Allah – He Whose mercy embraces all things.

15- المنعم (al-mun’im) The Benefactor – Allah, He who bestows blessings upon His creation.

16- ذكر (dhikr) Divine Remembrance / Remembrance of Allah – the devotional act of invoking, silently or aloud, the names of Allah whilst contemplating His nature and actions, as well as His attributes and their effects.

17- تفكّر  (tafakkur) Contemplation – ‘The intellect’s reflecting on the meanings underlying things in order to arrive at knowledge of their true realities.’ The purpose of contemplating Allah’s creation is to drive us up to gnosis of Allah [ma’rifatu’l Allah]

18- معجزة Miracle (mu’jiza) – a miracle is an occurrence that Allah creates at the hands of one of his messengers that ‘breaks norms’, that is, places man in a state of astonishment by exceeding his assumptions about the bounds of normative reality.

19- الأحد (al-ahad) The Singular – Allah, He Who is in His being absolutely One, and not in any way a composite. It is thus, Imam Nursi explains, that Allah manifests His names and attributes throughout all of His creation. See the Fourth Word of the the Second Station in the Twentieth Letter.

20- الصمد (al-ṣamad) The Independent and Eternally Besought – Allah, He to whom all go with their needs, but Who is Himself totally without need.

21- The expression al-salam, from the Arabic for ‘peace’ is in Turkish used to express that a piece of writing or address has been sufficient in conveying a meaning, and has come to an end.

4 thoughts on “The key to limitless power”