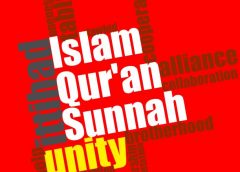 Ittihad will save the oppressed from tyranny and help many people to see the guidance of the religion of tawhid.

When our Prophet Sallallāhu Alayhi Wasallam died, the entire Arab peninsula had been conquered. Then, in the period of thirty years of Caliphs, the borders of the Islamic State was extended to the interior of Anatolia and Azerbaijan in the north, to Herat in the east with the conquest of Iran and to Tripoli in the west. In the period of the Umayyad, Islam crossed the whole of North Africa to Spain via the Strait of Gibraltar, and from there to the borders of France. And in the Abbasid era, we see an Islamic state ruling the world. The Abbasid State, which represented the Caliphate for five hundred years, established the Islamic Unity in a sense. While the Caliph was performing the religious and political leadership in Baghdad, in the Abbasid State, at the same time he was the religious leader of the other independent Islamic states. The best example of this is Seljuq State. Seljuq Sultans, if necessary, protected the Caliph and Baghdad from the invasions of enemies.

After the withdrawal of Abbasid State, in the year of 1258, from the stage of history, Ottoman Empire fulfilled the Islamic Unity truly. In its 640 years of life Ottoman Empire was both the religious and political leader of Muslims for five hundred years. Before the Caliphate was handed over to Ottomans, they fought alone against the crusades and won all the wars as from the era of Sultan Murad II. Even in the period of Sultan Abdulhamid II, when Ottoman Empire was not powerful as in the past, historical records tell us that there were serious connection and relation among Ottoman Empire and other Muslim states and communities. In Europe, the theatres insulting Islam and our Prophet (saw) were being cancelled before they were staged thanks to the intervention of Sultan Abdulhamid II.

The Islamic Unity is the Cement of the Islamic world

Ottoman Empire, in its five hundred years of religious and political leadership of the Islamic World, never broke up the relations with the Muslim communities such as Muslim Turks in East and West Turkestan, Muslims of Indonesia and Malaysia, and Muslim communities perhaps we have not even heard their names. Because the Caliphate, which continued since the Age of Bliss (Asr al-Saadah), required that. Just as the spiritual centre of the Islamic world is Hejaz, Istanbul was the political centre of the Islamic world. Khalifah was in Istanbul and had to deal with the problems of all Muslims, not just Muslim Ottomans. Historical records, again, are lighting our way in this regard: Aceh Muslims who wanted help from Ottomans against the Dutch attacks, West Turkestan Muslims who asked for help against the Russian attacks, East Turkestan Uighur Muslims who called for help against the Chinese attacks, Andalusian Muslims who wanted help against the Spanish attacks and many more.

Our historical responsibilities continue today. A mother whose son was killed by the Serbs in Bosnia, a widow woman whose husband was killed by the Russians in Chechnya, children killed by the Israelis in Gaza and the persecuted Muslims in East Turkestan, Kashmir, Iraq, Syria and in many regions of the world have right on us. And the Islamic Unity requires that we cannot remain reckless to their circumstances. We cannot sleep in our comfortable beds while they are persecuted and tortured and cannot find a piece of bread to eat. The only remedy that will be balm to our wounds is the Islamic Unity.

“If we were to display through our actions the perfections of the moral qualities of Islam and the truths of belief, without doubt, the followers of other religions would enter Islam in whole communities; rather, some entire regions and states, even, on the globe of the earth would take refuge in Islam.”

We understand from this explanation of Imam Bediuzzaman Said Nursi in the Damascus Sermon that if we live in the real sense of Islamic morality and if we can show this life style to Europe, America, the Far East and parts of Africa which have not met Islam, the people living there will be Muslim. The best proof of this is the conquests and the people converted to Islam during the periods of Abbasid State and Ottoman Empire, in other words in the times of the Islamic Unity. Turks who met Abbasids, Aceh people who met Muslim Arab traders and Bosniaks who met Ottomans are the best examples of this situation.

Years before Istanbul was conquered, Orthodox groaning under the oppression of Catholics in Istanbul often said: “Better the Turkish turban than the Latin mitre!” This saying proves that if we live Islamic morality and justice ourselves, and then show it to the members of other religions, this may lead them to the right path in future.

Even in its weakest periods, Ottoman Empire gave the biggest fights against the threats to the Islamic world. In Çanakkale the victories of Ottoman Empire, representing the tawhid, against the western states like Britain and France, representing the shirk, came from the spirit of the Islamic Unity; because while the Ottomans were fighting in Çanakkale, in fact, they were fighting for Istanbul, the centre of Caliphate. Even if they were having their most troubled time of their history, they felt the spiritual support of the whole Islamic world. Muslims who are distressed or persecuted nowadays will be able to get rid of these troubles and persecution in the true sense by Islamic Unity. Otherwise, neither Jerusalem, nor Kashmir and nor Kashgar can be saved from oppression.

One thought on “The Gains of the Islamic Unity”

Education of Syrian children in Turkey

In Pursuit of Islamic Civilization

One Million Qur’an to Africa