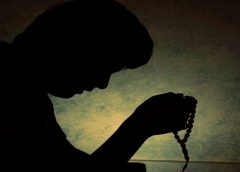 Allah blessed His servants with “free will” to choose between good and bad. He commands His servants to prefer good over evil; right over wrong; halal (lawful) over haram (unlawful) and promises heaven, the great reward, to those who obey His commands. As for those who are beaten by their nafs and the devil and disobey orders, Allah (SWT) calls them to repentance and opens the doors of His infinite forgiveness.

“And turn unto Allah together, O believers, in order that ye may succeed.” (Nur, 24:31)
“O ye who believe! Turn unto Allah in sincere repentance! It may be that your Lord will remit from you your evil deeds and bring you into Gardens underneath which rivers flow, on the day when Allah will not abase the Prophet and those who believe with him. Their light will run before them and on their right hands; they will say: Our Lord! Perfect our light for us, and forgive us! Lo! Thou art Able to do all things.” (Tahrim, 66:8)
Our Beloved Prophet Muhammad (PBUH) states in his hadith that making mistakes and sinning is a necessity of being a human:

“Every human commits sin. The best of sinners are those who repent (turn back from their mistakes regretfully).” (Tirmidhi)

In another hadith, he states what great mercy our Lord has:
“By Him in Whose Hand is my life, if you were not to commit sin, Allah would sweep you out of existence and He would replace (you by) those people who would commit sin and seek forgiveness from Allah, and He would have pardoned them.” (Muslim, vol. 4, Book 37, Hadith No. 6622 & 6621)

What shows “sin” as an obstacle to dua is either the misgivings of the devil or the heedlessness that has occurred in the soul because of sins, since each sin makes a wound in the heart and soul. As long as the sin continues, these spiritual wounds deepen and cause misgivings and doubts. Misgivings harm both the faith in the heart, and also on the tongue which is the translator of the heart.

For example, a sick person may feel the need for nourishment and vitamins more usual, but he doesn’t want to eat anything because of his lack of appetite. He may even be annoyed by the smell of food. It is exactly the same as a tongue wounded by sins which has become sick. The tongue is in need of the remembrance of Allah, of praying to Him and performing worship, perhaps more than at any other time. However, sins take away his appetite and alienate tongue from worship and supplication, and may even produce a feeling of “hate” towards worship, so that man cannot summon enough effort and strength to perform worship.

“Every illness has a cure; the cure for sins is to pray to Allah for forgiveness.” (Shirat-ul Islam)

So, when we commit a sin, we should not give up prayer. On the contrary, we should pray and repent more than at other times and ask Allah for help.

Satan does not want human beings to repent

Satan tries two ways in order to hinder man from repentance. He either gives man the impression that he is sinless, or that he has such an enormous amount of sin that they will never be forgiven.

One who doesn’t acknowledge his sin never asks for forgiveness

The devil hinders man from seeing his sin by imbuing him with thoughts like “how much sin can I have? I’m an extremely good person”. Or when he is face to face with a problem, he always accuses others and says, “He is the guilty, not me. If he hadn’t behaved in such and such a way, I wouldn’t have done such and such.” A person who does not acknowledge and confess his mistakes, does not admit his sins, and consider himself to be impeccable. Such a person never repents and asks for forgiveness. He is always conceited and arrogant. Thus, he falls into the trap of the devil. The one who admits his sin asks Allah for pardon; he seeks refuge in Allah (SWT) from the traps of the devil. He asks Allah for help by means of prayer.

“Say: O My slaves who have been prodigal to their own hurt! Despair not of the mercy of Allah, Who forgiveth all sins. Lo! He is the Forgiving, the Merciful.” (Zumar, 39:53)
Considering sins as impossible to forgive is definitely a situation of despair. Despair is the hardest enemy, the most serious illness of man and the most dangerous weapon of the devil. The devil paralyses man’s ability to worship with this weapon. A hopeless man assumes that whatever he does, no matter how much he worships and asks for pardon, Allah will never forgive him. He thinks: “My prayers and supplications are not appropriate for Allah. So I can’t ask Him for pardon with such big amounts of sins. I can’t ask Him anything.” Therefore, he doesn’t even repent. That is how the devil entraps him. And that is exactly what the devil wants. By giving up worship and supplication, he utterly submits to Satan. However, Allah, the Merciful (SWT) declares in many verses and hadiths that He will accept repentance of a sinner no matter how much sin he has.

“Even if your sins were so numerous as to reach the lofty regions of the sky, if you repent, they will absolutely be forgiven.” (Tirmidhi, 2332)

“And whosoever repenteth and doeth good, he verily repenteth toward Allah with true repentance“ (Furqan, 25:71)

We should repent immediately

Repentance should be made immediately, losing no time and should never be delayed. Lots of glad tidings are covenanted to those who repent and ask Allah for pardon.
“Repentance with Allah is only for those who do evil in ignorance, then turn (to Allah) soon, so these it is to whom Allah turns (mercifully), and Allah is ever Knowing, Wise”. (Nisa, 4:17)

“ A Mumin (believer) makes a mistake, but right afterwards he repents.” (Tabarani)