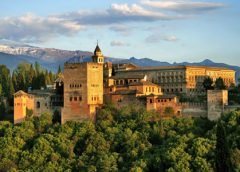 I was about to finish A history of Islamic Spain by M. Watt and P. Cachia published by Küre Pub. When I read the article “The Sound of the Call for Prayer in Cordoba after centuries” in the website dunyabulteni.net on Wednesday October 26.

The article giving good news reads: “From now on, Muslims can recite the call for prayer out loud and practice their prayers just next to the Great Mosque of Córdoba which had been built delicately throughout 205 years by Caliphs of Andalusia and right after the end of the existence of Islamic power there the call for prayer had been stopped. The previous Friday, the first Friday prayer took place.”

It is still forbidden to pray in the historical Great Mosque of Córdoba even though the call for prayer started to be recited in the small mosque next to it! The Spanish government responds very harshly to people who want to pray even if they are a few.  We should wait the population of the Spanish Muslims to increase to see Cordoba return its old days.

The eight-century-long Andalusian history is full of lessons. The conquest of Spain, Andalusia as a state of Umayyad Caliphate, the independent Andalusia Umayyad Emirate, Almoravid dynasty, Almohad dynasty, the glory of the Andalusia Caliphate. Scientific, cultural, architectural, civil, literary developments…

Which elements did take part in the foundation and collapse of such a civilization? More importantly, how could Andalusia be and still continue to be a source of inspiration for the whole world even during its collapse?

According to Ahmet Davutoğlu, the Andalusians founded a civilization that played a bridging role and based this role on “a strong identity” and “the psychology of self-confidence”. So, Andalusia gave elixir which would be source of life to other societies even while it was collapsing.” Strategic Depth, Kure Pub. P. 92)

Leaving the conditions and circumstances of its foundation and the reason of its collapse to another article, I would like to point out the principal historical features of Andalusia:

Interest in Andalusia in Turkey started when Ibn Arabi came to Anatolia (1165-1240). During its collapsing process, the Ottoman Empire responded to its call for help. Thanks to captains such as Kemal Reis, Spanish and Portuguese shores were bombarded and Muslims and Jews were brought to Anatolia from Spain. History of Andalusia (Endülüs Tarihi) translated by Ziya Pasha increased further the interest in Andalusia.

Hazrat Bediuzzaman describes Andalusia as the Master of Europe and he emphasizes that conserving the religion is directly proportional to getting civilized: “Also, whenever the people of Islam have adhered in earnest to their religion, they have advanced proportionately, achieving great progress. Witness to this is the greatest master of Europe, the Islamic state of Andalusia” (26th Letter, The Letters)

The reasons of the collapse of Andalusia Caliphate and the features of its civilization will be discussed in another article.