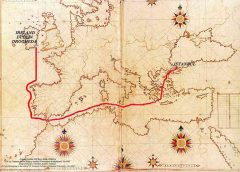 Two years ago, while the President of Ireland was visiting Turkey; she brought a gift to the Turkish President as a remembrance of the Ottoman aids sent by Ottomans by ships. Then I decided to study and research this topic. Because, this study will be of great value to understand the Ottoman point of view on humanitarianism.

Ireland is an island in northwest Europe in the North Atlantic Ocean on the western part of Great Britain. It is separated from England by the Irish Sea and from mainland Europe by the Celtic Sea. It is surrounded by a ring of coastal mountains from its northern, southern and western shores. Ireland’s history has been shaped from the eastern coastline by contacts with its eastern neighbor, the United Kingdom, across the narrow passage of the Irish Sea. [1]

Ireland faced many problems and difficulties but the most destructive one the Great Potato Famine. Before the famine the population of the country was over eight million. There was a long-lasting potato blight, harmful factors of insufficient amount of land for cultivation. Besides all one third of the population depended solely on potato and the political situation made the disaster more serious. According to the official data of the time, about 1.4 million people died and 1.5 million people emigrated.[2] The Ottoman Empire, Queen Victoria, Native Americans[3] sent supplies during the famine times to help the Irish people. Of course there were many disastrous effects of the famine on the Irish culture, language and population.[4]

I have benefited from the BOA to find the primary sources on the subject. Unfortunately, I could not find documents about the Ottomans aid sent by ships. However, to my surprise, there was a document on the monetary aid sent in cash.

The information gathering style of the Ottoman Empire is extremely detailed. All types of information are gathered on her allies as well as rivals, and I can see the surprising effect on the British rule. Some of the documents about the aid showed us that the crown authority was not expecting any Ottoman move of aid for the famine or in this Irish problem. Sending to Ireland in their time of need would increase the friendly feeling between these two societies.

Although I could find and have studied only six documents about the aid of the Empire, none of them were referring to the ships the aid was sent in. They were about the aid in cash.

In some secondary sources, I have found the aid sent by Ottoman ships. According to the sources, the Ottoman Empire sent five ships full with livelihood to Dublin port but English government did not accepted them. Then, the captains went to Drogheda secretly, another port in the north of Dublin, and unloaded the ships and the seamen stayed in the city hall. As the documents claim the town hall became a museum in 1995 to pay their respect. The crescent and star in the emblem of Drogheda were put for remembrance of this Ottoman aid. Some parts from those documents related with the aid in cash and sent by ships:

…Ottoman Sultan Abdulmecid sent five ships full of food supplies and funds as charity. However, the British administration did not give permission for these ships to enter the ports of Belfast or Dublin. Taner Baytok, former Turkish ambassador to Ireland, recounts in his memoirs that these ships secretly discharged their load in Drogheda, a town approximately 70 miles north of Dublin. In May 2, 1995, commemorating this charity, the mayor of Drogheda, Alderman Frank Goddfrey, and paid honor to Baytok and erected a plaque in the Westcourt Hotel, which was then the City Hall where Turkish seamen stayed. Baytok says he first learned of this act of charity from an article by Thomas P. O’Neill published in The Threshold magazine in 1957…”[6]