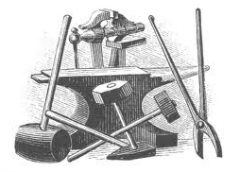 One day, an innocent blacksmith, who worked and got exhausted for sustenance of his children and was returning home innocently, was mistakenly arrested and imprisoned by the officers of the governor of Khorasan. They supposed he was among the ones who were breaching the peace and security of the city at that very moment of the night.

He was in prison then. Performing salah (prayer) in his dark chamber with such a deep sorrow, the mistakenly arrested man raised his hands open and sincerely prayed:

“O my Lord, do not make those sleep a wink at their homes who prevented me sleeping at home. Shake their houses onto them till the morning!”

The governor, who had just lain down, realized that his house was trembling terribly and he got out of his home suddenly. Then, he realized that it is not an earthquake. He retuned and lay again whispering “Thank God, it’s only a dream”. However as soon as he closed his eyes he felt the same tremor again and this situation went on till morning.

The following day, the fair-minded governor, thinking that there must have been a strange reason behind this incident, called his prison manager and asked him whether he tortured anybody innocent.

The prison manager talked about a man whom he heard praying as “O my Lord, do not make those sleep a wink at their homes who prevented me sleeping at home. Shake their houses onto them till the morning!”

“From now on, make sure that if you face any kind of misunderstanding or if you are in trouble, please call me and I will protect you!”

The answer of the blacksmith was moving and made the governor cry, which was:

“Why am I to call for help from you? Are you not the wicked man who imprisoned me because of a crime which I never attempted? I do not need neither your help nor your refuge. I seek help from the One, Who saved me from your unfairness, and I seek refuge in Him, Who is the Most Powerful and the Answerer of All Prayers and the Supplier of all needs.

Unless He had not accepted this weak and oppressed man’s prayer, and shaken your house on you, you would not have come and called me to your room, and most probably I would still have been suffering in the dark and dusty corners of the prison!”