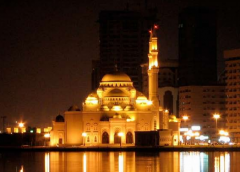 There are many purposes and instances of wisdom in the fast of Ramadan which look to both Allah’s (SWT) Lordship (rububiyyah), and to man’s social life, his personal life and the training of his instinctual soul, and to his gratitude for Divine bounties.

One of the many instances of wisdom in fasting from the point of view of Allah’s (SWT) Lordship (rububiyyah) is as follows:

Allah (SWT) created the face of the earth in the form of a table laden with bounties, and arranged on the table every sort of bounty in a form of “From whence he does not expect” (Talaq, 65:3) in this way stating the perfection of His Lordship (rububiyyah) and His mercifulness and compassionateness. Human beings are unable to discern clearly the reality of this situation while in the sphere of causes, under the veil of heedlessness, and they sometimes forget it.

However, during the month of Ramadan, the people of belief suddenly become like a well drawn-up army. As sunset approaches, they display a worshipful attitude as though, having been invited to the Pre-Eternal Monarch’s banquet, they are awaiting the command of “Fall to and help yourselves!” They are responding to that compassionate, illustrious, and universal mercy with comprehensive, exalted, and orderly worship.

The Need for Prophetic Morality in the Modern Islamic World

Employer and Employee Relations in Islam