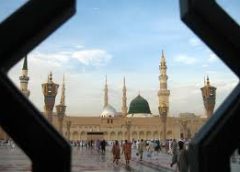 Lesley Stahl hosted Madeleine Albright, then-the Secretary of State of USA, in a news programme. They talked on the US sanctions against Iraq  after first Gulf war in which many  children lost their lives due to lack of nutrition and medicine. When Lesley asked her guest “We have heard that a half million children have died. I mean, that’s more children than died in Hiroshima. And, you know, is the price worth it?” The response that she got was shocking: “I think this is a very hard choice, but the price—we think the price is worth it.” (60 Minutes (5/12/96))

From time to time, you hear some people claim that the religions have always been the source of clash, unrest and division in societies. They do not stand there and you see that they use some historical facts (death tolls in religious wars) to prove their claims. Indeed, what they do is a biased and naive reading the historical facts. Even a slightest glance at modern, secular international or world wars will suffice to see the truth about the wars.

The atrocities committed against innocent civilians for nothing except for “highly worldly interests!” in the last ten years show us how humankind may turn into a murder machine for his lustful contemptible passions. To reach his mean goals he tries, legal or illegal, every kind of vehicle.

The United Nations is an international organization whose stated aims are facilitating cooperation in international law, international security, economic development, social progress, human rights, and the achieving of world peace. The UN was founded in 1945 after the World War II to stop wars between countries, and to provide a platform for dialogue. Such an organization that was founded for aforementioned lofty goals was one of the perpetrators of the brutality which I mentioned in the entry of the article. This ferocity in Iraq was committed with UN resolution taken by USA leverage. According to World Health Organization report, 794 thousand children died due to the embargo between 1991 and 1998. In this report you can see the death numbers during all these years in a detailed way. For example, only in 1998, 250 thousand children under five died in silence in Iraq. What is the most saddening is all these took place with the awareness and confirmation of the international public opinion. Everybody took it as a natural, ordinary incident.

I have not yet mentioned the other state murders happened during these last ten years and it is not necessary to talk about it actually. Keeping going on talking about numbers, tolls and reports causes us get used to the deaths of people and makes them appear to be routine.

We read the life of the Prophet Muhammad (PBUH) through many different sources. When we do not pay a special attention to the death numbers in the wars during the life of Prophet we may have a false impression. Personally, I thought without a deliberate conviction that thousands of people lost their lives during these wars. When I learned for the first time the exact number of the people who died during these wars from both sides I was very surprised. Only four hundred people had died in all the wars, clashes and campaigns when the Prophet was alive. 150 of them were Muslims and the other 250 were the idolaters who were all warriors. Namely, the ones who were equipped and armed to fight and the ones who fought against each other had lost their lives, but nearly none of the civilians was deliberately killed.

In Islam, the war is not something desired or commanded unless you are assaulted by your enemies. Indeed, in Arabic, the equivalent of the term “war” is “jihad”, but war is only one connotation of jihad. Jihad is broadest meaning is to struggle and endeavor  in the way of Allah with your money, time and body,  so Muslims can perform many things to make jihad such as founding charity organizations, schools and buildings, teaching knowledge to people and most importantly to control your lustful soul. War is only one sort of jihad and it is applied only when it is necessary. The following hadith of the Prophet (PBUH)  is clear about this matter: “O people, do not hope to confront your enemies, demand goodness from Allah, and when you confront them have patience for hardship against them and know that the heaven is under the shadows of the swords!”

The Prophet Muhammad (PBUH) installed a law of war because he was a Prophet of Mercy as well as he was a commander of a state. To fight against his enemies had become inevitable for the security of Muslims and Islam but to provide the security of Muslims could not be an excuse to kill people arbitrarily. He would say “I am the prophet of mercy. I am prophet of war.” He meant I would fight against my enemies, not the civilians or the other people.

The first group of people which we will discuss in Islam’s law of war is prisoners of war (POWs). There are a couple of ways of treatment which applied to POWs. They are either ransomed or exchanged with other prisoners or liberated without any payment. Furthermore, the bodies of dead enemies were not left on the ground and they are buried.

The other group of people who are banned to be given damage are senile people. Since they can not judge what is right and what is wrong, they are not responsible for what they do.  Besides, the people who are too old are also forbidden to be killed because they are like children. Anas bin Malik (RA) narrates: “When the Prophet sends off a troop detachment or an army he used to say: “Set off with the name of Allah. Fight in the name of Allah and for the religion of Allah. Do not kill old men!”

Another narration is from Abdullah bin Abbas (RA): “When the apostle of Allah sends off his army he used to say to them: “Do not kill the children and the people of chapels.”  Here, “people of chapel” means people who withdraw from the social life and devote themselves to a belief. If they are not a part of the army against the Muslims, the Prophet inhibits his soldiers to harm them.

The other groups of people are workers and servants. If these people do not carry the intention to attack Muslims, it is illegal for Muslims to attack them. Their being together with enemy army is not enough to consider them as enemy.  The Prophet used to command his soldiers and say “do not kill workers and slaves”.

While the Prophet was alive this was the way of Muslims’ treating these groups of people during the wars. Of course, throughout history some Muslim armies may have committed some injustices and even some ferocities. However, what I stress is the law of war which the Prophet (PBUH) implemented in Islam is the standard code of conduct in wars.

Today, in Europe and USA some so-called “experts of Islam!” bombard the society with misinformation about Islam and its prophet, Muhammad (PBUH). Especially, the men such as Robert Spencer, Daniel Pipes and Geert Wilders both distort the facts and use some hadiths and verses out of context to stain the Islam in the eyes of people. What is interesting is that those men and some radical Muslim elements whom they consider as enemy are unanimous in this distorted interpretation of Islam.

On the other hand, accusing radicals of both sides and keeping watching them or staying in the position of defense will not prevent these things from happening. As mainstream Muslim society we should use all legal ways and instruments to show real morality of our Prophet (PBUH).  Arts, literature, sports, education and cyber world: All these fields wait us to make feel our existence as Muslims.