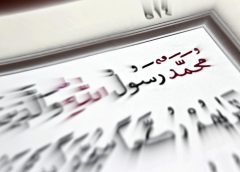 While Sufyan al Thawri was performing tawaf (the ceremony of going around the Kaaba during the pilgrimage at Mecca) around the House of Allah he saw a man who was saying only salawat (prayers for the Prophet) as he was raising and lowering his feet on the ground and he asked: “What are you doing? Do you not know any other prayers?”

The young man answered, “Since you are a foreigner in this town, let me tell you. I was on my way to Hejaz with my father. He died on the way. I stayed and cried over him without burying him until nightfall. Then I was overwhelmed by the need for sleep and so I slept.

I realized that my father’s face was dark. I shivered from fear whenever I looked at his face. Later, I saw a man approaching us. He was saying salawat while raising and lowering his feet. He approached and uncovered the veil from his face.

He rubbed my father’s face and then his face became pure white. When he was leaving, I ran after him and asked, “Please tell me, who are you?”

He said: “I am Muhammad, the son of Abdullah! Your father was a sinful man, but he used to say much salawat on me when he was alive. I give help in their hard times to those who say salawat on me.”