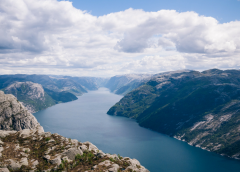 Islam teaches belief in one god, and that this God is not some arbitrarily chosen god amongst other gods, but the beginninglessly eternal reality, the Only God, Who did not beget, nor was He begotten.

The seven heavens and the earth, and all that is in them glorify Him; and there is nothing but that it proclaims His praise, but you do not understand their glorification. Surely He is All-clement, All-forgiving. (Qur’an, “the Chapter of the Night Journey” 17:44)

A town cannot be without a mayor, a needle without a maker or an owner, nor a letter without a writer. (Said Nursi, The Book of Light, the Resurrection Epistle)

Islam teaches belief in one god, and that this God is not some arbitrarily chosen god amongst other gods, but the beginninglessly eternal reality, the Only God, Who did not beget, nor was He begotten (Qur’an 112:3). Familiar causal concepts of coming into existence from nothing, and then leaving existence because of physical or other forms of deterioration, apply to us but not to Him, for He is the Author of nature (and thus the Author of causality itself): He is Reality Itself.

Some in modern times may ask “how do we know that such a ‘Reality Itself’ actually exists?” or even “who created God?” Yet only someone who has not understood the fundamental claim of theism could ask the latter question in seriousness, for as we have just seen, God is non-composite, eternal and timeless, and is the source of cause and effect itself – some necessary being must account for the fact that the causal world exists in the first place, and that being is God.

The answer to the former question – that of how we can know that God exists – is that our knowledge of the existence of God has two sources. On the one hand, logic and reason tell us (amongst many other rational proofs) that the physical beings (individually or taken as a whole) in the cosmos in which we live cannot be the source of their own existence. It is no accident then that the great sages of Ancient China and India independently came to the same conclusion as did Socrates, Plato and Aristotle (not to mention Plotinus, Descartes, Leibniz, Newton, Schroedinger, Heisenberg, Planck, Gödel and many others): a timeless and infinitely rich Being is the source of the world of phenomena that we are each a part of and that we each experience over the course of our lives. Without a Necessary Being, without there being “Being Itself”, how could there be anything at all? And once we see all of the individual, intelligible, coherently meaningful and beautifully balanced creatures and things around us, how could we possibly ascribe them to unconscious forces? As Imam Nursi says in the “Second Impossibility” of his Epistle on Nature:

If an existent being constitutes a unity [i.e one particular thing – Nursi is here referring to the existence of individuals and individual identities], there is no doubt that it has its origin in one being and one hand; this truth comes  on the authority of the principle that states ‘a unity can only issue from that which is itself unity’. This is especially the case if the specific existent being in question happens to be harmoniously ordered to exceptional perfection, and is sensitively balanced – and if its mode of life is all-inclusive. The ascription of this wondrous, masterful, and finely balanced being to the chaotic hands of a limitless number of inanimate, wayward, unconscious, blind and deaf and brute physical causes is as far from being rationally defensible as one’s assent to a hundred [obvious] logical impossibilities would be. This quite apart from the fact that in their extremely violent state of chaos, the blindness and deafness of these causes becomes even more accentuated, as they become amalgamated and mingle within the endless routes down which possibility may take us. [Each individual] being itself self-evidently shows that it is not the cause of many hands, which would have caused disharmony and chaos, but rather that is issued from one, omnipotent and surpassingly wise hand.

Revelation is the other source of our knowledge of the existence of God. Revelation, a concept which has been central to the majority of human lives for tens of centuries, is the Divine disclosure to human beings of the nature of human existence, the universe, and God Himself.

God’s own words are revealed to a Messenger that He has appointed from amongst mankind, a person made by God to serve as a perfect example of all that men and women should aspire to, both in terms of the beautiful character and treatment of fellow man that the Messenger embodies (which fulfils mankind’s moral and ethical dimension, and in Islam is formulated through the Sacred Law or sharīʿa) and in terms of the closeness to God with which the Messenger has been personally blessed, and which through his teachings, he makes available to those who follow him. In Islam, this revelation comes in the form of the Qur’an, and the message of the Qur’an is exemplified in the life and person of the Holy Prophet Muḥammad, may the blessings and peace of God be upon him. You have a beautiful example in God’s Messenger, for whosoever hopes for God and the Last Day, and remembers God often (Qur’an, the Chapter of the Clans 33:21). This “beautiful example” is a practical, lived example of a life of both action and contemplation, one of complete devotion to God and dedication to fellow man; a life of spiritual and moral perfection, because it is the life of the Perfect Man (al-insān al-kāmil). Authentic sayings of the Holy Prophet, blessings and peace be upon him, indubitably provide great inspiration for Muslim altruism, self-sacrifice and spiritual endeavor, words like “Be joined to those who cut you off, give to those who withhold from you, and forgive those who oppress you.” Yet it is actual examples of the moral conduct of the Holy Prophet, blessings and peace be upon him, that are perhaps the greatest motivating force for Muslims. One of his Companions famously recounted, “I served the Prophet for ten years, and he never once said to me “why did you do such and such,” or, “why did you not do such and such?” The Holy Prophet, blessings and peace be upon him, never retired for the night while there was still any wealth in his possession; he would not rest until it had been distributed to those in need. And famously, when he conquered Mecca with an army of ten thousands Muslims, after two decades of the persecution, torture and killing of his people at the hands of its inhabitants, he forgave them, and guaranteed them their safety, and indeed comforted them, blessings and peace be upon him.

Yet it is not just the moral conduct of the Holy Prophet, blessings and peace be upon him, that is the main human source of inspiration for Muslims; his ongoing spiritual effulgence is also a constant source of comfort and internal joy for believers. All of the Sufi orders – and other sources of Islamic spirituality, such as the followers of the great Kurdish sage Imam Said Nursi – trace their spiritual lineage to the Prophet, blessings and peace be upon him, the Perfect Man (al-insān al-kāmil). Through the “Prayer on the Prophet” (for which numerous formulas exist, and by means of which a believer sends blessings on the Prophet in accordance with the enjoinder in the Qur’anic verse Verily God and His angels invoke blessings upon the Prophet. O you who believe, invoke blessings upon him and greetings of peace (the Chapter of the Clans, 33:56)), Muslims stay ever connected to the light of the spirit of the Holy Prophet, blessings and peace be upon him, who Muslims believe is spiritually alive in the “isthmus” world (al-barzakh) (to which human souls depart after they leave this world, and dwell for a time before they journey to their final abode in the Hereafter) whence he can communicate with and, by God’s permission, provide spiritual support to some of the elect of God’s saints, and even those who although not having attained sainthood, sincerely travel the path of Islamic spirituality.

Islam teaches that Noah, Abraham, Moses and Jesus were all messengers from God (may peace be upon them all!); these and many others are mentioned specifically by name in the Qur’an. Yet the number of messengers sent by God is not limited to those directly mentioned in the Qur’an, for in the Qur’an itself God tells the Prophet Muḥammad, blessings and peace be upon him, We have sent revelation to you just as We sent revelation to Noah, and the Prophets after him. And We sent revelation to Abraham, Ishmael, Isaac, Jacob, and the Tribes, Jesus and Job, Jonah and Aaron and Solomon, and We gave to David Psalms;  Messengers We have already told you of before, and Messengers We have not told you of; and to Moses God spoke directly (Qur’an The Chapter of Women, 4:163-164). Elsewhere in the Qur’an, we are told that all of the nations of the world have had a warner sent to them We have sent you with the truth as a bearer of good news and as a warner; every nation has been sent a warner (35:24).

Islam teaches that Judaism and Christianity were both originally religions revealed by God – they were the “islams” of their own time, but in the course of time came to be distorted. Many of the Jews allowed their religion to become excessively formalistic and legalist; when Jesus Christ, peace be upon him, came to purify and renew God’s religion, and usher in a new dispensation, many Jews disbelieved in him. In time’s fullness true Christianity too would be distorted. It was not until the 4th century that consensus was reached amongst Christians as to the nature of Christ, but for both Jews and Muslims (and until the 5th century, around half of all Christians), the conclusion they reached – that Jesus is God and that God is three persons – is unacceptably polytheistic.

* This is an abstract from the article “Understanding Islam” that appeared in the 26th issue.